Version of letter published in NY Daily News on 6.5.15

As you and your office prepare to finalize the city's budget, I urge you to reject NYPD Commissioner Bratton's controversial request to fund 450 new paramilitary cops to his department. You have previously stated that you believe NYPD staffing levels to be adequate, and this statement must apply to Bratton's new request as well. Although Bratton has exploited the fear of ISIS to beef up the already hyper-militarized NYPD, he has not provided concrete information indicating a rise in “terrorist” activity that would justify adding these kinds of cops to the department. Further, in public statements, Bratton has conflated terrorism and “disorder control”, suggesting that these heavily armed, militarily-trained cops would be used at crime scenes and for crowd control and protests. His new request is especially distressing following what seemed to be a small step in the right direction in shutting down the NYPD’s Demographics Unit (also known as the secret Muslim spying unit) last year.

Your budget calls for investments to protect the city's most vulnerable populations, with funding earmarked for youth and children, mental health services, and workers. If these investments are meant to foster a culture in the city where families and neighborhoods thrive, a simultaneous investment in paramilitary policing sends a contradictory message to us New Yorkers, who have repeatedly rejected this type of patrol on our streets.

Since the timing of this request comes at a time when protests against police violence are at a rise, it suggests that the NYPD sees dissent as a threat rather than the marker of a vibrant, thriving community. Rather than aggravate police/community relations further, I urge you to reject any additional counter-terrorism police to the NYPD, which will only deepen the crisis of police violence and repression faced by our communities. Don't be taken in by Bratton's racist fear mongering. Echoing the War Resisters League’s statement signed by 30 New York community groups, we know that the surest way to maintain healthy, safe neighborhoods is to build up community resources such as liveable housing, quality health care, stable employment, and accessible public spaces.

Send a signal with your budget: End the war on New Yorkers! 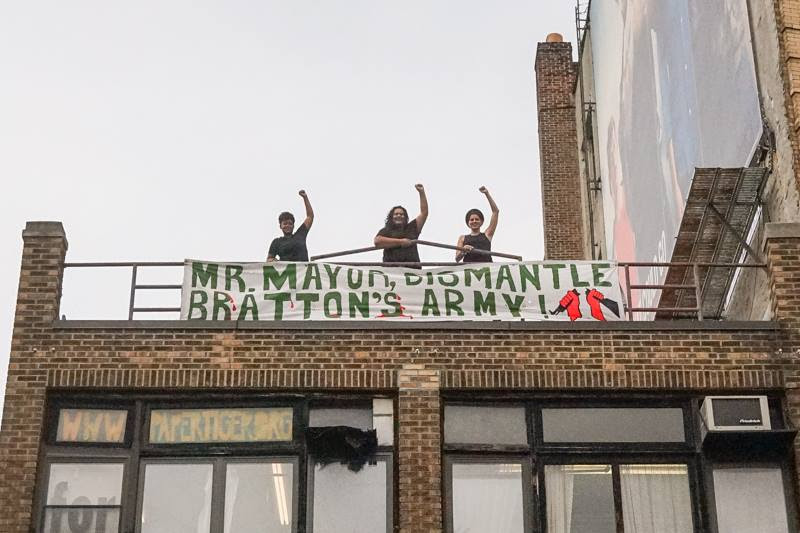