In New York and other cities and towns across the country, peace activists will hold protests, vigils and educational events to observe the 68th anniversary of the US nuclear bombings of Hiroshima and Nagasaki.  If you have planned an action you would like posted here, let us know at wrl [at] warresisters.org

New York City
Saturday, August 10, 2013
Hiroshima/Nagasaki Exhibit, noon to 5 pm, Tompkins Square Park, near the Temperance Fountain (just inside the park SE from Avenue A and St. Marks Place), Manhattan. We'll be displaying the Hiroshima-Nagasaki exhibit (see info below), passing out literature, and talking with passersby. Please join us for a half hour, hour, or more. For more information, please email us at nycwrl [at] att.net or call 718-768-7306.

Tuesday, August 6
(Anniversary of the U.S. nuclear bombing of Hiroshima and the feast of the Transfiguration):
Nonviolent witness at the Pentagon and Udvar Hazy Museum where the Enola Gay is displayed. Times to be decided at the August 5 gathering.

Friday, August 9
(Anniversary of the U.S nuclear bombing of Nagasaki)
10am meet at Dorothy Day House to plan to witness at noon at the White House . 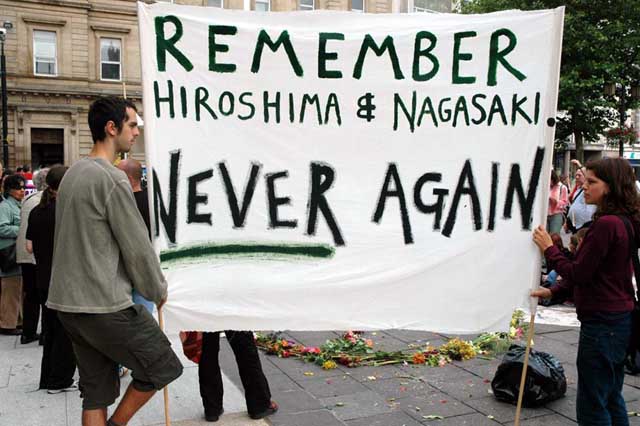 Click here to downloadable the PDF version of the updated Hiroshima/Nagasaki exhibit created by members of the NYC chapter of WRL, detailing the history of the bombings and the emergence of the powerful US anti-nuclear movement. The exhibit can be used as a flyer at events, actions, and vigils commemorating the anniversary of the bombings.