Skip to main content
The People's Human Rights Observatory is an initiative of grassroots and popular organizations in Latin America, the Caribbean and Palestine that seeks to monitor, document, disseminate, promote and demand the protection of Latin American communities Human Rights, Democracy and Social Justice from a perspective of constructing and deepening of resistance, rebellion, memory and popular power. This is an effort of more than 100 organizations, with representation from indigenous leaders, Nobel Peace Prize recipients, feminist groups, agrarian movements, academics and journalists. SOA Watch’s presence in the Observatory is the materialization of active solidarity with Latin American movements and an example of resistance against the oppressive systems perpetuated by the US imperialism. This collective effort is an example of the dignity that unites free peoples protecting their historic memory and autonomy
Eduardo García is an activist and photojournalist born in Mexico City. His work has been focused primarily on the struggles of indigenous peoples in Mexico, Central American migration, forced disappearance and social movements in Latin America. His work as a researcher and photographer has gotten him involved with the Undocumented Migrant Project of the University of Michigan. Eduardo is also co-founder of the Michigan Solidarity Network with Mexico and co-founder of the Militarization in the Americas Research Collective. He studied Political Science at the Universidad de las Americas Puebla, with special interest in political philosophy and Latin American Studies. Lalo, as he is known, began working with School of the Americas Watch (SOA Watch) as a research consultant and then he helped organizing the first SOA Watch Border Convergence. The focus of Lalo’s presentations will be the transnational solidarity being built around the Observatorio de Derechos Humanos de los Pueblos in Oaxaca.
Lalo will also introduce his documentary project, being co-produced with Samantha Demby, about the People’s Observatory and its caravan to the 2017 Border Encuentro, highlighting importance of indigenous and women’s leadership in Observatory and its national and international solidarity actions. 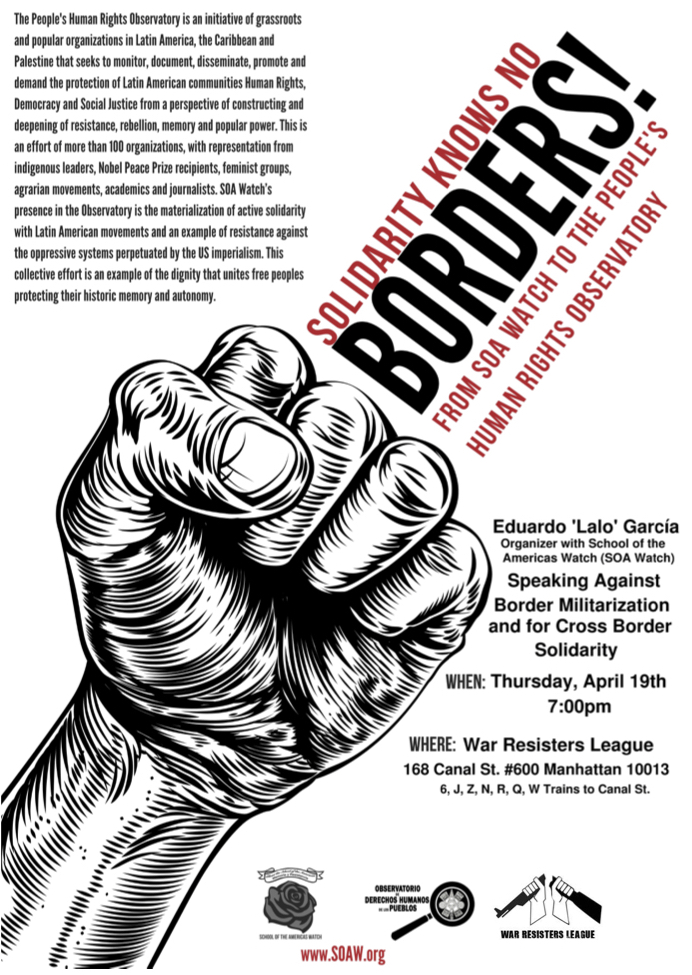