Our comrades in the Rasmea Defense Committee are calling for support!

WHAT CAN YOU DO?

Help spread the word about Rasmea on every social media platform you’re on!

The Rasmea Defense Committee has laid out the possible scenarios and have called for action accordingly:

In October, Rasmea's legal team filed an appeal of her unjust conviction for Unlawful Procurement of Naturalization. A decision on this appeal is expected any day now.

Although we are confident that we will win the appeal and have the conviction overturned, there is a chance—as we reported right before the end of 2015—that the appellate court will uphold the conviction, ruling in favor of the U.S. government. If that happens, it is very likely that Rasmea will be ordered to turn herself in to federal prison authorities, while we petition to keep her out on bail.

If this worst-case scenario decision comes down BEFORE 12 NOON, and Rasmea is ordered to prison, we are calling for protests the VERY SAME DAY at 5 PM at federal buildings across the country.
If the decision comes down AFTER 12 NOON, we are calling for protests the NEXT DAY at 5 PM. Allies and supporters across the world will also be participating in the emergency response by protesting at U.S. consulates and embassies everywhere.

Our 2013 statement: Drop the Charges Against Rasmea Odeh //

On the morning of October 22nd, 2013 agents of the Department of Homeland Security – acting on on behalf of federal prosecutors in the Eastern District of Michigan – arrested Rasmea Yousef Odeh, associate director of the Arab American Action Network and founder of the its Arab Women’s Committee. Based in Chicago, Odeh (who has lived in the US for 20 years and is a US citizen), was charged with “immigration fraud” which authorities claim occurred when she neglected to mention her 1968 arrest in Palestine on her 1994 US immigration application. If convicted, she faces up to 10 years in prison and the possibility of deportation.

War Resisters League condemns in the strongest terms the indictment of Odeh, a long-time Palestinian and Arab American community leader. In addition to the ways that her and many others’ right to freedom have been generally targeted by the criminalization of immigrants in the US, Odeh’s arrest poses other serious questions – such as why the US government feels the need to open a nearly 20-year immigration file at this particular moment. Also problematic is the fact that her original arrest in Palestine was made by a notoriously unjust Israeli criminal court system – which then oversaw her brutal torture while she was in detention. War Resisters International, an international secular nonviolence network affiliated with sections on six continents, will continue to closely monitor this situation.

Our belief in supporting organizing within communities under attack – such as the crucial work for Arab empowerment and women’s rights Odeh was undertaking in Chicago – compels us to place this case in a broader context. Part of that context understands that our enormous prison industrial complex, complete with over 100 political prisoners and prisoners of conscience behind bars, is becoming more and more integrated with the military industrial complex to spread violence across our society. This is not only part of the continuing campaign to monitor and harass Arabs, Muslims and Palestinians in the US, but is also a targeted attack against organizers and progressive leaders in those communities.  We understand the targeting of these community leaders as part of a larger system of state repression aimed at policing protest and dissent to the status quo–one of the key forces behind mass incarceration.

We demand that all charges be dropped immediately and unconditionally! Free all political prisoners! 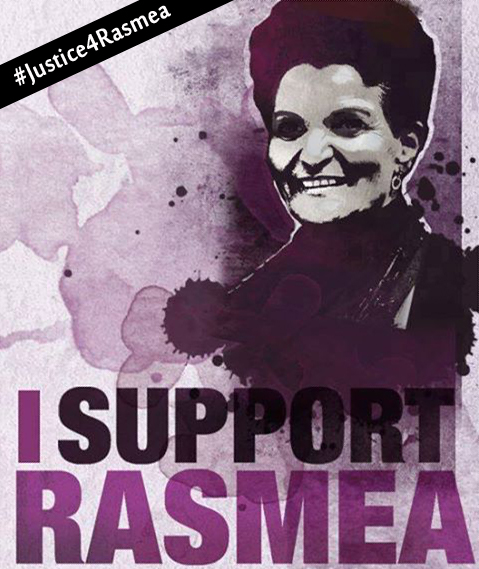