War Resisters League condemns the chemical weapons attack and U.S. military actions of the past week within the context of the catastrophic, six-year Syrian war. We condemn Bashar al Assad regime’s ongoing murder, barrel bombing, chemical and conventional weapons use, torture and imprisonment of Syrian civilians and activists. We condemn every one of the 7,912 US-led International Coalition strikes since 2014 on Syria, resulting in countless civilian casualties. We condemn Russian airstrikes, Iranian ground troops attacking Syrians in alliance with the Syrian Army, and their funding of Bashar al Assad’s regime.

We condemn Trump’s military escalation and proposed increases to an already inflated military budget of $1.45 trillion (nearly half of our total federal budget). We condemn the corporations profiteering off militarism as Raytheon, Lockheed Martin, General Dynamics and Northrop Grumman’s stocks soared this morning. We call on those paying war taxes to recognize federal income taxes pay for U.S. military weaponry-- like the Raytheon Tomahawk missiles dropped last night, each with a price tag of $1.59 million.

We condemn those who systematically practice selective antiwar politics, who have ignored calls from Syrian people to stand with them against a repressive regime and imperialisms of Russia, Iran and the International Coalition. This is not the time for exceptional anti-imperialism. By this we mean an anti-imperialism which condemns only US-imperialism--such as those hosting anti-fascist protests in response to Trump’s missile strikes last night, without recognition for the last six years of repression in Syria. And, for those just now awakening to U.S. militarism and war-making, we must remember to highlight and condemn it all: continued U.S. militarism in Syria, Yemen, Iraq, Somalia, Libya now, or the Obama administration’s dropping of 26,172 bombs in these countries, as well as Afghanistan and Pakistan last year.

We call for strategic thinking by movement leaders, in the U.S. and beyond, to act in deep solidarity with those who stood for Syrian Revolution in 2011 and everyday since; for Syrians who have died, endured unjust conditions, and fled in search of refuge to face closed borders, travel bans, and inadequate, nonexistent, or unsafe shelter. Against cynicism and despair, militarism and empires, we stand with Syrians surviving and fighting for self determination and justice. End all airstrikes, all occupations of Syria. We demand accountability for all war crimes + freedom for Syrians!

If you are mobilizing to an action today that is only in response to the U.S. missile strikes last night, bring expanded messaging about the Syrian revolution and a true antimilitarist stance against all bombing and attacking of Syrians, so that we can educate each other in and out of the streets.

If April 6th, 2017 was the first time you felt compelled to speak out against attacks on Syria, or Syria at all, it is time that you do some political education. We recommend:

Ramah Kudaimi on the book Burning Country: Syrians in Revolution + War on Lit Review
The Home That Was Our Country
Syria Sources
Syria Speaks: Art + Culture from the Frontline 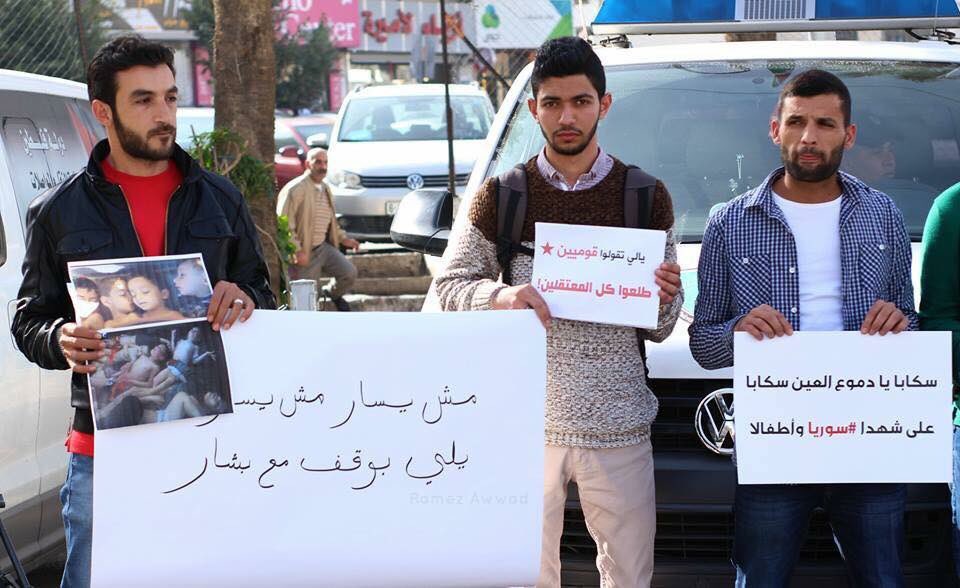 "It's Not 'The Left' If It Stands With Bashar" from @NasserZB