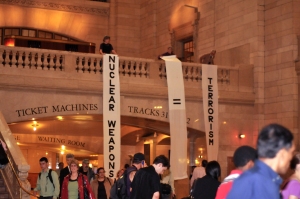 Today in Grand Central, 2,000 flyers were distributed to hundreds of passersby who engaged with members of the War Resisters League and many other organizations, including Peace Action, South Asia Solidarity Initiative, Think Outside the Bomb, and Physicians for Social Responsibility, about nuclear disarmament.

Read this statement written on the day of the May 3rd action and see WRL's anti-nuclear blog for more photos and follow-up from the action and all of this weekend's events.

Today in Grand Central, 2,000 flyers were distributed to hundreds of passersby who engaged with members of the War Resisters League and many other organizations, including Peace Action, South Asia Solidarity Initiative, Think Outside the Bomb, and Physicians for Social Responsibility, about nuclear disarmament.

At 8am sharp, anti-nuclear activists and people concerned about the direction of the U.S. government’s nuclear policies and ongoing militarism gathered in the center of the main hall of Grand Central to call for “Peace without Nuclear Weapons” and to start the global disarmament process here in the U.S., the only country to have used the bomb. Participants circled the center kiosk and talked with people rushing to start their days about the UN conference starting only a few blocks away from where we were, in which delegates representing the peoples of the world were beginning talks about nuclear nonproliferation.

The message of the War Resisters League to those delegates at the NPT review conference, and particularly those representing the people of the U.S., is that talk is not simply enough. We will continue to push our government towards complete unilateral disarmament and work to build and strengthen the anti-nuclear movement here at home. Through our signs, leaflets, banners, and discussions with the folks who talked with us, we communicated a clear message that nuclear weapons do not make us safe.

At 9am, this message was presented to commuters in Grand Central through a coordinated banner drop over the railings overlooking one side of the main hall. Our banners read “Talk Less, Disarm More” and “Nuclear Weapons = Terrorism.” 22 people were arrested in total during the banner drop and the die-in on the floor of the station that followed. Supporters of the die-in circled the group as the police stepped in to make arrests, many of us singing “Down by the Riverside.”

The official “nuclear posture” of the U.S. government under the Obama administration is one that maintains the option of “first strike” against any country that is deemed threatening to the U.S. (e.g. those harboring alleged terrorists) while insisting that it is other nations such as Iran, North Korea, and Pakistan who are to blame for the necessity of nuclear weapons.

Our action today made clear that the United States is a central global perpetrator of nuclear terrorism as, along with Russia, it maintains 95% of the world’s nuclear weapons, about half of which are deployed throughout the world. Nuclear terrorism in one central way in which the U.S. maintains its ongoing imperialist wars and occupations in West and South Asia and spends our taxpayer dollars to do so. The U.S. must be held accountable both internationally and by its own people.

Kathy Kelly from Voices for Creative Nonviolence, who received the WRL Peace Award at a special ceremony at Community Church yesterday evening, shared with us a special story during her acceptance speech. She spoke of a recent Skype conversation that she and a few others had with a group of young people in Afghanistan not too long ago. It was MLK day and Kathy and the others in their group thought it might be nice to share some information with them about Dr. King, a former leader of civil rights and antiwar struggles in the U.S. Kathy noted that not only did they already know about Dr. King, but this group of Afghan young people proceeded to tell them some of their favorite quotes from his speeches.

The people of the world know that there are people working for the end of U.S. militarism from within its own borders, and that the voice and leadership of this movement is growing. It is with the hope that comes with this knowledge and in the spirit of solidarity with the peoples most directly affected by U.S. imperialism and domination that WRL says: “No Nukes: Begin with U.S.”