War always lands hardest on the working class. So WRL’s Chicago local is known for its alliance with labor. When it became a local ten years ago, under the leadership of Charles Paid- ock, it worked closely with Chicago Labor Against the War. “We shared meeting space on Sheffield and collaborated on speakers from the strong unions in the city,” says Paidock. “In fact, that’s where I see WRL as having a voice in Chicago, working to involve groups that can sometimes feel marginalized in the antiwar movement.”

Today, that alliance also includes ethnic groups sometimes underrepresented in anti-war activity. Among the events planned by the local is a book party to introduce WRL’s We Have Not Been Moved: Resisting Racism and Militarism in 21st Century America to Chicago audiences. The book features an essay by Jose Lopez of the Puerto Rican Cultural Center. If all goes as planned, Lopez will be joined by Matt Meyer, one of the editors, in several celebrations throughout the city which will also commemorate the WRL 90th anniversary.

All of 2012 has been a busy year for the Chicago WRL, with activities centering on preparing for and participating in the NATO protests on May 20. (See http://www.wrlchicago.org/ for a slide-show from the NATO protest.) Running up to the event, members helped to form a loose coalition to train Chicago activists in nonviolence and sponsored trainings both in the loop and in nearby Evanston. In April, local WRL members hosted staffers Ali Issa and Kimber Heinz for a workshop at the Occupy winter headquarters, working with the Grassroots Global Justice Alliance. Their training was titled “Budgets and Bombs: The U.S. Role in NATO and G8.”

Rosalie Riegle and J. Wade Hannon spoke and leafleted at Occupy’s Chicago Spring event in Grant Park and a few weeks later Hannon gave the May Day speech at the venerable College of Complexes. A long-time WRl member who recently moved to Chicago, Hannon reminded the large audience that “the only way we can build an egalitarian future is through action that is guided by an abhorrence of violence and a respect for our fellow human beings.”

WRL was also well-represented at two conferences held before the NATO protest. Chicago WRL’s Dale Lehman facilitated many of the arrangements for the People’s Summit, held at the Chicago Occupy winter headquarters, where Wade Hannon represented WRL on a panel on resistance tactics. At the Counter-Summit for a NATO-Free Future held just before the Sunday protest, Kimber Heintz presided as one of the co-chairs.

Also traveling to Chicago for the Counter-Summit and the protest were two welcomed WRI members, Anna Sanne Göransson, and Andrea Pettersson of Sweden. They gave a workshop about their work with Ofog and what’s next for NATO protests around the globe, concluding with a keynote to the entire group which showcased videos of anti-NATO work in Europe. Ofog translates as “making mischief” and on the day after the huge anti-NATO march down Michigan Avenue, Göransson and Petterson told Chicago WRL members exactly how they “make mischief” in Sweden and elsewhere. Attending were two of the Iraq veterans who had returned their medals at the conclusion of the Sunday march. They were joined by their “grandfathers,” several leaders from Vietnam Veterans Against the War. 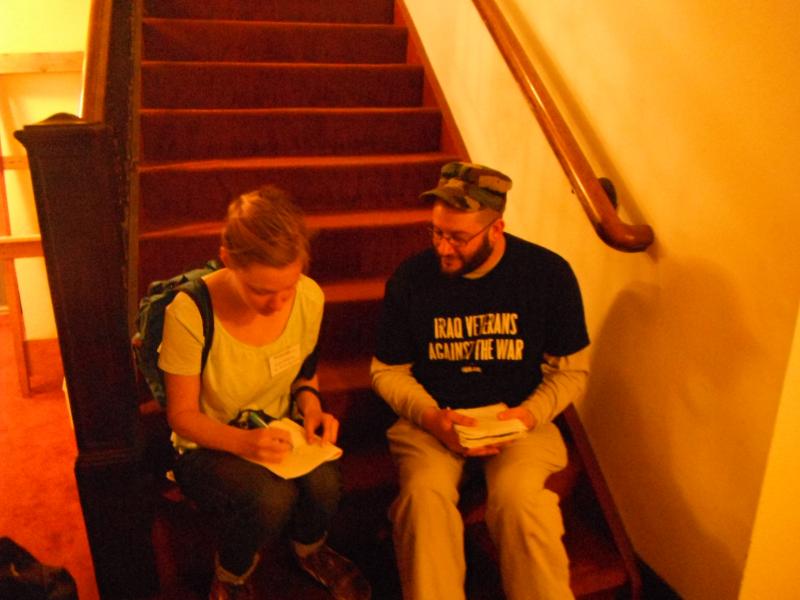 Currently, Chicago WRL is working with the No Drones Coalition. Long-time activist Brad Lyttle joined the Illinois contingent of the Coalition for a protest at the Air and Water Show in August. Lyttle says he was “born a pacifist” and if you ask him, will tell you about his protests at the Nevada Test site and Mead Air Force Base (now Offut) in the 50s, the Peace Walk to Moscow, and early protests against the Trident Submarines in Connecticut. Lyttle was tear-gassed, along with many, many others, at the 1968 Democratic Convention in Chicago. His story and many others are online at facingteargas.tumblr.com.

Chicago WRL invites any visitors to our city to contact us before you come. We will be happy to provide hospitality and to plug visitors into anti-war actions while they’re in town. Contact Charles Paidock at cpaidock [at] hotmail.com or Rosalie Riegle at riegle [at] svsu.edu.