WIN first appeared January 15, 1966. It was published by the New York Workshop in Nonviolence, sponsored by both Committee for Nonviolent Action (CNVA) and War Resisters League. The timing was fortuitous. WIN appeared as the United States was entering years of tumult. This rapidly changing world gave WIN a variety of opportunities and challenges, including:

The lead article is “The Washington March,” by Martin Jezer—with the delicious subtitle, “proselytizing the liberals.”  It is followed by reports by Don Newlove and Bradford Lyttle, respectively, on a peace rally at New York City’s Herald Square during the Christmas rush and a civil disobedience demonstra- tion (14 arrests) at the Boeing-Vertol helicopter factory near Philadelphia. The next 10 pages are devoted to reviews—written mainly by Paul Johnson—of books and magazines about the war.

All in all, an excellent issue, both hip and well written.

No editors are credited. A staff list did not appear until Issue 3, February 11, 1966. It named Marty and Paul as “editors this issue.” They were the ones who had persuaded the Workshop in Nonviolence to publish a magazine. Other staff members listed are Henry Bass, Judy Brink, Maris Cakars, Leonard Fetzer, Rebecca Johnson, Dorothy Lane, Martin Mitchell, Gwen Reyes, Bonnie Stretch, and Robert Sievert. 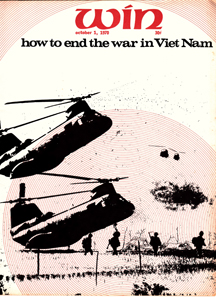 Maris Cakars was the third major figure at WIN. When the magazine began, he thought of himself primarily as an orga- nizer and was concerned that work on the magazine might take energy away from organizing demonstrations—the heart of the Workshop; but by issue 2, January 28, 1966, Maris stepped up as a writer, contributing a strong essay, “The Political Relevance of Public Witness.” And it was Maris who championed WIN for years.

Issue 3 also contains the first examples of what is probably WIN’s greatest contribution to journal- ism—coverage of demonstrations with first-person accounts by several participants, woven together to create vivid, multi-di-mensional reports. The same issue also marks the first appear- ance of Henry Bass’s “Alphabet Soup,” an effort to make sense of the myriad progressive organizations known by their initials.

With Issue 16, October 5, 1966, WIN went national, distributed by both CNVA and WRL, and I became managing editor. I found myself working on an exciting and relevant magazine, well edited and well written by the peace workers and writers who started it, helpful to and loved by nonviolent activists everywhere and making a real contribution. We were off on the long, difficult, and gratifying struggle to end the Vietnam War.

Markley Morris (called Mark Morris back then) was the first Managing Editor of the original WIN magazine. After six issues, seeing WIN was in splendid shape, he moved on to other work but remained close to WIN, contributing graphics and writing over the years. He is now 81, lives in San Francisco, and takes part in a weekly Quaker vigil against all wars. See his website about the LGBT civil disobedience at the Supreme Court in 1987: supremecourtcd.org/Home.html