A Chapter Ends…the Story Goes On 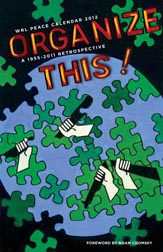 “My relationship with the WRL Peace Calendar began over the 1968 Thanksgiving weekend when volunteers sat around a table stuffing the just-off-the-presses spiral-bound datebooks into envelopes,” writes former staffer Wendy Schwartz in her afterword for WRL’s 2012 Peace Calendar, Organize This! “Ralph DiGia, the most effective motivator of volunteers who ever lived, cajoled us to work faster, dispensed band aids to victims of the sharp binding wires, and refilled our beer glasses.”

Wendy’s afterword tells part of the history of the Peace Calendar, which began in 1955 when War Resisters League staff organizer Igal Roodenko, a printer by trade, put together the first one. Over the next 57 years, the calendar became a significant part of how people who cared about peace and justice encountered WRL, learned of our commitment to nonviolence, and joined us in the goal of ending war and the causes of war.

But times change. Declining sales have made the calendar increasingly less cost effective as a fundraiser, and the digital age has made the paper datebook obsolete for many. Organize This!, the 2012 edition, is therefore the last annual WRL Peace Calendar. Fittingly, it is a retrospective of all of the calendars that preceded it, capturing their range with striking full-color images of every one of the 56 covers. It includes contributions from one more activist-luminary (an introduction by political theorist and author Noam Chomsky), one more WRL staff member (the preface by its editor, Development and Membership Coordinator Liz Roberts), and one of the hundreds who worked on earlier calendars (Wendy Schwartz’s afterword).

A more-than-half a century tradition, WRL’s Peace Calendars, full of eloquence and gorgeous art, have been a tremendous communal effort. Contributors have included the mayors of Hiroshima and Nagasaki, civil rights icon Coretta Scott King, labor movement giant A. Philip Randolph, comedian Dick Gregory, poets Denise Levertov and Grace Paley, actors Ed Asner and Ruby Dee, parenting guru Dr. Benjamin Spock, activists and writers Susan Brownmiller, Howard Zinn, and David Dellinger, cultural workers Pete Seeger and John Sayles, and Nobel laureates Archbishop Desmond Tutu and Adolfo Pérez Esquivel. Through the years, the calendars’ fantastic images were donated by dozens of renowned artists including Ben Shahn, Rini Templeton, Ivan Chermayeff, Mary Frank, Peg Averill, Vera B. Williams, and the Bread and Puppet Theater. The calendars were put together by WRL staffers like Igal, Wendy, Liz, Karl Bissinger, and Ruth Benn, designers like Luba Lukova and Rick Bickhart, and countless volunteers. (The writers of this article are proud to be among those who edited a number of them.) Thousands upon thousands have bought them, used them, and given them as gifts.

Closing the book on the Peace Calendar ends only one chapter of WRL’s long, productive effort to resist militarism and war. WRL will celebrate its 90th birthday in 2013, and the 21st century has brought new ways for us to reach more people with our message (as well as generate income for our programs).

Meanwhile, that chapter is preserved for all time in Organize This!, which is both a look back at WRL’s past and a kickoff to our next 90 years. This final Peace Calendar highlights the ways WRL has continued over the decades to adapt to a changing world, even as its overarching message remains the same: We don’t have to make war, and we will resist the making of war at all levels. This last edition is to be shared and cherished, as the power of the calendar themes and the beauty of their images will move you to tears…and action! Buyer beware: Organize This! will propel you into the streets!

Judith Mahoney Pasternak, WRL staffer 1995–2005 and since then member of its National Committee, edited the 2009 calendar, co-edited the 2007 and 2011 calendars, and worked in one or another capacity on most of the calendars published over her 16 years and counting with WRL. Jim Haber has been a member of the WRL National Committee since 2002. He is the Coordinator of Nevada Desert Experience and lives in Las Vegas. He was editor of the 2008 WRL Peace Calendar, Salaam, Shalom, Solh: Nonviolent Resistance in the Middle East and Beyond.

Jim Haber has been a member of War Resisters League for many years, and served for over a decade on WRL's National Committee.  He is an active member of Jewish Voice for Peace, and is a long-standing member of the Catholic Worker movement. He recently completed a five year stint as coordinator of Nevada Desert Experience, which organizes interfaith resistance to nuclear weapons and war. He lives in San Francisco, California.

Judith Mahoney Pasternak, Paris-based activist-writer, is a veteran journalist in the alternative media, author of several books on travel and popular culture, and the former editor of WRL’s The Nonviolent Activist, the earlier incarnation of WIN. Her activist training was in the Second Wave of the feminist movement; since then, she has worked for peace, for social and economic justice, and for justice and self-determination for Palestine.