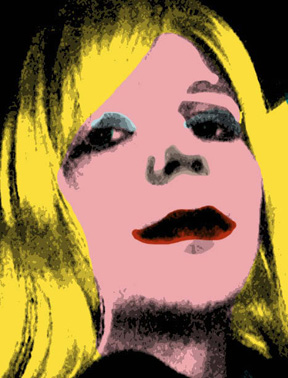 Everybody wants a piece of a hero. As we saw recently with the passing of South African revolutionary Nelson Mandela, whenever a great leader dies, interest groups tend to frame that life in terms of their own agendas and talking points. We are not exempt. Those of us working to end war will share an antimilitarist sentiment; if we count ourselves feminists, we will laud our idol’s support of women’s rights. In reaching to claim part of that legacy, we often oversimplify what may constitute years and even decades of struggle. Our champion is not even around to object.

Chelsea Manning is still with us. The whistleblower who gave us the “Collateral Murder” video and hundreds of thousands of government files documenting U.S. human rights abuses, cover-ups, and spying has received her sentence and is finally able to issue public statements and to write and receive letters. And yet, we hardly know her. By the time we heard of her, she was in military custody on charges of disclosing classified information.

We knew that what she had done—if she had in fact done it—was unimaginable, epic, game-changing. As the revelations continued and the scope of her leaks became clear, supporters rallied around her, creating signs, stickers, and entire campaigns with her face and the name “Bradley Manning.” However, in advocating for her, supporters also created a persona for her, an identity that could embody the resistance to the war in Iraq and the lies that spurred it on. Not that anyone did this intentionally. Her confinement necessarily created what she would later describe as a “substantial disconnect” between herself and what was being said publicly on her behalf. When mainstream media asked, “Hero or traitor?” supporters needed to deliver a solid “Hero.” But what we gave up in exchange for a poster child was a complicated, nuanced perception of Manning as having any agency of her own.

When Wired published chats between Manning and Adrian Lamo (the hacker who would eventually turn her in) suggesting that Manning’s gender was not what we had all assumed, a lot of speculation ensued. The now-ubiquitous photo of her in wig and makeup, which she had evidently emailed to her supervisor sometime around April 2010, started making the rounds, and the public became aware of her gender questioning and alternate online persona. Private IM chat logs and a leaked photo led some feminists and trans advocates to insist that we refer to Manning using feminine pronouns and her “preferred” name—Breanna. In December 2011, Jos Truitt wrote on the popular feminist blog Feministing: “Yes, Manning is a woman named Breanna.” To be fair, she was half right.

Two months later, Rainey Reitman of the Bradley Manning Support Network Steering Committee published an article in the Washington Blade, reminding us that Manning had not asked us to do anything of the kind and urging supporters to not speak for someone just because that person was being silenced. Reitman refers to communication between the support network and Manning’s aunt and lawyer, in which they indicated that Manning preferred the name “Bradley.” She wrote, “None of us has the right to switch pronouns for Manning unless he tells us otherwise.”

Days after Manning came out as transgender on the “Today” show, Kate Bornstein, self-appointed “auntie” of trans people everywhere, welcomed Manning to womanhood in an open letter on the Out Magazine website. Or rather, she welcomed her to “girlhood,” saying, “It’s easier to use the labels boy and girl than man and woman. Men and women—both cisgender and transgender—are very possessive about those labels.” Bornstein’s photo appeared side by side with the photo of Manning in a wig at the top of the page.

The letter was warm and familial and may have brought great comfort to the imprisoned Manning. And Bornstein has certainly earned her acclaim among trans and gender-nonconforming communities through decades of highly influential writing, speaking, and advocacy. Yet the paternalistic tone she took and the assumptions she made (e.g., that tweezing her eyebrows will help Manning feel happier about her body) did little to uphold Manning’s agency. Additionally, Bornstein’s letter lacks any critique of militarism or the false pretenses under which the United States continues to wage war in Iraq. She writes, “You’ve been a member of the U.S. military. You know what it means to fight an enemy,” ignoring everything Manning has done to open our eyes to the kind of warfare that she has seen, in which the “enemy” targets are often civilians and sometimes children.

Gay and trans advocates were not the only ones claiming Chelsea Manning as a member of their tribe. Courage to Resist, while an explicitly antiwar group, values “informed resistance” and supports a spectrum of resistance inside and outside military ranks, including fundraising for legal defense. So its support of Manning was within its scope and did not impose a set of values on her beyond what she herself had identified: transparency and accountability. From there, however, it was an easy logical leap for many to assume that Manning’s intentions were in line with the conscientious objectors and antimilitarists who took up her cause.

Notably, she felt the need to correct the image being portrayed of her by the International Peace Bureau in granting her the 2013 Sean MacBride peace award. In her first public statement following her sentencing, she clarified her actions as having been motivated by a desire to inform the public, not as against war or for peace. Regarding the award, she wrote, “It seems that I’ve been left out of the process.” In identifying this instance of being left out, she touched on a fundamental division between those who consider themselves advocates and those for whom they advocate. Beyond hero worship or promoting identity politics, the claiming of Chelsea spotlights a tendency on the part of advocates and activists to speak for those who they see as lacking a voice of their own.

Iraq Veterans Against the War (IVAW), another antiwar organization that has supported Manning throughout her ordeal, issued a thoughtful, informed statement following her coming out that upheld her right to self-determination and drew on intersections among militarism, capitalism, transphobia, and incarceration. In it, IVAW took the opportunity to educate its members about the particular challenges faced by trans veterans and prisoners and to recommit to “stand[ing] behind Chelsea Manning, not in spite of her announcement, but in complete support and celebration of it.”

Calvin used to edit WIN magazine under a different name and set of pronouns. These days he can be found working, performing, and generally causing trouble in small-town New England.