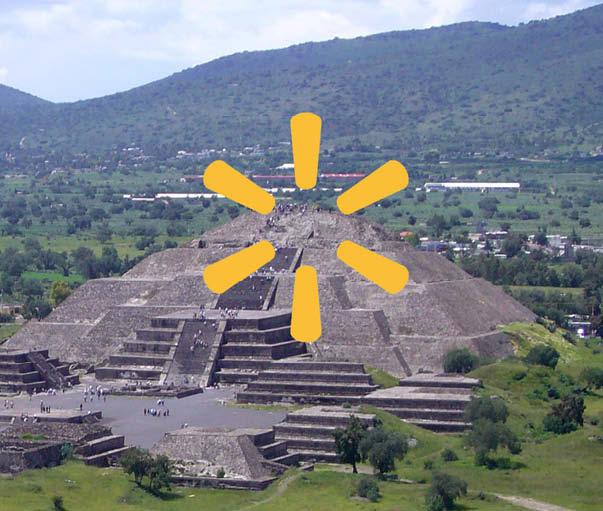 Early in 2004 a lawyer at Walmart de México, Sergio Cicero Zapata, was passed over for a promotion. Upset by the slight and concerned that he might be held liable for some of the company’s activities, he resigned that September. One year later, he decided to come clean. He sent an email to Maritza Munich, the general counsel for Walmart International, offering to meet with her to discuss “irregularities” at the Mexican subsidiary that he said had been authorized “at the highest levels.”

Munich promptly launched an internal investigation. After interviewing Cicero and studying company documents, Munich’s investigators determined that Walmart de México had spent millions on bribes to speed up building permits for its stores, often circumventing zoning and environmental regulations. These bribes, a violation of both Mexican and U.S. laws, were apparently a major force behind the company’s dramatic growth in Mexico. The Walmart subsidiary now has more than 2000 stores in Mexico and 200,000 employees; it has become the country’s largest private employer.

Cicero’s revelations had the potential to rip a big hole in the clean-cut corporate image that Walmart had constructed through years of advertising and friendly coverage in the U.S. media, and the damage to the world’s largest retailer could have had serious repercussions for the rest of Corporate America. But the story was suppressed for more than six years; it still hasn’t had the impact that it could and should have.

The internal investigators reported their findings to the company’s headquarters in Bentonville, AR, recommending a more thorough inquiry. Instead, top corporate officials decided in February 2006 to turn the investigation over to Walmart’s Mexican executives—the same people implicated in the bribery scheme.

There could be little doubt about how Walmart de México’s officers would handle the case. In March 2004 an auditor had reported some suspicious “facilitating payments” for store permits; management quickly fired the auditor. The executives followed the same general plan with Sergio Cicero, denying that there had been bribery and charging that Cicero himself had been embezzling from the company. They even threatened to bring “criminal actions” against their former employee, despite the lack of any evidence.

When the scandal finally broke, it was the result of an investigation by New York Times reporters, principally David Barstow, who laid out the extent of the bribery, totaling more than $24 million, in a lengthy front-page article in April 2012. A follow-up article in December described how Walmart had used some of the bribes to place a store within the protected archeological zone around the historic first millennium ruins at Teotihuacán.

A scandal is hard to ignore after it has appeared on the front page of the U.S. “newspaper of record.” The U.S. Justice Department is now investigating, and Walmart seems likely to end up with a fine for its violations of the Foreign Corrupt Practices Act. Two members of the U.S. Congress, Reps. Henry Waxman (D-CA) and Elijah Cummings (D-MD), started their own investigation; in January 2013 they released three internal Walmart emails they had received from a confidential source.

But the overall response to the Times articles could be best described as a second cover-up. The U.S. media generally portrayed Walmart’s bribery campaign not as an example of corporate corruption but as a case of U.S. executives being corrupted by graft-prone foreigners. “The scandal tells you that doing business in the world’s fastest-growing markets can be fraught with peril,” Time magazine announced. Walmart had become the victim.

After issuing its excuses for the giant retailer, the U.S. press has generally ignored the story.

Truth and Its Consequences

Exposing Walmart seems not to have brought any benefits to Sergio Cicero, even after the Times covered the case. In January 2013 the governor of the Mexican state of Morelos, Graco Ramírez Garrido Abreu, sued Cicero for libel. One of the emails that Reps. Waxman and Cummings released quoted Cicero to the effect that Ramírez, then a Congress member for the center-left Party of the Democratic Revolution (PRD), had “negotiated” a $2 million “contribution” to the Mexico City government in 2003 and 2004, at a time when Walmart was seeking new sites in the capital. The suit was dropped in July after Cicero signed a statement saying he didn’t know Ramírez and had never had dealings with him.

Despite his key role in exposing Walmart, Cicero is hardly the most sympathetic of whistle-blowers. He was involved in the bribery scheme himself, and he left Walmart in 2004 with severance benefits and a $25,000 bonus; he then went into business for himself. By Mexican standards he got off easy.

Lydia Cacho Ribeiro is a writer and a feminist activist based in Cancún. In 2005 she published a book, Los Demonios de Edén (“The Demons of Eden”), exposing a pedophile ring run by a millionaire Cancún hotel owner, Jean Succar Kuri. Cacho charged that Succar was being protected by business owner Kamel Nacif Borge, known as the “King of Denim” because of the jeans produced by a chain of maquiladoras (tax-exempt assembly plants) he was operating in Puebla state. Nacif telephoned his friend Mario Marín Torres, Puebla’s governor at the time, to complain. In December 2005 a group of Puebla state police traveled 900 miles to Cancún to arrest Cacho; they brought her back to Puebla, charged her with defamation, and put her in prison, threatening that she would be raped there.

Cacho was already fairly well known in Mexico. Human rights activists and left-leaning mainstream media like the daily La Jornada moved quickly to publicize the abduction, and the writer was released on bail after 30 hours of imprisonment. The charges were eventually dropped. We don’t know what would have happened to others in Cacho’s situation, or how many potential whistle-blowers have been stopped in Mexico by fear of the consequences of exposing the powerful.

Getting It All Together

Cacho’s kidnapping didn’t get much attention north of the border, not even from progressive activists, despite the importance of her revelations for social movements here.

The relevance for activists fighting sex trafficking and sex tourism is obvious, but anti-sweatshop activists also had reasons to defend Cacho and publicize her work. In 2005 maquiladora owners in Puebla state were using their influence with the state government to suppress organizing efforts at their plants. Kamel Nacif, the most important of these owners, was in charge of the Mexican operations of the U.S.-based Tarrant Group apparel firm, which supplied U.S. brands like Gap Inc., Levi’s, and Tommy Hilfiger. Tarrant Group’s management seems to have understood the possibilities for embarrassment: the company is no longer associated with Nacif, and in 2009 its name was changed to Sunshine Brands.

This is just one of the company’s many current public relations headaches. In June 2012, less than two months after the first Times article appeared, a spy from a Walmart PR firm was caught posing as a reporter at a Los Angeles press conference sponsored by a labor group, Warehouse Workers United. In November at least 117 garment workers died in a fire at the Tazreen Fashion factory in Bangladesh, a Walmart supplier. Six months later, 1,132 or more Bangladeshi garment workers were killed in the April 2013 collapse of the Rana Plaza factory complex, which housed Walmart suppliers. Since then Walmart has stood out as the leading force behind the refusal of most U.S. apparel manufacturers and retailers to join European firms in signing an accord for plant safety in Bangladesh.

All this coincides with organizing and wildcat strikes by workers at U.S. warehouses contracting with Walmart and with the OUR Walmart organizing drive among the company’s own “associates”—at a time of widespread disillusionment with U.S. corporate culture. Walmart’s various scandals would be an ideal vehicle for raising popular consciousness about capitalist realities if labor organizers, anti-sweatshop activists, human rights workers, and alternative media united around a coordinated campaign focusing on the retailer’s repeated abuses.

This would also be a signal to potential whistle-blowers around the world, who might be more willing to face the many risks of coming forward if they saw that activists here were ready to defend them and to make good use of their revelations. We could look forward to many more exposés of the rapidly decomposing underside of corporate globalization.

David L. Wilson is co-author, with Jane Guskin, of The Politics of Immigration: Questions and Answers, Monthly Review Press, July 2007. He also co-edits Weekly News Update on the Americas, a summary of news from Latin America and the Caribbean.