Carrying outrage, compassion, and tourist visas, 25 U.S. activists began an 80-mile-march from Santiago, Cuba, on December 5, in the hopes reaching the U.S. Naval Base at Guantánamo Bay and visiting prisoners detained there under horrific conditions. The activists, drawn largely from Catholic Worker communities across the United States, named their journey “Witness Against Torture,” to shed light on the often-forgotten or excused practice of torture in places like Guantánamo, and to affirm the humanity and dignity of the detainees inside. In a statement, marcher and WRL board member Frida Berrigan said, “Torture is terrorism. What the U.S. government is doing in our name and with our money is a crime against humanity.” 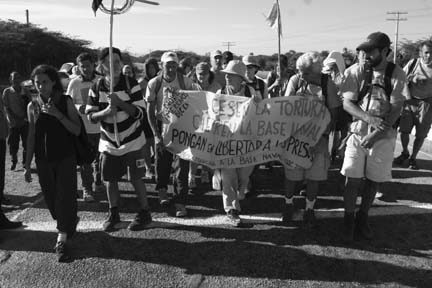 After five days of marching, they arrived at the base on December 10, Human Rights Day, and demanded to visit the prisoners—calling upon the Bush administration and Capt. Mark Leary, commander of the Guantánamo Base, to grant them access. Denied their request, the activists camped and fasted outside the base for three days, at which point the group headed home with the promise to continue such actions in the future. To learn more about and support the march, visit www.witnesstorture.org.