Over the past several years, War Resisters League has developed several interactive, popular education workshops that deal variously with: the war economy, tear gas, police militarization, and the complex role of identity in organizing, all with an eye towards day-to-day libratory organizing and training. This page then, gathers some of those efforts, often in partnership with activist groups, and offers them for download. Let's go! 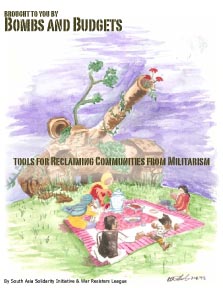 Brought to You by Bombs and Budgets: Tools for Reclaiming Communities from Militarism

To mark the now decade-long US-led “Global War on Terror,” The War Resisters League and the South Asia Solidarity Initiative created an interactive, popular eduction-style workshop that explores how organizing against federal military spending relates to and can forward local campaigns for economic justice, as well as how the past decade of war has effected Afghans and what they are doing in response. Brought to You by Bombs and Budgets: Tools for Reclaiming Communities from Militarism, tries to get to the how of "bringing the war dollars home", as more and more people recognize the brutality and wastefulness of occupation.

Download Brought to You by Bombs and Budgets: Tools for Reclaiming Communities from Militarism 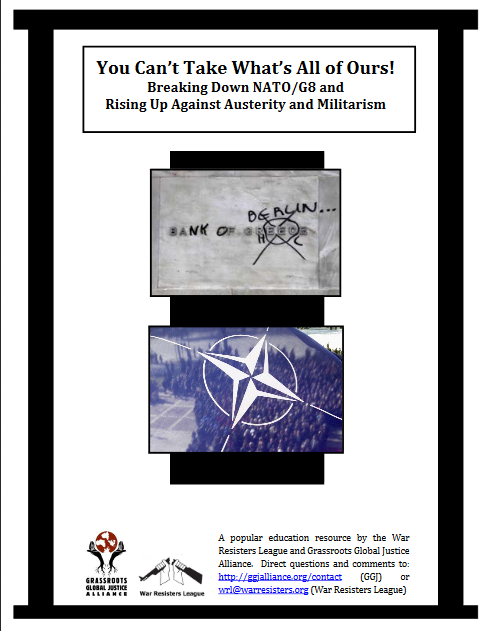 "You Can't Take What's All of Ours": Breaking Down NATO/G8 and Rising Up Against Militarism and Austerity

To mark the NATO summit to be held May 2012 in Chicago and the simultaneous G8  summit  to  be  held  in  Camp  David, Maryland,  War  Resisters  League  and  the  Grassroots Global Justice Alliance release a new popular education resource.

This participatory workshop explores: The  story  of  NATO  and  G8:  who  makes  them  up,  what  they  do,  and  how  they  have grown over time; How  NATO  and  G8  have  worked  together  to  profit  from  and  control  most  areas  of  the world, especially the Global South; How  the  countries  that  control  NATO/G8  have  imposed  an  economic  and/or  military agenda on the people of Afghanistan, Libya, Greece, Iraq and other countries throughout the world, including the U.S.; How  specific  banks  central  to  NATO/G8  countries’  economic  policies  profit  from  militarism; How  struggles  against  economic  austerity, war  and  militarism  are  connected  across  the  globe; and What we can do make the connections for our networks and communities between global and local struggles for justice. 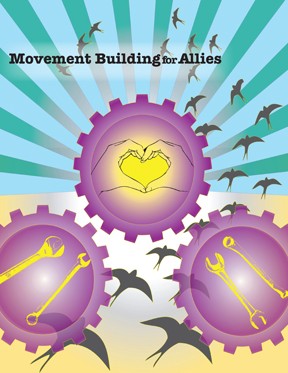 Members and organizations of the traditional peace movement have been increasingly coming to recognize the importance not only of partnering and “joining forces” with groups and organizations led primarily by poor people and people of color, but also of taking leadership from those groups and learning how to be effective allies to them through our organizing efforts.

Movement Building for Allies is a facilitators' manual for a workshop intended for white activists working in groups within the peace movement and other anti-militarist movements who want to deepen their understanding of how to do strategic organizing using an anti-oppression and cross-movement approach.

This includes a focus on how to be strong allies to directly impacted communities (i.e. those whose immediate survival-level needs are impeded by U.S. militarism) through relationship-building and a clear understanding of the root causes of war and

Buy Movement Buiding for Allies online at the WRL Store

An interactive workshop that explores how communities are impacted by militarism as well as what they might do about it - locally and around the world. You Can't Tear Us Apart: Tear Gas, Militarism and Local/Global Solidarity is specially designed for US-based community groups that want to connect their ongoing organizing - whether that be focused on racial or economic justice, ending mass incarceration, or supporting international struggles - to a movement against militarism in all its forms. 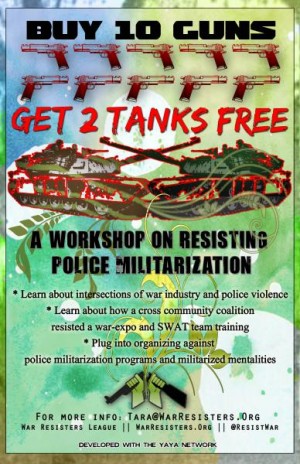 Want to stop police militarization in your community? We can’t build a movement without building consciousness. Our new participatory workshop Buy 10 Guns, Get 2 Tanks Free: A Workshop on Resisting Police Militarization is one such building tool. The workshop, co-created with the Ya-Ya Network, highlights the successful cross-community organizing initiated by Oakland, CA’s Stop Urban Shield Coalition. 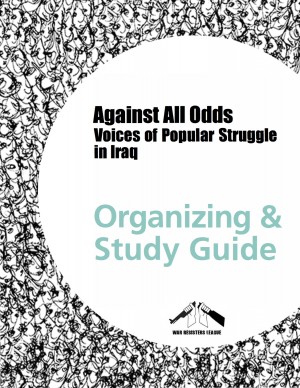 Against All Odds: Organizing & Study Guide

War Resisters League is excited to announce a popular education resource for connecting with Iraqi organizing across borders for activists, organizers and students around the world! We hope this guide supports you in better understanding Against All Odds: Voices of Popular Struggle in Iraq, as well as the work and dreams of Iraqi organizers who are building the Iraq they dare to envision. To connect with organizers in Iraq, check out our Iraq Solidarity page! Contributors to this guide are Amnah Almukhtar, Sara Leana Ahmad, Nico Fonseca, & Ali Issa. Designed by Lama Khoury & Shaheen Qureshi.

​So You Wanna Be A Cop?! Workshop

Do you work with a community targeted by police PR about 'diversifying' their departments? Well download our interactive workshop "HOLD UP! So You Wanna Be a Cop" and tell us how it went! Geared towards young people considering joining the police force, and looking for a well-paying job, this workshop breaks down police recruiter lies, as well as the reasons why a young person wants to be a cop in the first place.