We can't be afraid, we cannot let the police scare us into not doing anything to help our communities." -Kazi Toure, National Jericho Movement, Boston Resident

Last weekend, police and SWAT teams from across Massachusetts arrived in Boston to train in military tactics in the name of "public safety." On that Sunday, STOMP (Stop Oppressive Militarized Police), a coalition of Boston-area community organizations along with the Facing Tear Gas campaign organized a speak out against police militarization on Sunday in the Roxbury neighborhood of Boston, a poor people of color neighborhood hit hard by violence.

Boston Magazine quoted city officials informing the general public about this year's Urban Shield exercises, which simulate emergency scenarios in public places around the city: "Residents should not be alarmed. There is no danger to anyone in the area..."

That statement fell flat for many Bostonians who experience cops on every street corner, surveillance of their mosques and meetings, and military-style SWAT raids carried out in their homes and neighborhoods, often connected to a nonviolent drug charge.

"The war on drugs was never a war on drugs, it was a war on us." - Andrea James, co-founder, Families for Justice as Healing, Roxbury, MA, speaking at Sunday's Speak Out 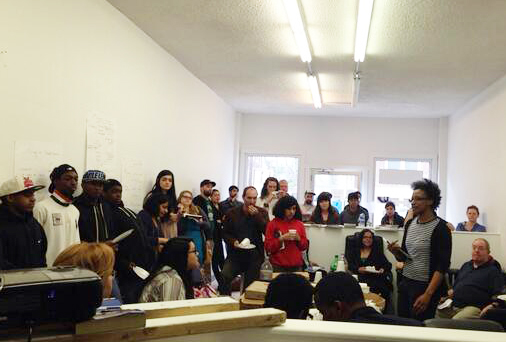 A group of Bostonians including Muslim activists, formerly incarcerated Black residents of Roxbury, people who experienced last April's police lockdown of Watertown, queer liberation organizers, and anti-war activists, dialogued about the government and taxpayer resources (DHS will spend nearly $600 million for these trainings in 2014 alone) that are poured into militarized policing and framed as "emergency preparedness" and "protection." These Boston residents rejected their city's justification of a deepened level of militarization in that name of "public safety."

Facing Tear Gas and STOMP believe that there is a vast amount of power in organizing across communities. In order to roll back militarization, we must harness our collective power. This is only the beginning!

For more on Urban Shield, check out our work in the Bay Area "Stop Urban Shield" coalition on resisting this national police militarization conference.