War Resisters League believes change happens through the implementation of revolutionary nonviolence. Nonviolent Direct Action (NVDA) is powerful. There are many dramatic images of nonviolent action; indeed, the ability to dramatize an issue is one of the strengths of nonviolence. However, this drama doesn't just happen. It gestates – in groups or cells of activists, in discussions, in training sessions, in reflecting on previous experiences, in planning, in experimenting, in making contacts.

As a 97 year old organization, War Resisters League has been training for, and doing, nonviolent direct actions since the 1940's. We ground ourselves in what groups around the world, in the War Resisters International community, have done and how they have done it. As a radical organization, we go to the roots, not only of the problems but also the solutions. WRL declares its commitment to “strive nonviolently for the removal of all the causes of war, including racism, sexism and all forms of exploitation.” While addressing the root causes of war, we also nurture the roots of nonviolent action, recognizing that blooms will be stronger if we root ourselves in nonviolent direct action training and history.

We do not try to present a definitive model, but to suggest methods that have worked in various contexts, that can be adapted by creative nonviolent activists in their own situations. We want to share these lessons with you. 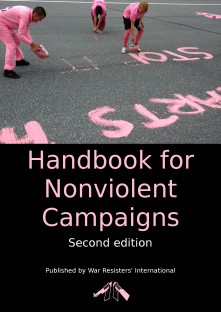 The War Resisters' International's  Handbook for Nonviolent Campaigns is a 232 page toolbox of ideas and resources to support activists to run more effective campaigns. The original edition, published in 2009, was translated into over ten languages, including Spanish, German, Nepalese, Turkish, Russian, Ukrainian, Korean, and Arabic, and has been used by activists all over the world. The 2014 edition added 50 pages.

There is no definitive recipe for successful nonviolent actions and campaigns. This handbook, however, is a series of resources that can inspire and support your own work, especially if you adapt the resources to your own needs and context.

Order your copy on our store today!