A statement from the Family of Father Dan Berrigan, SJ

This afternoon around 2:30, a great soul left this earth. Close family missed the “time of death” by half an hour, but Dan was not alone, held and prayed out of this plane of existence by his friends. We – Liz McAlister, Kate, Jerry and Frida Berrigan, Carla and Marc Berrigan-Pittarelli—were blessed to be among friends—Patrick Walsh, Joe Cosgrove, Father Joe Towle and Maureen McCafferty—able to surround Daniel Berrigan’s body for the afternoon into the evening.

We were able to be with our memories of our Uncle, Friend and Brother in Law—birthdays and baptisms, weddings and wakes, funerals and Christmas dinners, long meals and longer walks, arrests and marches and court appearances.

It was a sacrament to be with Dan and feel his spirit move out of his body and into each of us and into the world. We see our fathers in him—Jerry Berrigan who died in July 2015 and Phil Berrigan who died in December 2002. We see our children in him—we think that little Madeline Vida Berrigan Sheehan-Gaumer (born February 2014) is his pre-incarnation with her dark skin, bright eyes and big ears.

We are bereft. We are so sad. We are aching and wrung out. Our bodies are tired as Dan’s was—after a hip fracture, repeated infections, prolonged frailty. And we are so grateful: for the excellent and conscientious care Dan received at Murray Weigel, for his long life and considerable gifts, for his grace in each of our lives, for his courage and witness and prodigious vocabulary. Dan taught us that every person is a miracle, every person has a story, every person is worthy of respect.

And we are so aware of all he did and all he was and all he created in almost 95 years of life lived with enthusiasm, commitment, seriousness, and almost holy humor. 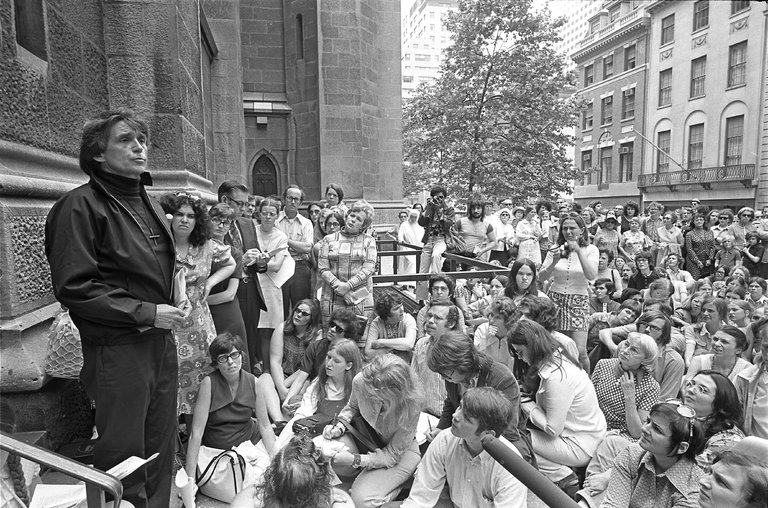 We talked this afternoon of Dan Berrigan’s uncanny sense of ceremony and ritual, his deep appreciation of the feminine, and his ability to be in the right place at the right time. He was not strategic, he was not opportunistic, but he understood solidarity—the power of showing up for people and struggles and communities. We reflect back on his long life and we are in awe of the depth and breadth of his commitment to peace and justice—from the Palestinians’ struggle for land and recognition and justice; to the gay community’s fight for health care, equal rights and humanity; to the fractured and polluted earth that is crying out for nuclear disarmament; to a deep commitment to the imprisoned, the poor, the homeless, the ill and infirm.

We are aware that no one person can pick up this heavy burden, but that there is enough work for each and every one of us. We can all move forward Dan Berrigan’s work for humanity. Dan told an interviewer: “Peacemaking is tough, unfinished, blood-ridden. Everything is worse now than when I started, but I’m at peace. We walk our hope and that’s the only way of keeping it going. We’ve got faith, we’ve got one another, we’ve got religious discipline..." We do have it, all of it, thanks to Dan.

Dan was at peace. He was ready to relinquish his body. His spirit is free, it is alive in the world and it is waiting for you. 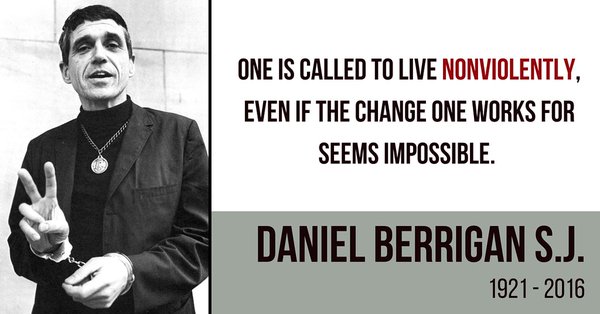