UPDATE:  Hear the presentations from the Memorial for David McReynolds here.
The memorial was held on Saturday, December 1 at 12 PM – 3 PM at Judson Memorial Church in New York.

Scroll down for links to more articles about David.

Early Friday morning, August 17, socialist, photographer, and lifetime War Resisters League member David McReynolds - committed pacifist + socialist - passed peacefully at the age of 88. David was on WRL staff for a large part of his life and remained within community long, long after.

David McReynolds (1929-2018) died at 1:30 this morning, a day after being brought to Beth Israel ICU in Manhattan. He had suffered a fall in his apartment and apparently never regained consciousness.

I first met him during a trip from Austin to NYC in 1970, and three years later joined him as a member of the War Resisters League staff. Though we would periodically differ on tactics and politics, he could always be relied upon as a brilliant, challenging, blunt thinker, speaker, and writer, who many times came up with projects — some resulting in his arrest — that would help propel WRL's militantly pacifist message to the wider public.

For those who don't know, David was on the WRL staff for almost 40 years (1960-1999), a long time member of the Socialist Party, who ran for Congress in 1968, President of the United States on the SPUSA ticket in 1980 and 2000 — the first (I think) openly gay candidate for President — and for the U.S. Senate from New York in 2004 on the Green Party ticket. An internationalist and former chair of the War Resisters' International, he traveled extensively, many times to war-torn countries, once getting arrested in Red Square during an anti-nuclear protest in 1978.

Born in 1929 in Los Angeles, he moved to the East Village in 1956 and began working for Liberation magazine, before joining the WRL staff. An avid photographer, a collection of his photos can be found at http://www.mcreynoldsphotos.org/. All his life he adored animals, most especially cats (sadly, Shaman, his cat — seen in the photo — died shortly after David was  taken to the hospital), was a dedicated member of the Bromeliad Society and many other groups that I don't have time to research before this quick post.

David's family and friends will be planning a memorial service in the weeks to come. As we reflect on David's legacy, WRL is preparing to mark 95 years of resisting war this October 11th. To place a message of remembrance for David in WRL's 95th Anniversary program journal click here, or if you would like to make a gift to WRL in David's memory you can do so here.

There have been many articles written about David's passing, including these:

Unclassified: a short film made for David's 80th birthday

The Villager: David McReynolds, pacifist and socialist leader, is dead at 88 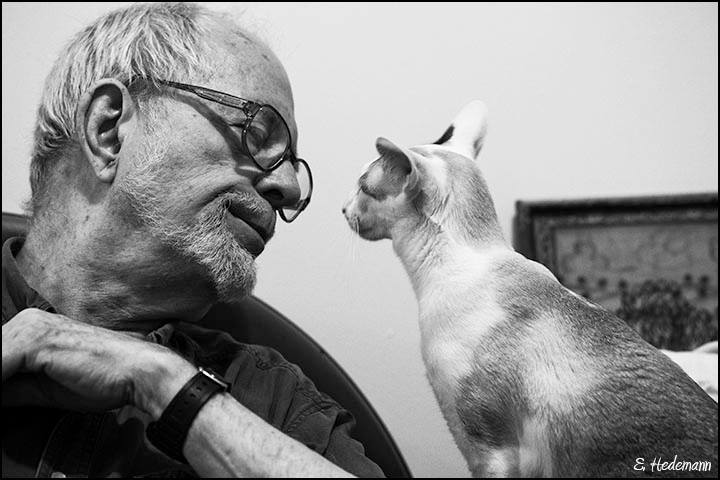