On Friday, October 25th, more than 100 police and military agencies from California and across the US were joined by their counterparts from Israel, Guam, Bahrain, and Brazil for a massive SWAT team training and weapons expo called Urban Shield. The Facing Urban Shield Action Network, with more than 30 endorsers in the Bay Area, showed up to challenge this convergence and the militarization of police.

A press conference on Friday included family members of people who have been killed by police, including Dionne Smith-Downs, the mother of James Rivera Jr., who was 16-years-old when he was killed by police in Stockton, CA in 2010 with an assault rifle. Smith-Downs said, “They used an AR-15 assault rifle to kill my son. That's a military weapon right there. And that has got to stop." Rivera’s father, Carey Downs, added, “They shot at my son 38 times, 18 into his body. They are using military weapons on our kids in our community—we need to take a lot more action. We are not just fighting for our son but for all of our kids.” 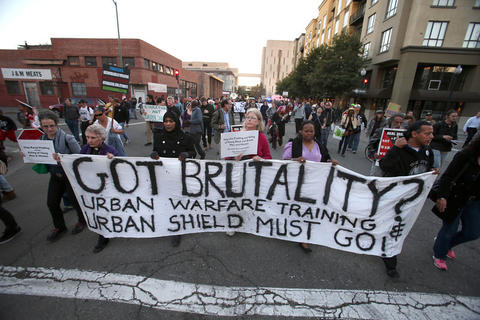 While in Oakland, WRL's Facing Tear Gas campaign organizers confronted our campaign target, Safariland, whose subsidiary - Defense Technology - has shipped tear gas and other "crowd control" weapons to the governments of Israel, Turkey, Canada, Bahrain, and Mexico, as well as to police forces around the US. Safariland tear gas was used to violently disperse activists at the Occupy Oakland encampment two years ago.

Dispatches from the Underclass