“As you know, the establishment of social justice in our nation is of profound concern to me. This great struggle is in the interest of all Americans and I shall not be turned from it. Yet no sane person can afford to work for social justice within the nation unless he simultaneously resists war and clearly declares himself for non-violence in international relations.” 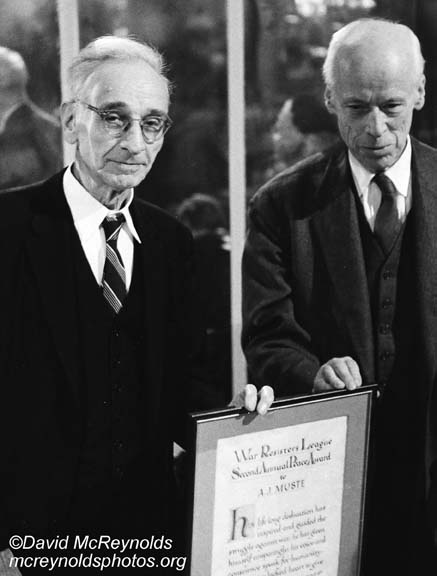 Martin Luther King Jr. gave the keynote speech at the WRL’s Annual Dinner in February 1959. His presence, at least in part, was inspired by the fact that pacifist leader A.J. Muste was being honored with WRL’s Peace Award.

About 10 years earlier, as a student at Crozer Theological Seminary in Pennsylvania, King heard a lecture on nonviolence by A.J. Muste, who was then Executive Secretary of the Fellowship of Reconciliation (FOR) and also on the Executive Committee of War Resisters League. Muste’s lecture, and talks by others describing Gandhi’s campaigns in India, set the young student on a path of reading and research into nonviolence.

By the time Martin Luther King Jr became pastor of a church in Montgomery, Alabama, in 1954, he was convinced that nonviolent resistance could be a powerful force for change. Within a year King was thrown into the Montgomery Bus Boycott campaign — a dramatic opportunity to test the power of nonviolence.

Staff and members of War Resisters League and other pacifist organizations were thrilled by the growing and visible nonviolent civil rights campaign. WRL lent support with publicity, lectures, finances, volunteers as needed, and perhaps most importantly, by sending Executive Secretary Bayard Rustin to Montgomery to offer advice or whatever help was needed. King recognized in Rustin a skilled and strategic organizer, and Rustin’s profound commitment to pacifism and Gandhian nonviolence deepened King’s own understanding. In fact, the day after his speech at the WRL dinner, King, with his wife Coretta Scott King (long committed to nonviolent activism herself), was heading to India for a month “as a pilgrim” to learn more about Gandhian principles. 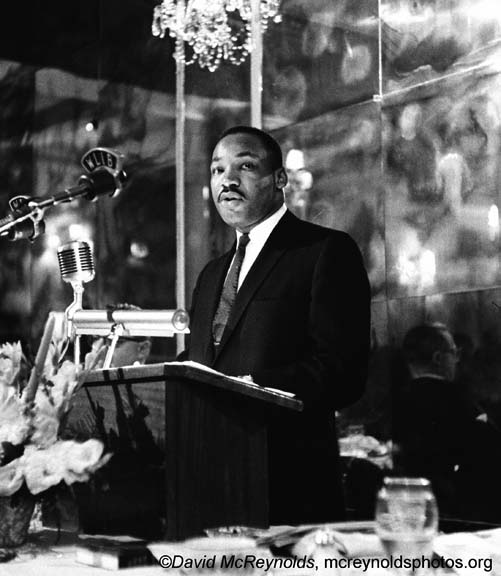 King came to the WRL dinner aware of the organization’s history, the wider pacifist movement, and the individuals who had resisted World Wars I and II, who “chose to be ostracized rather than engage in the brutalization of their fellow man.” There was mutual admiration in the room and mutual dedication to the interconnected struggles for justice and peace.

However, lest we get carried away with taking too much credit for influencing historic struggles:

“Sure we’ve been influenced by outsiders, outsiders like Thoreau and Gandhi. But our biggest influence has been inside—all those years of second-class citizenship stored up inside us.”

— “Florida student” quoted in WRL’s 1961 Peace Calendar, which was dedicated to “the Southern students who in the spring of 1960 participated in the heroic sit-in movement”