Jerica Arents teaches in the Peace, Justice, and Conflict Studies program at DePaul University in Chicago, IL. Her ongoing interests center on racism and its connection to state violence, both here in the U.S. and abroad. She has worked in solidarity with the Afghan Peace Volunteers in Kabul, as well as survivors of torture in Chicago. Jerica also serves as an organizer with Witness Against Torture, a campaign to close the prison at Guantánamo and end U.S.-sponsored torture worldwide. She facilitates anti-oppression workshops and nonviolent direct action trainings.

J. Wade Hannon, a Citizen of the Cherokee Nation, was born in Parsons, Kansas. He grew up in Edna, Kansas in a working class, mixed-blood family (Cherokee, Irish, Dutch, German and English).

Wade has been a counselor, tenured college professor, union organizer, adult educator, mediator, poet and painter. He has published a book of poetry and written many articles, book chapters, and academic papers.

He has been involved in a variety of community, professional, political and labor organizations and has held a wide variety of offices. He was the Co-Founder & Spokesperson of the Red River Anti-War Coalition in Fargo, ND. As a member of the Chicago WRL he was the representative to the group that carried out the protest against NATO & G8.

At the age of 15 he became a pacifist. He has been committed to nonviolence since then. His goals in life are to help usher in a rational, peaceful and egalitarian world were all beings are valued and respected.  Wade is currently an artist and poet who lives and works in Tahlequah, OK.

“I believe that I can bring a unique perspective to the NC and look forward to being a part of this worthwhile and needed organization.

As a refugee of the Gulf War, I am pleased to apply as a frontline board member for the War Resisters League. I respect and admire WRL’s intersectionality and its stance against all forms of oppression. As a board member, I hope to bring my talent as an organizer and strategist to assist WRL is its goals. Having directed various groups, I have learned how to lay out and execute organizational goals. Examples of these goals include setting a record number of programming hours for a radio station, hosting biannual community block parties, and doubling the design team at an arts collective.

I helped achieve these goals by organizing my colleagues around specific goals and setting out steps necessary to achieve them. I’ve continued this work as a project manager for the City of Detroit, rehabilitating the entire city’s fuel stations. I have also helped national and regional business outline their goals as a research strategist at a local design studio and as a consultant to social organizations as a Challenge Detroit fellow. What unifies all this experience is taking a holistic and practical approach and a healthy dose of compassion. After all, it is only though unity and empathy that we can form coalitions to achieve massive change. Now, I am most excited to apply my talents to WRL. I am a member of a National Lawyers Guild, and served on the Loyola-Chicago chapter’s board while in law school. Furthermore, I am a member of the Iraqi Transnational Collective, where we recently raised hundreds of dollars to support The Organization of Women’s Freedom in Iraq.

My relationship with War Resisters League is currently four years old I and have contributed time to a myriad of tasks including archiving, helping organize and promote the campaign against police militarization and planning our upcoming Peace Award. I enthusiastically work with WRL because the violence of war destroys everything. I've seen this in Sri Lanka, my family's home, where the climate of militarization suppressed progressive politics. I began to observe the militarization of society in the US as a young, brown teen growing up in post 9/11 New York. I this is why I find myself drawn to antiwar work in all possible political spaces. For instance, I am also a member of the South Asia Solidarity Initiative, where I document the resistance to militarization in Sri Lanka as well as the rise of rightwing movements across South Asia.

Drawing from experience I've come to see militarization as a global phenomenon that must be resisted with international solidarity. This draws me to the frontline communities subgroup of the NC. There I hope to use my prior experience with War Resisters League to help newer members find their home here in addition to cultivating my own senses of belonging and responsibility.

Noura Khouri is Palestinian-diaspora, and has worked for the past two decades as a human rights activist, campaign strategist and community organizer. She lived in occupied Palestine and Egypt for years, witnessing the impacts on the communities of the largest recipients of US military 'aid' first hand, and is currently based the Bay Area. She is interested in working to more broadly connect issues of war, occupation and militarism abroad, with economic injustice, mass incarceration, racism/Islamophobia and police violence domestically. To these ends, she has been working in the Bay Area, to represent WRL's national campaign. She would like to continue her work with the WRL on the national committee, to help ensure the UASI campaign's growth and success in the Bay Area.

My name is Ramah Kudaimi and I am the Director of Grassroots Organizing at the US Campaign to End the Israeli Occupation, where I work on BDS campaign in support of Palestinian rights. I serve on the board of the Washington Peace Center and am a member of the Muslim American Women's Policy Forum. I have been active with other community organizing and antiwar groups including the Arab American Action Network and CODEPINK: Women for Peace. I have also worked on projects to fight back against Islamophobia, especially related to highlighting anti-Muslim state policies and how they both feed off and further Islamophobia. I am interested in becoming involved with the War Resisters League to strengthen my commitment to resist war but also make the necessary links between racism and militarism at home with our destructive wars abroad. My family is from Syria and my work related to the revolution, including helping found the Syrian Solidarity Collective, has also made me realize how important it is for antiwar movements to be clearly and principally against all oppressive regimes and structures and the essential need to follow the leadership of impacted communities in order to truly achieve collective liberation.

Camilo Mejía has been active in the U.S. social justice and antiwar movements for many years. Born in Managua in 1975 to Sandinista parents, Camilo grew up in Nicaragua, Costa Rica, and the United States, where he joined the military at age 19.

In 2003 Camilo was deployed to Iraq, where he served as an infantry squad leader and participated in and witnessed events that violated international law. This led him to publicly refuse to return to his unit in Iraq after a two week furlough in the U.S. In May of 2003 he was found guilty of desertion and sentenced to 12 months of incarceration at Fort Sill, Oklahoma. Amnesty International adopted him as a prisoner of conscience and launched an international campaign for his release.

Upon his release from prison, in February of 2005, Camilo became an active member of Veterans for Peace and Iraq Veterans Against the War. In 2007 his Iraq war memoir, Road From ar Ramadi: The Private Rebellion of Staff Sergeant Camilo Mejía, was published by The New Press.  Camilo has been involved in a wide variety of social justice campaigns and movements, including antiwar and immigrant rights movements.  He writes Op-Eds and political analysis articles about Veterans Affairs, Moral Injury and PTSD, U.S. intervention in Latin America, and other issues. He resides in Miami, Florida with his teenage daughter Samantha.

However, the WRL "pledge" is as necessary as ever.  Our 93-year history is rich with pacifist actions and it is important that we continue them.  I have tied my local work to related campaigns as I have also been part of the Courage to Resist Organizing Collective for many years and the Chelsea Manning Support Network since 2010. As a member of the Berkeley Peace and Justice Commission, I have brought our issues to the Berkeley City Council. Berkeley has celebrated International Conscientious Objectors' Day as Berkeley CO and War Resisters' Day every May 15th since 2007, when I was successful in having the day designated such by the City Council. I have brought issues of torture, weapons, drones, and militarized police to the Commission and to the Council.

In the past, I have organized War Resisters League/Southern California and Southern California War Tax Resistance. I have co-facilitated the activities of WRL-West in recent years. During different periods, I have focused on draft resistance, draft registration resistance, counter-recruitment, and resistance to the many wars of U.S. imperialist aggression as well as anti-nuclear activities and nonviolence trainings.   As a person with disabilities, I still wish to contribute what I can to re-vitalize WRL in the coming period by continuing to serve on the National Committee and making decisions toward nonviolent revolution.

Steve Théberge is a potter from western Massachusetts. Following a degree in Anthropology and years as an activist in New York City, he spent 2008-2013 training in Zen Buddhist monasteries in the United States and Japan. He currently maintains a pottery studio in Northampton, Massachusetts.

From 2004-2009 he worked in the national office of the WRL, serving as Youth & Counter Recruitment National Organizer (2004 - 2007) and as Organizing Coordinator (2007 - 2009).  In his time on staff his work was focused on developing and coordinating a national counter-recruitment program, developing strong relationships with allied organizations and projects, and leading workshops and trainings around the country. He was on staff during a period of organizational transformation and was very involved in the restructuring process that followed.

I see the WRL as my political home - both in the sense that it is where I came of age as an organizer, and that it is the organization that that fully embodies my vision of the world that we want to live in. If elected to the WRL NC, I would look forward to supporting on-the-ground organizing campaigns - specifically the work to end police militarization - and also supporting the health and sustainability of the organization as a whole.

For the past 6 years as a member of the Critical Resistance (CR) Oakland Chapter, I have sharpened my organizing skills as a part of successful campaigns to fight gang injunctions, end solitary confinement in California, and stop the construction of a new jail. Through that work I was more formally introduced to WRL. In 2014 I was the local organizer with the Stop Urban Shield Coalition which successfully pushed the seminars and vendor show out of Oakland. Through that work I learned even more about how militarization had permeated policing under the guise of "public safety". In 2014 I was also a founding member of the Black Lives Matter Bay Area Chapter. I'm now an at-large member of CR based in Atlanta, focusing on infrastructural support and cultivating relationships with organizations in the South doing abolitionist work. I have also joined Southerners on New Ground and the BLM Atlanta chapter (both of which are somewhat intertwined). I'd be excited to join the WRL National Committee not only to support WRL's long standing work to dismantle the roots of the American War Machine, but also to make that work more accessible to the communities I'm committed to serving. 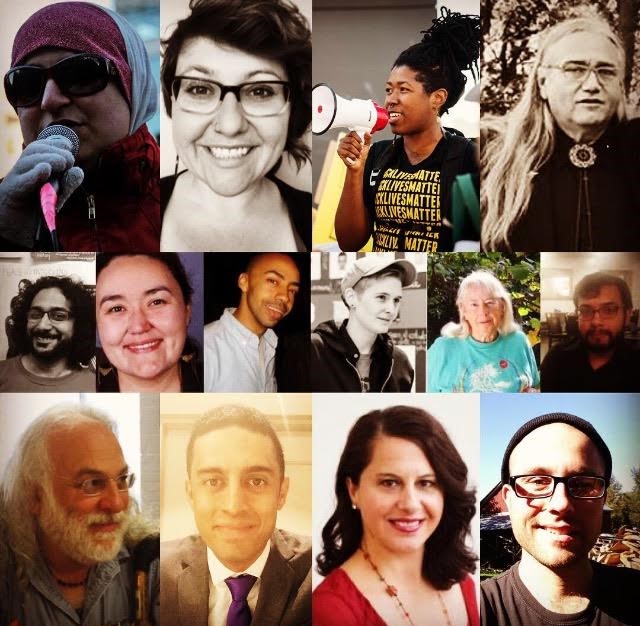