Yesterday North Korea fired a ballistic missile at Hokkaido Island-- the first missile of its kind to fly over Japan amidst rising global tensions. Meanwhile, US and South Korean military exercises continue while Trump renews threats of escalation, fueling an all too costly arms race.

As the international community calls for diplomatic solutions, today we turn to our comrades in the global Korean diaspora and members of Nodutdol for Korean Community Development to share their demands for de-escalation and peace.

Read below to find out how to take action and where to learn more:

"As part of the global Korean diaspora, we as members of Nodutdol for Korean Community Development are committed to peace, reunification and an end to state violence from New York City to the Korean peninsula. All of us are connected to friends or family who were impacted by the Korean War in the early 1950s, and as members of the diaspora we each have our own story to tell about the lasting impacts of war. We hope this moment of crisis creates an opportunity for the progressive movement to shift the discourse and come together with us to demand peace. Characterized as either weak and powerless or an existential threat to the United States, North Korea is in actuality populated with everyday people who suffer from heavy UN sanctions and whose lifelong dream has been for the peaceful reunification of both the Korean Peninsula and of Korean people around the world. We hope this moment of increased attention on North Korea can help us to move toward establishing peace for the entire Korean peninsula that is rooted in the desires of the Korean people, and not in the geopolitical ambitions of the United States." 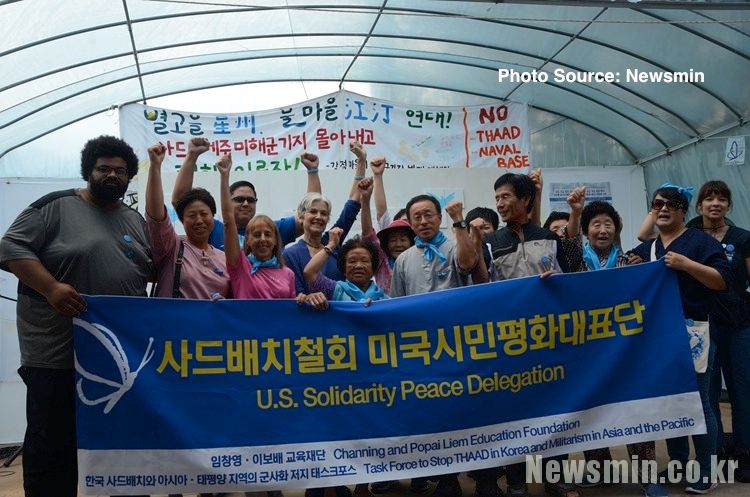 Join Jill Stein, Medea Benjamin, Reece Chenault + Will Griffin to hear a report-back from U.S. Solidarity Peace Delegation about the fight to stop the U.S. THAAD deployment and war threats in Korea. The delegation shared its message of solidarity with a broad spectrum of peace activists in Seoul, as well as villagers of Seongju, Soseongri and Gimcheon who are waging a heroic fight to oppose the US deployment of the THAAD missile defense system. RSVP NOW! 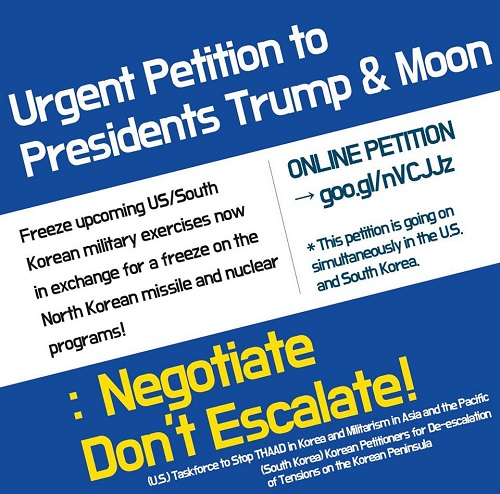 Sign + circulate this joint U.S.-South Korean petition rooted in a fervent desire for a peaceful, just resolution of the extremely dangerous conflict on the Korean peninsula. This petition urges Presidents Trump + Moon to begin diplomatic dialogue with North Korea by freezing the upcoming U.S./South Korean military exercises in exchange for a freeze of North Korea’s nuclear + missile testing, as well as remove the controversial THAAD missile system. SIGN NOW!

Read! Check out Nodutdol's recent statement "Moving Towards Peace" calling for an end to military exercises and war games, a stop to the THAAD missile defense system build up, and an end to the North Korea travel ban.