Nov. 3rd Day-After-Election-Day Anti-war Demonstraton. Information about the planning for the “no matter who’s elected we need to demonstrate against the war” demonstration.

We need to hear from participants. We want names of all who were involved. Tell us whether you were you arrested or acted in support, do you have photos, what articles or news reports did you see (please send them to us), what happened at the demonstration; if you were arrested, how long were you held in jail, did you get an ACD, what's the date your arraignment or trial, etc. Please e-mail us at nycwrl [at] att.net.

Legal. On Oct. 6, NYC Judge Katherine Fried dropped all charges against the 227 people who were arrested near the World Trade Center site on August 31, including those who have already received ACDs. For more information, download Acrobat PDF stories by the New York Times, New York 1, WCBS-TV, or 1010 WINS. Martin Stolar of the National Lawyers Guild had been seeking to represent everyone who was arrested at the WTC. If you were not arrested at the there but would like to be represented by the National Lawyers Guild, please call 212-679-6018 x16 or go to the RNC Mass Defense Committee.

If you are interested in participating in the class action civil suit, you can contact William Goodman (212-353-9587 or bgoodman [at] gls.net), one of the attorneys working on the case.

To detail police misconduct, the New York Civil Liberties Union is asking arrestees to fill out the Pier 57 Intake Form. Specifically, please look at Legal Support for RNC Protests page. On that page they have links to police misconduct forms, forms for those detained after 5 pm on Sept. 2, forms for witnesses, etc. On the other hand NYC Mayor Bloomberg is urging demonstrators to get it over with and “plead guilty” (Newsday, Sept. 20, 2004).

Criticisms of Arrest Tactics and Detentions.

The Call to Action. Click here to see the original call to action for the August 31, 2004, procession and nonviolent civil disobedience die-in at Madison Square Garden.

Because there was some confusion as to what happened on August 31, the following is a brief chronology of how the demonstration unfolded:

Names of Those Arrested. The Sept. 8, 2004, VillageVoice has an “Honor Roll: The Guest List at Pier 57” of all those arrested. Though some names are missing and some are misspelled, this is as complete a list as we've seen.

Tactics in Action (according to New York Times, Sept. 2, 2004)
“How the arrests unfolded at the War Resisters League march near the World Trade Center site on Tuesday.”

4:01 p.m.Several hundred marchers set off across Church Street, after being warned by police to march two abreast and to stay out of the street.

4:03 p.m. Police in helmets block the front of the march after they say marchers had blocked the sidewalk and roadway.

4:05 p.m. As the marchers on Fulton Street are surrounded by police, the rest of the protesters remain on the west side of Church Street.

4:10 p.m.About 200 protesters are penned in behind plastic fencing. The ends of the street are sealed off with police scooters and vans.

Listen to a 2-minute New York Times audio clip (mp3) of the arrests at the World Trade Center.

Under Arrest Across from WTC

On Fulton Street, across the street from the World Trade Center site, after 227 protesters are under arrest and surrounded by the police and their orange nets, around 5 pm, August 31, 2004. Photos by Ruth Benn 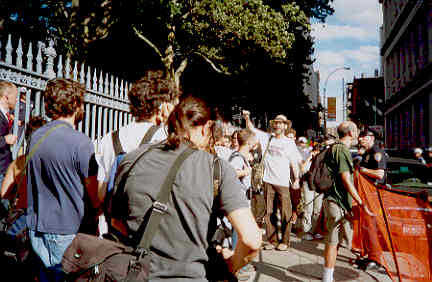 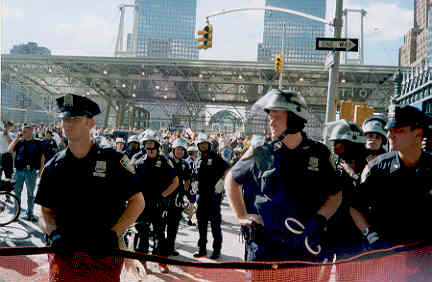 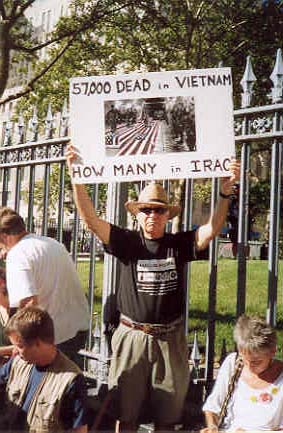 On Broadway at 28th Street, beginning at 7:15 pm.
First two photos by Jonathan at nyc.indymedia.org 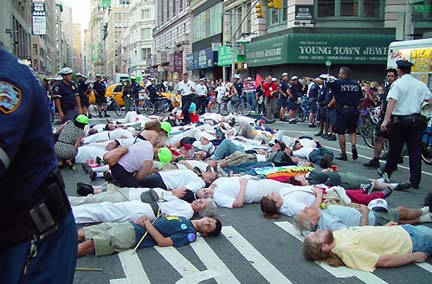 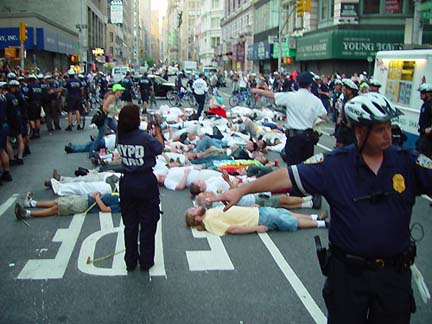 The following Web sites have additional photos from the August 31 civil disobedience: