One hundred years after the birth of human rights icon Bayard Rustin, his complicated legacy pushes us to analyze our own complicated times. Vilified in the 1950s for his open homosexuality and again in the 1960s for “selling out” the radical black liberation movement, Rustin’s own history has been recently rescued by the books and movie correctly extolling his incredible gifts as a grassroots organizer, a charismatic orator and a visionary thinker. As preparations proceed for the 50th anniversary of the 1963 March on Washington for Jobs and Freedom (of which Rustin was the chief architect), and the dreams and nightmares of a new generation are being forged against a backdrop of pepper spray and tear gas, it is time to take a deeper look at the relationship between the movements for peace and for justice — movements which are no more “integrated” now than they were 50 years ago.

It is important first to note that, just as the foundations for much of the 1950s tumult around civil rights were laid by the Tuskegee Airmen and other members of the U.S. Armed Forces of African descent, Rustin was a part of another grouping of World War II veterans. When the black vets who helped liberate Europe from fascism and open the doors of the concentration camps came home to find that democracy and equality was not forthcoming despite their heroic efforts, Rustin and his World War II conscientious objector colleagues had spent their war years behind bars. Many of them, including Rustin, Dave Dellinger, Ralph DiGia, George Houser and Bill Sutherland, were active in efforts to desegregate the federal prisons they were held in, a daring effort 10 years before the widespread lunch counter sit-in and bus boycott campaigns.

It must be understood as no coincidence that this generation, whose skills were honed and tested at a time when mass sentiment was neither anti-war nor particularly progressive, produced activists whose life-long commitments to fundamental social change led them to become long-term advocates for radical alternatives. Many of the most respected and serious leaders of the civil rights, Pan-Africanist, solidarity, anti-Vietnam War, anarchist, socialist and disarmament movements of the following five decades came out of the small cadre of World War II conscientious objectors who put organization before ego and linking struggles before leftist turf wars. These same activists, coming out of the religious as well as the secular pacifist movements, were amongst the first to label their brand of nonviolent action as explicitly revolutionary — and worked to take over and increase the militancy within the existing groups of their time. 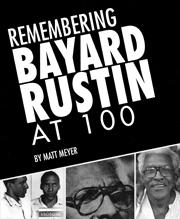 or
Buy the new book
on WRL's onine store

Matt Meyer is an educator-activist, based in New York City. A former public draft registration resister and chair of the War Resisters League, he continues to serve as convener of the War Resisters International Africa Working Group. With Bill Sutherland, Meyer authored Guns and Gandhi in Africa: Pan-African Insights on Nonviolence, Armed Struggle and Liberation. Meyer is author of Time is Tight: Transformative Education in Eritrea, South Africa, and the U.S.A. He has edited the Fellowship of Reconciliation's "Puerto Rico: The Cost of Colonialism;" War in Africa and an African Peace; Seeds of New Hope: African Peace Studies for the 21st Century and the forthcoming We Have Not Been Moved: Resisting Racism and Militarism in 21st Century America.