From November 22nd through December 1st, a delegation of 14 members of Witness Against Torture--WRLs sibiling organization including three members of WRL--returned to Cuba and brought their demand to shutdown Guantanamo Bay straight to the U.S. naval base and detention center. 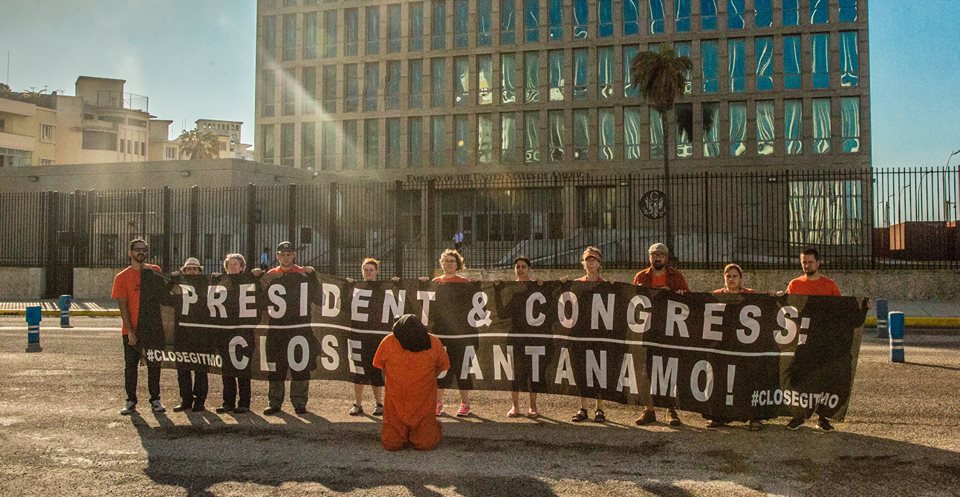 It's hard to believe that just 10 years ago, 25 people walked to the gates of Guantanamo to bear witness to US imperialism as Witness Against Torture's inaugural action.

Mourning the reality of nearly 14 years of torture, indefinite detention, solitary confinement, and reminders of US military occupation worldwide left us somber but clear about our work ahead. Our trip was contextualized in growing Islamophobia exaccerbated and brought to surface after recent global violence and refugee crises.

On our first few days we convened with activists worldwide at the No Bases conference in Guantanamo, Cuba. There, our work to close Guantanamo Bay Prison took on a new meaning that included closing the base in support of Cuban sovereignty.

Sensitive to Cuba's political goals and an ever present self-awareness of our position as American citizens, we leveraged our power to elevate the voices of the detained men in Guantanamo without perpetuating American exceptionialism.

Thanksgiving Fast
From the conference, we moved to El Mirador in Guantanamo, 3 km from the prison and began a five day encampment. As lights from the prison flickered across the bay, we fasted in solidarity with our brothers inside, many of who have been hunger striking for years. 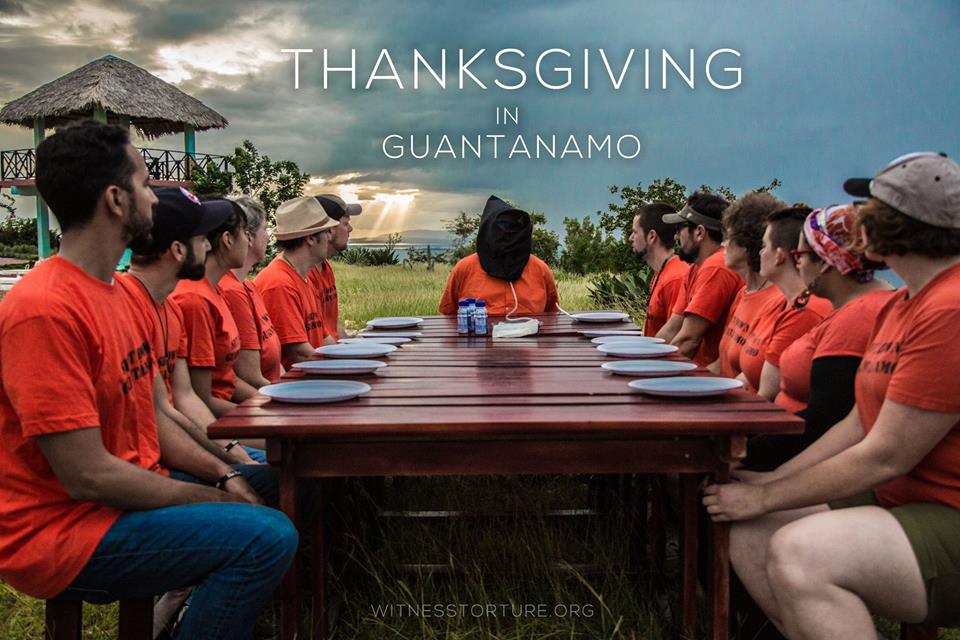 Our Thanksgiving Day fast was a solemn expression of our compassion for the men currently held at Guantanamo. Seated at a table, we sat with empty plates facing a detainee at the head of the table, symbolizing the leadership we take from the detainees and our waiting for their return home.

On our final day overlooking the Bay, a scenic view and allegory for possibility, Witness Against Torture held a closing ritual. Starkly describing the fate of the detainees as "Homecoming or Death,” we read the names and stories of all 107 detainees, lighting a candle to symbolize their inner fire and courage, and placed a picture of them on the wall of our alter. 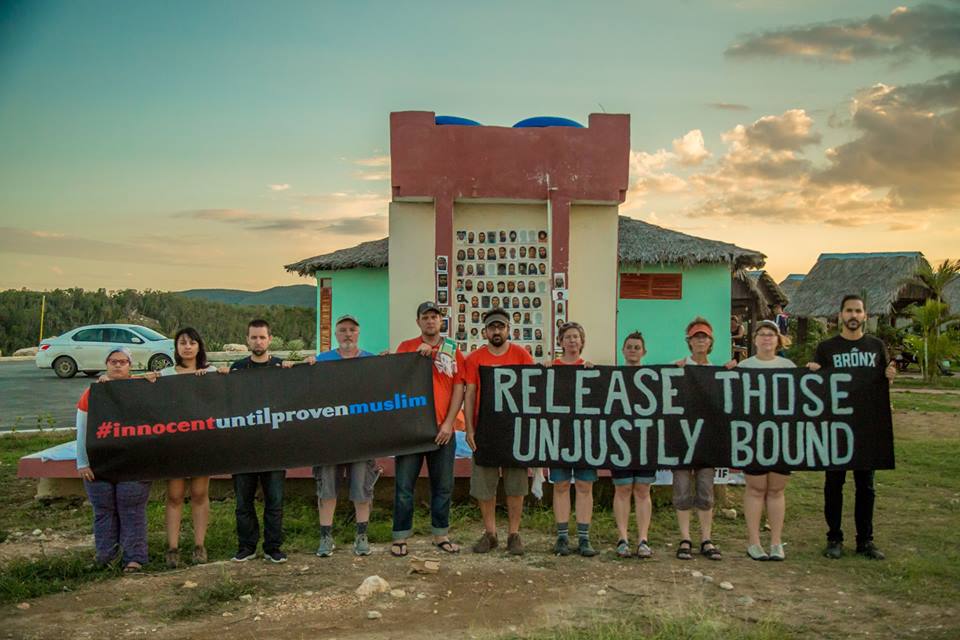 death both literal and spiritual, our hopes lay in the possibility of bringing the detained men home.  Our ritual continued as we brought each picture to a station representing home, composed of prayer rugs, colorful cloths, a banner with the face of a now-free Shaker Aamer, and mementos of we had brought, like pictures of our families.  Dreaming of a day when they will be with their families, friends, and loved ones, we sang "Courage Muslim Brother."

WAT at U.S. Embassy In Havana
Our Embassy action was the culmination of Witness Against Torture's "Sojourn to Justice" in Cuba. On Monday, we held a demonstration at the recently opened US Embassy in Havana, Cuba. Outside the embassy, we unfurled a giant banner reading "President and Congress: Close Guantanamo!" as well as a portrait of Tariq Ba Odah, who has been hunger striking at the prison since 2007. Our demonstration was the first protest of Guantanamo prison at the US embassy in Cuba and among the first protests by Americans at the embassy altogether.

The men in Guantanamo will hear of what we have done at the gates of the base. We pray that it will give them strength just as their courage gives us strength. The words of recently released detainee, Shaker Aamer, were imparted to us we left for Cuba. Shaker writes:

I give thanks to my lord and then to all the good people all over the world who've worked so hard over the years for my release and to support justice. I'm grateful to Witness Against Torture for travelling so far and carrying a message of hope to my brothers in Cuba. I want my brothers to understand that everyone is working hard for their release and ask them to work together to help each other so that others can help them. No one in the world should accept what's happening in this prison. Guantanamo has been built for one reason and that is to destroy human beings, mentally, physically and spiritually. I truly thank Witness Against Torture, Save Shaker and We Stand With Shaker for telling the whole world about the suffering of my brothers still there. Thank you to all and every one and every group and establishment who stands for justice. May Our Lord Allah, guide us all.
-Ex-hostage 239, Shaker Aamer

What's Next
WRL and Witness Against Torture’s work continues as we turn our organizing efforts towards January when we will gather for our annual Fast for Justice from January 3rd - 13th and bring our collective power to the streets of Washington D.C. 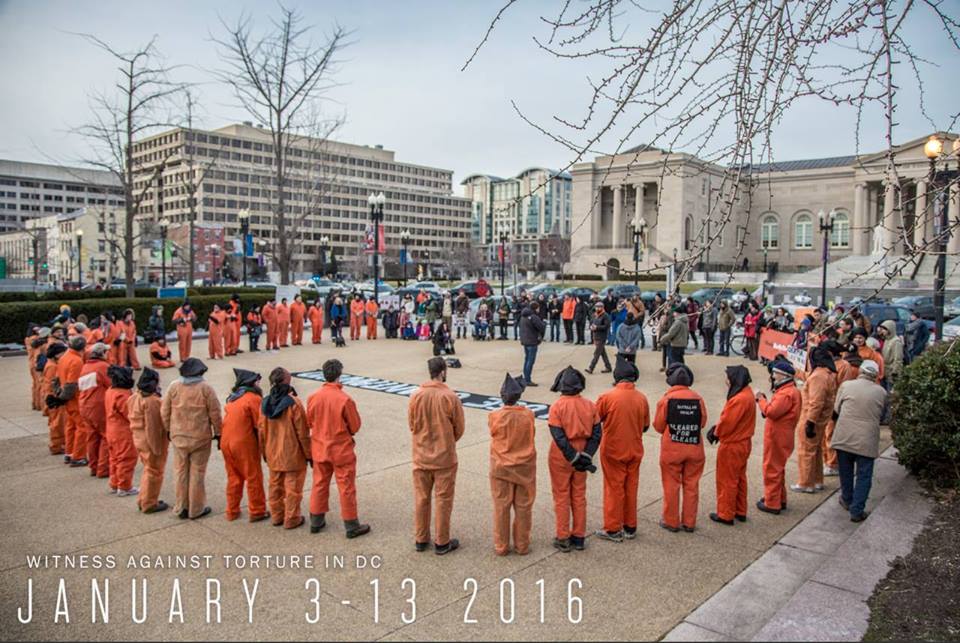 We are energized by the response to our work. We are committed to the work for the freedom for all people trapped in a cage.
​
On her second trip to Cuba with Witness, WRL National Committee member, Frida Berrigan writes,

As we move forward, we hope to share our answer with all of you.