Since 2013, we've been resisting Urban Shield, the largest SWAT training in the the world. Today, more and more people have come to see this "preparedness exercise" for what it really is: a racist carnival of repression that has no place in the future we deserve.

That’s why, after four year of constant organizing from the Stop Urban Shield coalition, we need national action across Urban Shield more than ever.

What is Urban Shield//

Urban Shield is a national war games, SWAT training and weapons expo, held each year in Alameda County, with exercises all over the Bay Area, and attended by hundreds of local, federal and international agencies.

Its goal is to collaborate on, expand and profit from new forms of surveillance, state repression, and state violence and is hosted with support from and on condition of a grant from the Department of Homeland Security’s Urban Areas Security Initiative.

It brings together police departments and  SWAT teams, fire departments, emergency medical services and weapons manufacturers for training exercises and thus consolidates notions of public safety and security under the discursive logics of and material structures and systems of increased militarization.

What they say it is//

Urban Shield is sold as a “public safety” and  emergency preparedness exercise to be better prepared for natural disasters. It’s defines its geographic cartography and consequentially demographic target as a “high-threat, high-density urban area.” Though, it markets itself as a pillar to increasing secure communities, everything in Urban Shield has to have a nexus to terrorist threats and thus domesticates “counter-terrorism” training, policies and tactics. This, consequentially is a part of a project that builds militarized policing tactics and mentalities of local policing forces and other agencies locally and transnationally. 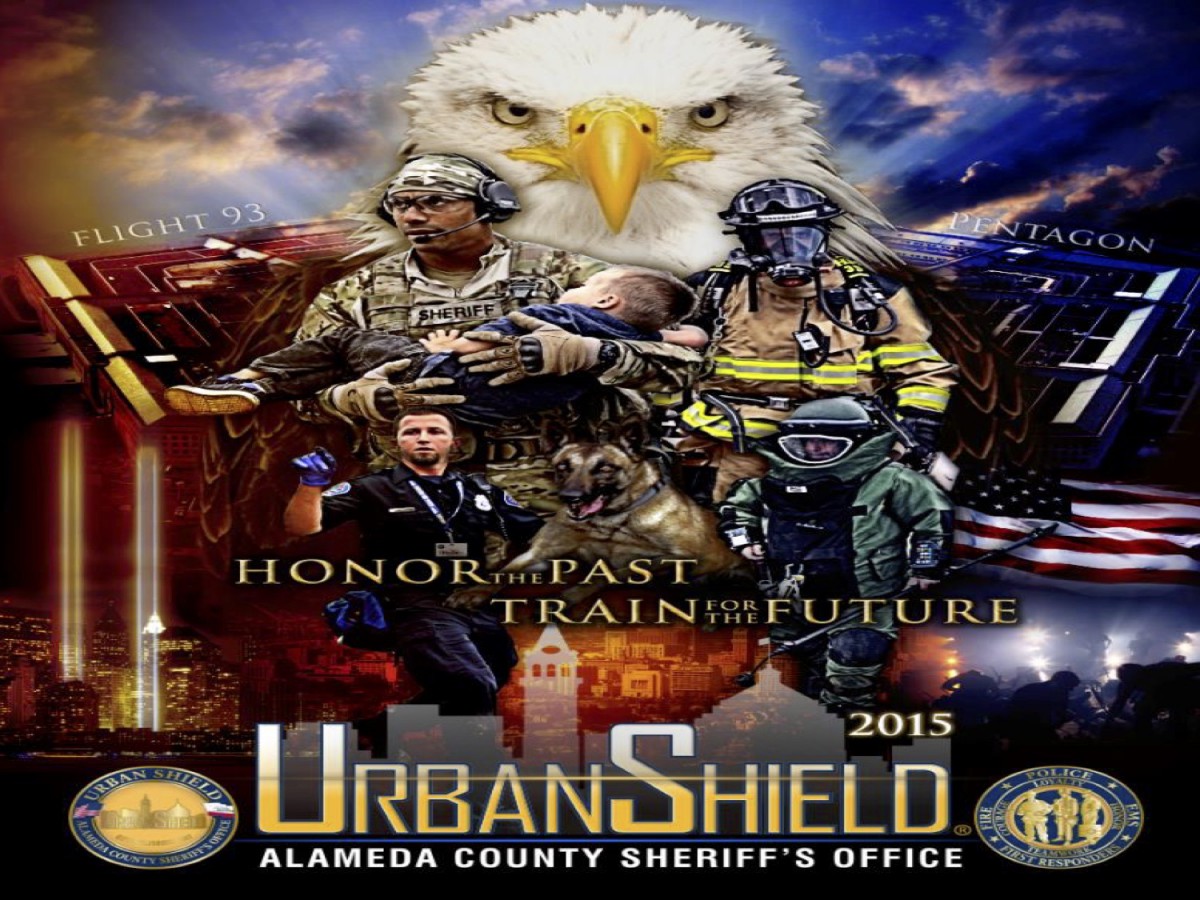 What is the Urban Areas Security Initiative (UASI)?//

UASI self-defines as a “Program (that) assists high-threat, high-density Urban Areas in efforts to build and sustain the capabilities necessary to prevent, protect against, mitigate, respond to, and recover from acts of terrorism." For the Fiscal Year ending in June of 2014, UASI gave $587,000,000 in grant funding to varying agencies. Alameda County has received $6,358,300 in funding from UASI for the period of November 1, 2014-February, 28 2016. Of this sum of money, 1.7 million dollars must be committed to Urban Shield.

As part of the increased police/military state, Urban Shield is part and parcel of a project of racialized, gendered, sexualized and classed warfare and repression. Funded by the Department of Homeland Security and FEMA and coordinated by the Alameda County Sheriff’s Office, war weapon manufacturers profit from sales of new forms of surveillance and state violence bought by international police departments and emergency service providers. On average, Urban Shield costs $2 million and those who profit are in the business of war making, crowd control and containment of racialized and/or colonial subjects.  The Alameda County Sheriff’s Office does not receive any funds from Urban Shield to offset the costs of holding such activities in the Bay Area County thus causing the county to pay using the hard earned money of its people. Urban Shield states that it “has no funds available to offset the costs of overtime for employees who may wish to participate in the exercise planning or on the dates of the exercise itself.  Nor does Urban Shield have funds available to offset the costs of backfilling on-duty employees who wish to participate." However, the county accepts these conditions of costing the people in order to secure funding through UASI.

On local levels Black and Brown communities are the populations that constituent the highest populations in “urban areas,” and thus become the greatest targeted and impacted communities by Urban Shield. Communities of color, Native peoples, and poor people, particularly homeless people, are most impacted by police militarization including extra-judicial killings, police brutality, racial profiling, suspicious activity reporting policies, Fusion Centers and the rapidly expanding prison industrial complex. A gendered analysis that accounts for sexual and gendered violence’s of policing tactics, techniques and policies also centers women of color and LGBTQ communities as vulnerable populations to the impact of Urban Shield. And, the particularly expanding antagonisms between young people of color and the police positions youth as a target population to the increased militarization of police.  Do you remember seeing tanks and grenades in Ferguson and Baltimore? It is expos like this, funded by the Department of Homeland Security’s “Urban Areas Security Initiative” grant that allows urban warfare to happen. On global levels International police departments, counter-terrorism units, and border patrol agencies come to Urban Shield, trading tactics of state repression, crowd-control and weapons technology. In the past, agencies from the apartheid state of Israel, Bahrain, Singapore, Brazil, Jordan, Qatar and Canada participated in Urban Shield. This kind of collaboration impacts every policed person around the world whether under formal colonial occupations or under neo-imperialist regimes.

Who is the Stop Urban Shield Coalition//

Stop Urban Shield is a broad coalition of grassroots community and social justice organizations primarily based in the Bay Area but with partnering community groups across the nation who have come together united against Urban Shield. The coalition includes members from various race, faith, political and social backgrounds and successfully stopped the Urban Shield expo from being hosted in Oakland in 2014.  Our goal is to end Urban Shield and hold accountable our cities and counties from their corroboration in increased racialized repression and violence.

What the Stop Urban Shield Coalition Stands for//

How to Join Us in the Fight to Stop Urban Shield//

In 2014, The Stop Urban Shield Coalition shut down Urban Shield. On the first day of the expo, Mayor Jean Quan announced Urban Shield would no longer be held in Oakland city borders! To do this, we did a lot: teach-ins, protests, press conferences and more. We are doing it again.