Individuals, companies and corporations have always taken advantage of warfare to make enormous economic profit. For centuries, ordinary people, who suffer most from war, have resisted these war profiteers. One of the major factors in Harry S. Truman's rise to the U.S. presidency was his relentless ("Give 'em Hell, Harry!") pursuit of war profiteers.

Stop the Merchants of Death [SMoD]

War Resisters League initiated our "Stop the Merchants of Death" [SMoD] program with a September 2006 conference which gathered more than 60 activists representing 37 grassroots organizations from throughout the country. The Conference culminated in a celebration of Gandhi’s birthday as 78 people were arrested trying to deliver a subpoena to Daniel J. Murphy, CEO of Alliant Tech Systems – makers of cluster bombs and munitions releasing depleted uranium.

Stop the Merchants of Death [SMoD] worked to uncover the many ways these corporations are literally calling the shots when it comes to deciding what weapons systems to buy, what countries to invade, what foreign resources to seize. At the War Resisters League we say, "It's not so much true anymore to say that they make profit from war. They have such power that it's more accurate to say they now make war for profit."

SMoD grew into the Bite the Bullet War Profiteering Education and Action Network. 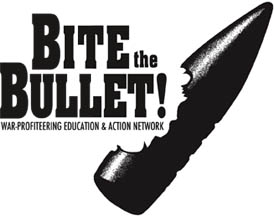 Initiated by the War Resisters League, Women's International League for Peace and Freedom, the Fellowship of Reconciliation and other groups, Bite the Bullet: War Profiteering Education & Action Network worked to motivate and empower a broad-based movement to educate, agitate and organize against the military industrial complex through creative, nonviolent and democratic means.

While the Bite the Bullet Network shut down in the late 2000s, the groups that built it continue to work against war and militarism.

Corporations manufacture weapons for profit. Private contractors provide the military with infrastructure and logistics support. Universities conduct military-related research. These are but a few examples of the beneficiaries of our "permanent war economy."

Today many Americans are asking how our country ended up in such a monumental mess in Iraq. The old saying still holds true: follow the money.

Corporations contribute millions of dollars to political campaigns with the hope that their investments will yield profitable returns in the form of military contracts - and they do. Lockheed, General Dynamics and other weapons-makers derive most of their income from military-related production, while Halliburton and Blackwater receive billions to support military operations around the world. Meanwhile, for Chevron, Exxon-Mobil and other corporations, war has meant record profits and an opportunity to take control of Iraqs oil as they continue to capitalize on the US's addiction that also fuels the climate crisis.

It's time to bite the bullet and stand up to the war profiteers that are undermining our democracy, bankrupting our economy, ruining our environment, and destroying thousands of lives.