The current edition of the War Resisters League's famous "pie chart" flyer, Where Your Income Tax Money Really Goes, analyzes the Federal Fiscal Year 2017 Budget.
(FY 2017 is 1 October 2016 - 30 September 2017).  Perfect for Tax Day leafletting, as a focus for forums and panels and workshops and more!

Each year, War Resisters League analyzes federal funds outlays as presented in detailed tables in "Analytical Perspectives" of the Budget of the United States Government. Our analysis is based on federal funds, which do not include trust funds -- such as Social Security -- that are raised separately from income taxes for specific purposes. What you pay (or don't pay) by April 18, 2016 goes to the federal funds portion of the budget.

How Were the FY2017 Pie Chart Figures Determined? 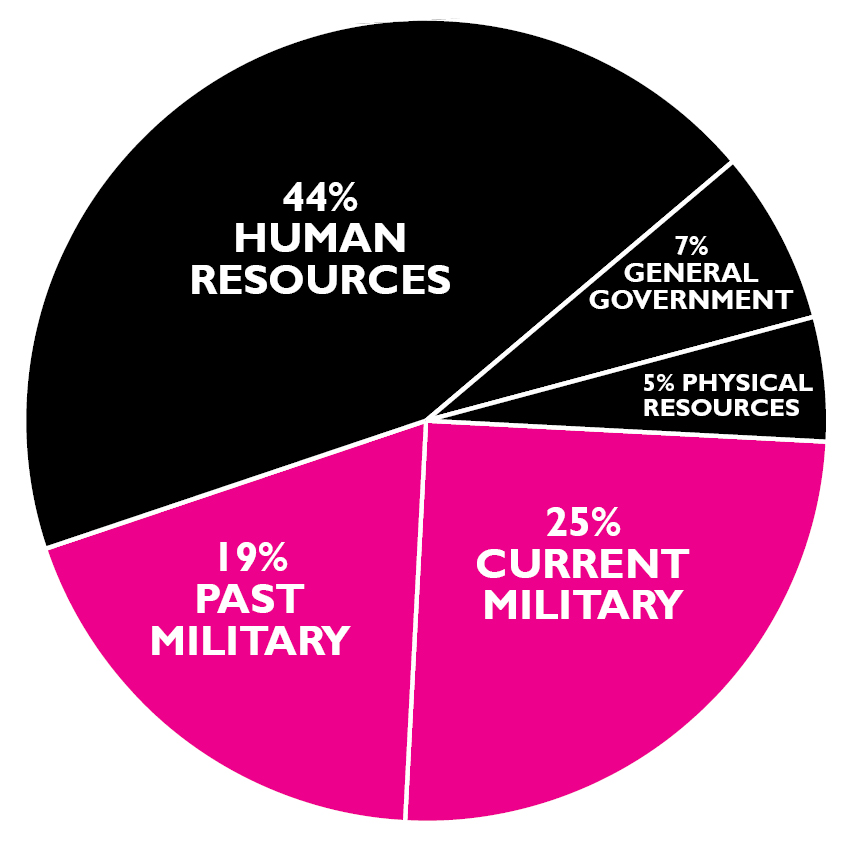 “Current military” includes Dept. of Defense ($586 billion) and the military portion ($182 billion) from other departments as noted in current military box above. “Past military” represents veterans’ benefits plus 80% of the interest on the debt.* For further explanation, please go to warresisters.org.
These figures are from an analysis of detailed tables in the Analytical Perspectives book of the Budget of the United States Government, Fiscal Year 2017. The figures are Federal funds, which do not include Trust funds — such as Social Security — that are raised and spent separately from income taxes.
What you pay (or don’t pay) by April 18, 2016, goes to the Federal funds portion of the budget. The government practice of combining Trust and Federal funds began during the Vietnam War, thus making the human needs portion of the budget seem larger and the military portion smaller.

*Analysts differ on how much of the debt stems from the military; other groups estimate 50% to 60%. We use 80% because we believe if there had been no military spending most (if not all) of the national debt would have been eliminated.

Presidential campaigns magnify the cries for more military spending. Candidates ignore the facts and declare “the military has been gutted.” They one-up each other on who will be the strongest commander in chief. The graph shows military spending at its highest levels since World War II despite recent declines.  Look at what trillions of dollars and endless war have bought, then pledge  to take at least one action below. 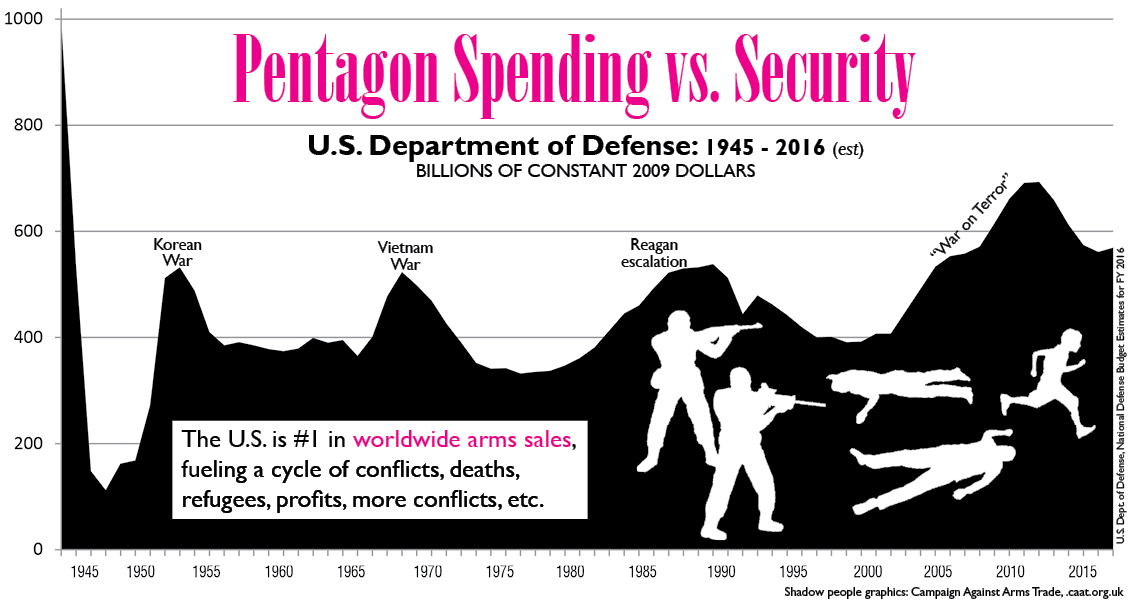 • Steady growth in terrorism over the last decade, with the highest number of deaths in countries the U.S. was “helping” — Iraq, Afghanistan, and Pakistan
• 50 million refugees or internally displaced people due to conflict and violence — the most since World War II
• 100 million barrels of oil per year burned by U.S. military equipment,  releasing millions of tons of pollutants
• Major human rights violations, including detention without trial, torture, expanded U.S. government surveillance, and racial profiling.
Sources: Costs of War Project: , watson.brown.edu/costsofwar; “The Military Assault on Global Climate” by Patricia Hynes

“The biggest contribution the United States can make to combating terrorism worldwide is to abandon the war paradigm and extricate itself from the wars that have served as such an effective recruiting device for new terrorists.”

TAKE ACTION: What You Can Do

Leaflet with this flyer year-round and on Tax Day, April 18, 2016, which is also the Global Day of Action on Military Spending.

Write elected officials and local media. Send them copies of this flyer. Demand an investment in peace, not war.

Protest with your money! Sign up at wartax boycott.org. Refuse to pay all or part of your federal income tax. Whatever you choose to refuse—$1, $10, or a percentage—send a letter to elected officials and tell them why. Though illegal, thousands of people openly participate in this form of protest. Contact us for information or referral to a counselor near you. Contribute resisted tax money to organizations that support the common good.

Read and use War Tax Resistance: A Guide to Withholding Your Support from the Military, 144-page handbook with history, methods and resources. $6 postpaid at warresisters.org/store.

For Pie Charts from previous years, check out the Pie Chart Archives

If you have questions about ordering, email us at wrl [at] warresisters.org
Please call for information on very large or rush orders.

The War Resisters League spends a lot of time, energy and money to create this resource. Please credit when using. For permissions to reprint, email us at wrl [at] warresisters.org