by Terry Rockefeller and Valerie Lucznikowska

Please, spread the message: there is not only violence in Iraq, there is something more; people are building peace and seeking real change. .. Today La'Onf exists within the polarized and dangerous political environment of Iraq where if you speak about resistance you are accused of supporting terrorists and advocating violence; but if you speak about nonviolence you are accused of supporting the occupation. La'Onf seeks to create a third way with its message that nonviolence is a tool to resist occupation, terrorism, and corruption.

Today in Iraq, there is a growing movement of citizens pursuing an end to violence, occupation, and corruption through nonviolent means. La'Onf ("No Violence" in Arabic) is a coalition of organizations and individuals who have joined together to promote nonviolence as the most effective way to struggle for a free, democratic, and peaceful Iraq.

La'Onf had its start in 2005 when a group of activists in Baghdad posed the question: "Can nonviolence be a tool for change in the midst of occupation, violence and suffering?" In response, they established La'Onf and organized trainings in nonviolence in 2006. By 2007, they were receiving so many requests for training that they started to train trainers who went on to teach nonviolence to groups all over Iraq.

In the two years since La'Onf was founded, the group has grown from a handful of visionaries to a network of more than 100 Iraqi organizations in all of Iraq's 18 governorates (provinces). Members include a diversity of men, women, and youth from Iraq's many ethnic and religious groups. They are united by their commitment to nonviolence and reconciliation as the best path for building a peaceful Iraq free from foreign occupation.

Among the La'Onf leadership are many inspiring activists. Azam* is a member of the La'Onf coordinating committee in Tikrit, Salah ad Din province. When Azam lost his job as a major in Saddam Hussein's army following the U.S. invasion, he began studying law rather than join a militia. Today Azam works to spread the culture of nonviolence and cooperation, especially among Iraqi police and army members.

Thawar*, who is the La'Onf coordinator in Najaf, is a committed defender of women's rights. A high school teacher, she speaks of the connections between how a society treats its children and the kinds of violence that society experiences.

Ayad* from Ninawa Province was part of the International Day of the Missing demonstration in Baghdad, demanding investigation into the more than 250,000 cases of Iraqis who have gone missing since 1980, including Ayad's brother, a human rights lawyer.

This year on October 11-16, La'Onf members held their third annual Week of Nonviolence, in which locally organized activities took place in all 18 provinces. The theme of this year's actions was making the upcoming provincial elections safe, free, and truly democratic. La'Onf''s distinctive blue poster depicting the white dove of peace in flight with a ballot box gripped in its claws was plastered on highway light poles, fences, buildings, and even military checkpoints. La'Onf handed out the posters, along with literature describing the teachings of Mahatma Gandhi and Martin Luther King Jr. to soldiers, shoppers, schoolchildren, police, politicians, youth, and women's groups during an intensive week of activities.

At seminars and public meetings, Iraqis from all areas of society gathered to discuss nonviolence as an essential path to political, social, and economic change. La'Onf members organized poetry readings, art exhibitions, television programs and films, dance performances, sporting events, and even a children's operetta on peace. Doves and balloons flew as symbols of peace over the skies of the war-weary country.

Children have been particularly affected by the violence. Some have been killed by nervous soldiers who mistook lifelike toy guns for real weapons. La'Onf has pressed successfully for legislation to ban toy guns in Muthanna governorate and is working to change the law elsewhere. Wearing team shirts that read "Nonviolence is our Choice," youth in Salah ad Din province (Tikrit) organized a soccer match that was attended by top local officials.

Women are also hard hit by war, violence, and inequality. La'Onf is adamant that women be accorded their rights and mandates at least 30 percent of its own coordinating committees' leadership be women. Women's groups throughout the country met to discuss nonviolence and take part in a range of activities. They denounced violence against women and visited women's unions, clubs, and institutions for victims of domestic violence.

Television, radio, and newspaper coverage of the events, as well as the widespread use of distinctive posters, brought the message of nonviolence to thousands across Iraq. Many new members have joined La'Onf as a result of the activities. Through personal interaction, cultural displays, political organizing, and discussion, nonviolence is bringing hope to the people of Iraq. 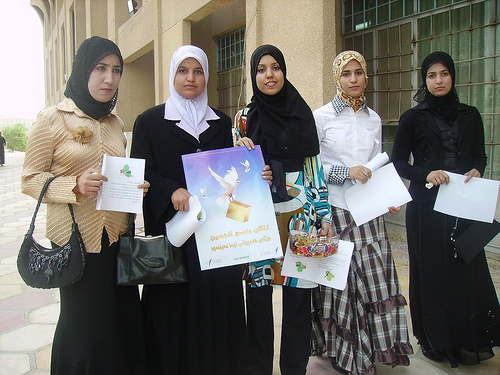 Over the past year, Peaceful Tomorrows member Terry Rockefeller has been meeting with La'Onf leaders. Reflecting on these meetings, Terry says, "What so impresses me is the way that La'Onf members are modeling the future, building within the structure of La'Onf the society they want to see (re)created in Iraq -- multi-ethnic and multi-religious, with space for secular members as well, free from sectarian strife, with great freedom for women. I truly believe that if you don't carry out peace-building in the face of conflict, you will only need to do it later. La'Onf is starting early."

*Last name withheld for the safety of the activist.

Terry Rockefeller and Valerie Lucznikowska are members of September Eleventh Families for Peaceful Tomorrows, which was founded by family members of 9/11 victims to seek just and effective nonviolent responses to terrorism and war. Peaceful Tomorrows, in cooperation with other peace and justice organizations, has been building awareness in the United States of La'Onf's inspiring work. Jennifer Kuiper provided research for this article.