WRL: 90 Years to No More War
by Matt Meyer, Photos by Ed Hedemann 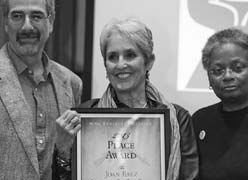 WRL started calling it a Gala, but the more we worked on it, the more it became a BASH! To conclude our 90th anniversary celebrations, we rented out the penthouse of progressive trade union 1199/SEIU—with a spectacular view of the Manhattan skyline matched only by the spectacular energy in the room. There were reunions galore, but there was nothing sentimental about this multi-generational, forward-looking encounter. In true WRL spirit, it was an intimate and informal gathering, combining good food, great poetry and music, and a fantastic array of radicals sharing plans for future resistance.

Though the 90th anniversary of WRL’s 1923 founding provided the raison d’etre of the evening, the program was anchored by the granting of three special citations: the WRL Peace Awards to Joan Baez and Daniel Ellsberg and the WRL Lifetime Achievement award, named after Grace Paley, to singer-humanitarian-activist icon Harry Belafonte. That these widely respected and inspiring figures would choose a WRL event as the space to come together, 50 years after the March on Washington for Jobs and Freedom, and at a time of almost unprecedented war and violence, is no coincidence. As many participants noted, WRL has been a home for revolutionary nonviolence and strategic direct action for a long and strong time. 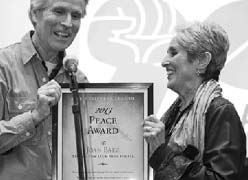 Belafonte recounted both his years in the armed services during World War Two and his years with Dr. Martin Luther King in urging folks to keep a long view of history and “keep on singing” even during tough times. Baez emphasized the significance of putting one’s money where one’s principles are, relaying her own experiences as a war tax resister. Quite dramatically, she gifted her award to fellow war tax resister Randy Kehler, who in turn introduced Daniel Ellsberg by recalling how his announcement of his draft resistance during the 1969 War Resisters International (WRI) conference inspired quiet audience member Ellsberg to release what would come to be known as the Pentagon Papers. Ellsberg himself linked his award to the resister-whistle-blowers of today, most notably Chelsea Manning.

WRL organizing coordinator Kimber Heinz and I were tasked with presenting WRL’s program in some dramatic format; Kimber noted that the current work around Facing Tear Gas is “not a campaign about simply ending the use of a single weapon.” Rather, it’s about laying the groundwork for a renewed antiwar movement—one committed to ending militarism in all its forms globally. “I am two generations younger than Matt,” Kimber pointed out. “Since Matt got involved in organizing, the number of people in prison in the U.S. has skyrocketed from 300,000 to more than 2 million and the number of SWAT team raids each year has gone from 3000 per year to over 50,000 raids annually,” accompanied by a steady militarization of police in the U. S. 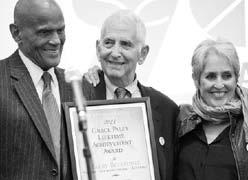 As we re-commit ourselves to bringing diverse peoples together to confront war and the causes of war, we were pleased to be joined by Iranian Initiative Against War (Havaar) activist Saman, Iraq Veterans Against the War representative Joyce Wagner. Surprise guest Nozizwe Madlala Routledge of South Africa invited us all to the next major WRI conference in Cape Town. Artists YaliniDream, Jendog Lonewolf, and Mahina Movement gave high-energy performances. As emcee Mandy Carter, National Black Justice Coalition Rustin Project coordinator and our own beloved member for over 40 years, noted: “we must keep our spirits and energy high, till we put ourselves out of business when there is no more war.”

On October 25, more than 100 police and military agencies from California and across the U.S. were joined by their counterparts from Israel, Gaum, Bahrain and Brazil for a massive SWAT team training and weapons expo called “Urban Shield.” WRL and the Facing Urban Shield Action Network, with more than 30 endorsers in the Bay Area, showed up to challenge this convergence and the militarization of the police.

A press conference on Friday included family members of people who have been killed by police, including Dionne Smith-Downs, the mother of James Rivera Jr., who was 16-years-old when he was killed by police in Stockton, CA, in 2010 with an assault rifle. Smith-Downs said, “They used an AR-15 assault rifle to kill my son. That’s a military weapon right there. And that has got to stop.” Rivera’s father, Carey Downs, added, “They shot at my son 38 times, 18 into his body. They are using military weapons on our kids in our community—we need to take a lot more action. We are not just fighting for our son but for all of our kids.”

“What Urban Shield represents to us is the epitome of state repression that has been impacting communities of color and immigrant communities for decades,” said Lara Kiswani of the Arab Resource and Organizing Center in an interview with Common Dreams. “Different strategies of surveillance against Arabs and Muslims and brown and black people are being used as tactics against our people back home. This is the militarization of the police.”

Kiswani continued, “What Urban Shield represents to us is the epitome of state repression that has been impacting communities of color and immigrant communities for decades.

While in Oakland, WRL’s Facing Tear Gas campaign organizers confronted our campaign target, Safariland, whose subsidiary - Defense Technology - has shipped tear gas and other “crowd control” weapons to the governments of Israel, Turkey, Canada, Bahrain, and Mexico, as well as to police forces around the U.S. Safariland tear gas was used to violently disperse activists at the Occupy Oakland encampment two years ago.

“Pressuring those that have the most to gain from the militarization of U.S. police like Safariland—and letting people know that these companies have ties to everyday products like phones, bikes, and public universities—is going to be the most effective way to roll this police-state process back,” said WRL organizer Ali Issa also in an interview with Common Dreams.

Building on growing resistance to police militarization in the U.S., WRL is working with Bay Area community organizations to call for Oakland’s non-participation in Urban Shield, community self-detemination, and solidarity with global freedom movements during a Week of Education & Action, Saturday, August 30–Friday, September 5, to protest 2014 Urban Shield in Oakland.

“Liz” Aberman, a fixture at 339 Lafayette Street and in the national War Resisters League office for five decades, died July 20, 2013. She came to WRL through the influence of her husband at the time, Sidney Aberman, who was a pacifist and an Executive Secretary of the WRL in the early 1950s. They later divorced, but Liz had begun working as a secretary for Liberation Magazine in 1966 and transferred her office skills to WRL where she worked until 2004. She lived with or near her daughter Fran and family in Washington State for the past eight years after advancing memory loss forced her to move from her Manhattan apartment of 50 years. She is also survived by another daughter, Rachel, who lives in Massachusetts. Both daughters were with her when she died.

Liz was presented with a calligraphy scroll at her “retirement” party in 1992, and the inscription on it by David McReynolds neatly summed up Liz’s invaluable contribution to the work of the WRL:

HOORAY FOR LIZ !
Others have traveled to exotic places,
written pompously, spoken wisely,
made weighty decisions in hours of meetings.
In thirty years others have come and gone
as comrades donned suit and tie for flashier occupations.

But behind the scenes in all this time
typing letters, changing addresses,
adding up checks
WRL has had Liz
who has done the essential work that keeps us going
with good humor, dedication, and good will
HOORAY FOR LIZ!
and thanks.

Despite his posh upbringing and being listed in the Social Register, Scott Herrick was a relentless nonviolent direct actionist with WRL, Committee for Nonviolent Action, and the AFSC for almost 60 years. In the mid-1970s he was hired by the Miami Peace Education Office as its field secretary.

Though he was on the WRL Executive Committee (1974-1978), he preferred doing peace actions with his sailboat -- “Satyagraha” in the 1960s and “Mondecivitano” (“World Citizen,” in Esperanto) in the 1970s -- walking for peace, speaking, or promoting the World Citizen Passports he designed.

Four of his most notable actions were CNVA’s 10-month 5800-mile San Francisco to Moscow Walk for Peace in 1960-61, for which he was a key walker and strategist; CNVA’s 1963 Quebec to Guantanamo Walk for Peace; at least five illegal sailings (sponsored by WRL and AFSC) in the early 1970s from Miami to Cuba in an effort to defy the U.S. trade embargo by bringing musical instruments and art from American children to Cuban children and vice versa; and WRL’s dramatic simultaneous stealth Red Square-White House actions against nuclear weapons in 1978, which generated enormous publicity world wide. Scott -- who proposed and helped finance the action -- and six other WRLers traveled to Moscow to pass out leaflets just outside the Kremlin while unfurling a banner reading (in Russian) “USA and USSR: Disarm Now!” They were briefly detailed.

Besides being an activist, dynamic speaker, passionate vegetarian, Scott made headlines for nonpolitical reasons in 1961 when he and Bea Burnett married. Bea, a Mercedes Benz showroom fashion model and spokeswoman as well as antinuclear peace activist, joined the Walk to Moscow in San Francisco, was recruited to do advance work, including setting up press interviews and contacting police. They divorced in 1964.

Scott died at 87 in Great Barrington, MA, apparently of prostate cancer. He is survived by his second wife, Barbara Herrick.

On August 22 of 2013, WRL lost Mayer Vishner, 64, who made a conscientious choice to end his life. According to Michael Ventura, thoughtfully chosen inheritor of Mayer’s cat, Adrienne, the devout pacifist exclaimed, “The only life I have the right to take is my own.”

Born February 13, 1949, Mayer sought a more authentic and peace-filled world. During a folk music radio program, he heard of a newly formed Free School, thus prompting the 16 year-old to trek from Queens to 14th Street where he took Peter Stafford’s course on psychedelics and The Realist creator and later Yippie Paul Krassner’s class on Media and Satire. Other instructors included WRL’s David McReynolds and Ed Sanders and Tuli Kupferberg of the Fugs. Here Mayer met political allies and life-long friends.

Mayer was one of the most effective behind-the-scenes organizers who, like many activists, adopted the movement as his family. From WRL ancestors Karl Bissinger and Ralph DiGia to McReynolds, people described Mayer as an excellent organizer and a wonderful person. He was a major contributor to the newly developed WIN magazine, and helped organize benefit concerts for WIN, Committee for Non-Violent Action (CNVA) and the WRL. He produced a WRL peace calendar on rock music and was a pivotal force in the Yippies. He remained loyal to his ideals and his friends throughout his life, organizing a benefit concert for Abbie Hoffman and assisting him fearlessly during his time underground. In a 2006 interview, he told how he and WRL comrade Maris Cakers hitchhiked to the Chicago 1968 Democratic convention, which he helped organize, and tearfully recalled how Maris took the beating from the cops.

Mayer’s life and death reflects the struggles of living the authentic activist life in a militarized consumer-based society. His closest friends and family members knew of his personal demons, yet, the younger generation saw the Mayer that welcomed you at WRL gatherings and shared stories and laughs. He’s been called everything from “effective” and “loveable” to “fucked-up.” But all miss him, and we remember the dedication and laughter he continues to instill in us. Borrowing Paul Krassner’s last words Mayer heard, “Peace Out!”. Mayer, you were loved.