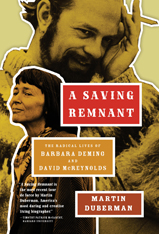 And it is really no time to celebrate. Recent Supreme Court decisions greatly narrowed the ability of public universities to use affirmative action in their admissions processes, because a young white woman sued the University of Texas/Austin for not gaining admission (though there were Black and Latino students admitted who outperformed her GPA and SAT scores) and decided on a case that basically gutted the core provisions of the Voting Rights Act. At the same time, many gays and lesbians are in fact celebrating the Supreme Court decision to overturn the Federal Defense of Marriage Act (DOMA), which gives federal protections to same-sex couples who are legally married in their states.

It’s hard not to read historian Martin Duberman’s book, A Saving Remnant: The Radical Lives of Barbara Deming and David McReynolds, in this context of the present moment. The book, originally published in 2011 and out in paperback in 2012, documents the lives of McReynolds and the late Deming and the way in which their lives, writing, and activism trace the connections between social movements for peace, racial justice, feminism, and gay liberation. It also shows the devolution of their friendship, and the connections between those movements, creating an up-close and personal history that provides a great backdrop to examine the present moment.

Both Deming and McReynolds might be considered unlikely leftists—both born into families of relative wealth and comfort. Deming, born and raised in Manhattan, New York City, in 1917, seems to have been very much informed by her parents’ loveless marriage. Her mother once confessed to her that she’d married Barbara’s father at the urging of her own mother. When she later fell in love with another man, Barbara’s dad threatened to keep her from her children if she left. She remained married to him, but her misery was apparent.

Deming’s story of coming to her sexuality undermines many contemporary narratives that suggest that no one was out before Stonewall, or that they certainly didn’t have sexually radical relationships and partner formations. In fact, a teenage Deming had an affair with her mother’s best friend, many affairs during her years at Bennington, later dated a woman who eventually married Barbara’s brother (with some overlap), and was in a polyamorous, co-habitating relationship with painter Mary Meigs and author Marie-Claire Blais for many years.

David McReynold’s story is slightly different. Born and raised in Los Angeles in 1929, David has been out as a gay man for many years—a fact he largely credits to his dear friend dance icon Alvin Ailey, who encouraged David by example that one could be gay and not self-loathing. While out to his family at a fairly young age, his father in particular was never really approving. At the same time, David was never particularly comfortable in what became a bourgeoning gay community of nightclubs, bars, and underground public sex venues. But as a very young man, he began to question the prevailing logics of homosexuality of the time that were thought to be sympathetic. Writing to a friend, he notes, “I think very strongly that the psychiatrists and Freudians are wrong when they say...that homosexuality is an infantile regression.”

Unlike Barbara, David became politically active very early on, and a decade before her. While in high school, David had begun reading The Nation and The New Republic, and, while he was still a devout Baptist, began actively working with the Prohibition Party, before leaving in the early 1950s and getting more active in socialism and peace movement efforts. But like the now well-known story of Martin Luther King, black gay peace and civil rights activist Bayard Rustin also heavily mentored David, after David became a young peace movement hero for refusing to serve in the Korean War. Throughout the 1950s, David was deeply involved in the Socialist Party, though remained very critical of the violent totalitarianism of Communist regimes across the globe.

Barbara, while her identity as a feminist can certainly be spotted as forming before she got politically active, took a trip to several parts of the world in the late 1950s with Meigs. It was on her travels that she came across Gandhi’s teachings about nonviolent struggle (and seeing the impact of armed struggle at the beginning of post-Revolution Cuba) that she began to really think in terms of political struggle. While she became committed to nonviolence as a political strategy, she also believed in a woman’s right to self-defense, and didn’t rule out the need for armed struggle at various points in time and place.

By the early 1960s, Barbara was a member of the Committee for Nonviolent Action (CNVA), and David served as field secretary for WRL. Both were looking for ways to bring the peace movement into alignment with Black struggle. “Don’t both movements perhaps stand in need of new help from each other?” Deming argued in a letter to A.J. Muste and David Dellinger. “Hasn’t the time come to try and define them much more clearly as part of one movement—a movement to try to bring into being (or more clearly into being) ‘the beloved community,’ a nonviolent world?” Later, Barbara would begin to infuse her politics of nonviolence into her feminist views, understanding nonviolent struggle as a manifestation of androgyny—both passive and active, masculine and feminine.

Both Barbara and David meet in the 1960s as their activism against the war in Niet Nam gains steam as leading figures in the CNVA and WRL respectively. As key activists who were organizing during very intense times in the movement, both were prolific in their work as writers—becoming two key voices in peace and antiwar movements. They were also pretty close politically throughout this time. David never backs away from being visible as a gay man in the movement and in his work. In the late 1960s, as the feminist movement is really beginning to take shape, Barbara very much begins to become politicized by much of those early writings, and after the Gay Liberation Front forms in the aftermath of the Stonewall Rebellion, she begins very much to organize within radical white lesbian feminist spaces. It is here that their politics begin to diverge.

The 1970s proved personally difficult for both—David had begun to get over an addiction to alcohol and pursue therapy to rid himself of his residual stigma of being gay, while Barbara’s health was failing and she, along with her partner Jane Gapen, relocated to Florida. What begins as a dispute over whether David would support an effort by Deming and other feminists to ban a controversial film, Snuff (where a woman was supposedly murdered and dismembered on camera; it was revealed by Variety to be a hoax). David didn’t endorse the film but felt it was an issue of First Amendment free speech and didn’t support a ban.

The argument extended to other grievances with one another. Barbara arguing men editing WIN Magazine (which David was instrumental in taking over from CNVA’s New York affiliate, when the group effectively merges with WRL in 1968) undermined the work of radical feminist writings, in the late 1970s, ends their friendship.

The fight effectively ended their relationship and proved very painful to Barbara, who died in 1984 of cancer. David would continue to be on staff at the War Resisters League until 2003.

Though David has since stated he feels responsible for the fallout, in many ways their relationship was just one of many that dissolved amongst movement organizers over the course of the 1960s–1980s. To this day, there are still factions of the Left that believe that movements of women, queers, Blacks and other people of color formations (so-called “identity” politics) have gotten in the way of “real” issues like labor exploitation, militarism, and climate change. But in a racist and highly gendered society, all of these issues are experienced by different groups as violence precisely because of race or gender.

Similarly, many activists who work in identity-based formations can sometimes default to culturally based arguments and ignore the role of the state, capital, policy, or political economy in their frameworks. These activists may sometimes assume that we can “build alternatives” to these outside forces while—naively, in my opinion—thinking that revolutionary future visions can be won without a direct confrontation with capital and the state, in all their formations. To be sure, the situation of the Left in the U.S. is more complicated than this, but it is safe to say that these two differing ideas of how to organize, what the issues should be, who should be at the forefront, and what the proscriptions should be, remain a huge tension. And in one way, the tension between Barbara and David has been quite common.

I’m not making an argument for one direction, nor am I arguing for a hybrid, but the recent decisions by the Supreme Court, having turned the legislative gains of the era inside out, is the extent to which the Left has lost a lot of ground in the last half century, and remains mired in old frameworks and battles.

So we are, at the early start of the 21st Century, in many ways having to remain constant antagonists to militarism, racism, capitalism, and patriarchal domination. Though we are entering a period where “gay rights” is being incorporated into the logic of state-sanctioned violence by allowing gays to serve openly in the military, we are equally rolling back legal protections (however flimsy) against government surveillance, voting rights, and affirmative action, and health care for many will continue to remain out of reach.

By tracing the parallel relationship between two critical figures in ending militarism, sexism, and racism, A Saving Remnant is a very smart way to trace the history that birthed the mass movements of the mid 20th Century. May it see us through the uncertain days we have ahead of us.

A Saving Remnant: The Radical Lives of Barbara Deming and David McReyolds
By Martin Duberman

Kenyon Farrow is a writer and activist based in New Orleans. He’s the co-editor of Letters from Young Activists: Todays Rebels Speak Out, and A New Queer Agenda (an issue of the online journal Feminist & Scholar). More of his work can be found at www.KenyonFarrow.com.