Outsiders Save the Earth 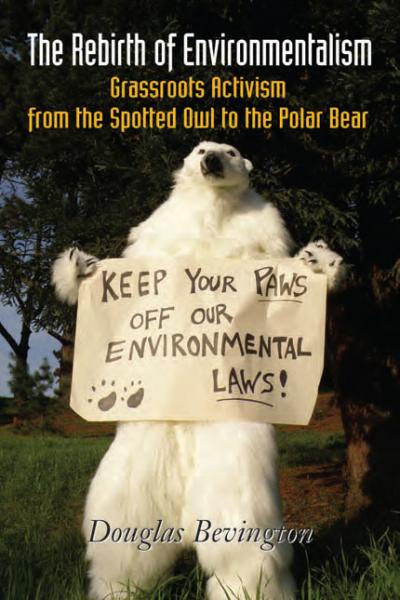 The Rebirth of Environmentalism: Grassroots Activism from the Spotted Owl to the Polar Bear
By Douglas Bevington
Island Press, 2009, 244 pages, $35.00

A hat is passed around at a meeting of local activists in eastern Tennessee; $29 is raised to fund their environmental campaign. A disgusted Fish and Game employee carries a third dead caribou out of the woods; he declares: “It’s over.” Young activists live in tepees, hitchhike into Albuquerque to do research in the university library all day, and sleep in the bushes outside the library at night. The first of these actions leads to a Supreme Court ruling that empowers the Endangered Species Act; the second leads to novel legal strategies that preserve millions of acres of wilderness; the last results in one of the most important new environmental groups in the country, the Center for Biological Diversity.

The Rebirth of Environmentalism, although focused on the environmental movement—and mainly forestry and endangered species issues—addresses questions and has lessons for almost all social movements: organizational structure; the role of foundations in channeling social change, direct action, legislation, and litigation; and especially the relationship of grassroots groups to the large national groups.

Whenever the environmental movement is mentioned, the mainstream media and much of the public think mainly of the 10 or 12 large national organizations based in Washington, D.C. A very popular and controversial essay a few years ago, “The Death of Environmentalism,” focused almost exclusively on these national groups; this book is in many ways an answer to that essay. There are hundreds of grassroots environmental groups around the country, most formed over the last two or three decades, that have played a prominent role—the author argues the major role—in environmental protection over the last quarter century.

The book documents that “the proliferation of more radical grassroots biodiversity groups in the late 1980s and 1990s corresponded to a marked increase in forest and endangered species protection.” For example, the number of board-feet cut in national forests in 2004 was one-sixth of what it was in 1988.

Many of these “grassroots biodiversity groups” had their origins in the direct action group Earth First!, which began in 1980 as a critical alternative to the national environmental organizations. Earth First! was initially known for “monkeywrenching” (essentially sabotage), but moved on to a mass civil disobedience approach. These groups developed in response to diverse environmental issues around the country, but they shared a number of things in common in contrast to the national groups: small formal organizations with limited staff and low or no pay, direct action tactics, limited funding, and little or no connection with lobbying or the Democratic Party.

The author doesn’t pretend to offer a comprehensive survey of all of these groups.  Environmental justice is hardly mentioned, for example. Instead, the focus of the book is on three case studies for the broader lessons they offer. The first study is of a significant movement by grassroots groups in northern California in the Headwaters Forest campaign to preserve the largest remaining stands of old growth redwoods in the country. The second describes a prolonged effort to reform the Sierra Club and get it to take a more activist role. And the third describes how a grassroots movement evolved into an innovative and influential national group.

Throughout, the author champions an outsider strategy. The insider strategy depends on privileged access to politicians and power brokers to influence political deal making and attempts to make change largely through conventional participation in electoral politics. The outsider strategy relies on more contentious tactics that directly challenge harmful activities.

Scores of books have been written about grassroots movements. This is one of the few books that also examine how established national groups have often been problematic and sometimes even counterproductive in bringing about meaningful social change. The book documents a number of instances where mainstream national environmental groups stonewalled on efforts to win significant advances or even compromised to the point of relinquishing important prior gains (such as the Sierra Club’s support of legislation that would overturn a landmark 1989 Endangered Species Act injunction).

In contrast, the message of many of the grassroots groups in the book is that environmental advocates need to ask for what they really want or they will never get it.

As a Center for Biological Diversity activist concluded, “Many groups are hampered by fear of upsetting their congressional connections, their funders, the media, etc. While we feel the pull of such things, we daily remind ourselves that social change comes with social tension, and our job is to create that dynamic tension, regardless of the pressure to back down or compromise.”