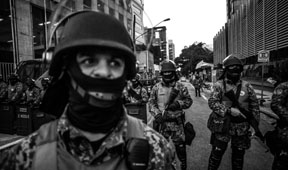 On 12 April, Rio police invaded the Engenho Novo favela to enforce a court order evicting 5,000 squatters occupying the abandoned Telerj industrial complex near the legendary Maracanã football stadium. Some of the evictees resisted fiercely, confronting the invading force with sticks, stones and Molotov cocktails, setting numerous vehicles alight including police cars. Days later, residents of the Pavao-Pavaozinho favela took over the streets of the wealthy beach neighborhood and tourist destination Copacabana to protest the suspected police torture and killing of popular dancer Douglas Perriera. These are just two examples of growing, militant social justice mobilizations in Brazil in the run up to this summer’s World Cup Finals and the 2016 Olympics. In both preparations for and response to the protests and the criminalized drug trade, the Brazilian military and Rio police have undertaken long campaigns of armament and retraining, turning to a significant extent to Israel and its experience suppressing Palestinian resistance to colonization for these arms and training.

The Brazilian military, Federal and Rio Police escalated ‘security’ preparations with F.I.F.A.’s 2007 naming of Brazil as as the 2014 host. The Israeli firm International Security and Defense Systems – a private military firm headed by Leo Gleser that in the 1980s helped train and arm the Contras to overthrow the Sandinista government in Nicaragua – carried out sniper training for police special forces and had already helped the securitization of the of the 2007 Pan American Games in Rio. In 2008 Verint Systems – an Israeli-American surveillance and communications firm implicated in the National Security Agency mass wiretapping – won a contract for a mass surveillance system, and another the following year for surveillance systems in Rio’s jails.

Also in 2009 Plasan Sasa, in cooperation with American firm Oshkosh Trucks, sold Sand Cat armored vehicles to the Rio police for use in favela raids. The following year the Israeli and Brazilian governments signed a security cooperation agreement to exchange technologies and training with a special focus on securitizing the World Cup and Olympics. In 2010 and 2011, Elbit Systems won contracts with the Brazilian Air Force for Hermes 450 unmanned aerial vehicles (UAVs or drones). In the ensuing years the level of military and police cooperation has grown including sales of ever more advanced UAVs, communications and surveillance systems.

These Israeli technologies were developed out of Israeli experience in decades of Palestinian resistance to Zionist colonization. This experience is, in fact, their primary selling point. For example, an Elbit Hermes 450 promotional brochure reads that “The Hermes 450 is the primary reconnaissance platform for the Israeli Defense Force” and notes it has over 100,000 hours of operational experience. It further celebrates Hermes experience in imperial conquest noting that at the time of the brochure it was “currently employed by the British Army in southern Iraq recently surpassing 8,000 operational hours.” Alternately put, these are not products of an Israeli arms industry, but of an anti-Palestinian one. To Israel, Palestinians are a surplus population and its arms and homeland security industries are a means to surveil, control and remove said population and pacify Palestinian resistance to oppression.

The Federal and Rio police forces along with the government have stated goals to “cleanse” Rio before the World Cup and Olympics. The “cleansing” started with the Pacification Police Units (UPPs) much celebrated in the mainstream Brazilian and international press. Despite declarations from successive Workers Party administrations that the mega-events would be good for all Brazilians, the number of total estimated evictions from both events range between 30,000 to 1.5 million, the latter still less than the over two million slum dwellers forcibly removed for the Beijing Olympics. And just as a main legacy of the 2012 London Olympics is the massive gentrification of London’s East End, developers are descending upon favelas near games sites and skyrocketing the rents and housing costs. In the Vidigal favela, rents have gone up by over 300% since the UPPs invaded the area. Escalating prices from real estate speculation is one reason many of the tenants in the abandoned Telerj complex occupied the site in the first place. The circumstances of Brazil’s working class favela residents – a population former President Fernando Cardoso called “the unemployable,” London working class and migrant populations, Beijing’s impoverished floating citizenry and Palestinians under Israel control are all different. But these populations are all cast – to one degree or another – as ‘surplus’ to the national plan and warehousing them away from the humanized citizenry requires extensive violence.

The World Cup and Olympics not only bring mass displacement, but also a gross misallocation of public funds to create, in the case of the World Cup, “FIFA-quality stadiums.” The Nation columnist Dave Zirin in his new book Brazil’s Dance With the Devil quotes Brazilian football legend Romário’s on the 2013 mass protests in Rio, “FIFA is the real president of our country. FIFA comes to our country and imposes a state within a state. [...] The money that has been spent on the [one] stadium could have been used to build 150,000 housing units.” This is a common refrain amongst Rio protestors who demand “FIFA-quality schools” and “FIFA-quality hospitals”.

The April resistance against police violence and evictions, the 2013 mass protests and the ongoing mobilizations against the Workers Party austerity programs and massive investments in stadiums to be used just once are portrayed in much of the Brazilian and international media as security problems for and distractions from the World Cup and Olympics rather than a consequence of them. This combined with the long history of state and gang violence in the favelas, is used to rationalize further security investments, including importing more anti-Palestinian technologies. FIFA and the International Olympic Committee have rigid security standards – security for and from whom is never explicitly stated, as such clear racist and capitalist utterances are considered impolitic – for their mega-events that approach that of airports. FIFA and the IOC continue to pressure Brazil’s government to invest in costly securitization of the infrastructure at the expense of segments of Brazil’s population, especially the working class African- descended populations who comprise the majority in the favelas. Little pressure is needed, though, as the Workers Party government is a champion of both events and deflects criticism of the preparations under the rubric of nationalism. The government and media portray Olympics and World Cup as a confirmation of Brazil’s rise to global power status. The protests are portrayed as threatening this confirmation.

Israel is at most, very peripherally responsible for Brazilian state violence relating to the World Cup and Olympics, and even then only at the tactical level. Brazil’s ugly history of state violence against marginalized populations predates Zionism. Nor is Israel the sole provider of arms and ‘security’ training to the Brazilian military and Rio police. Brazil purchases arms from a variety of nations – all of whom, like Israel, derive their technologies at least in part from violent experience – and Brazil’s military has gained extensive experience in slum warfare as one of the occupying armies in Haiti. Yet that Israel is a major supplier as Brazil seeks to create sanitized zones for the international elite to play during the World Cup and Olympics cannot be surprising. 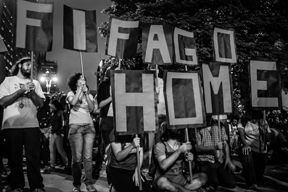 A major goal of Israeli military, paramilitary and police forces is to create sanitized spaces where Israeli civilians can go about their daily business without encountering Palestinians, especially Palestinians struggling against Israeli policies. This leads to oppressive technologies that are then exported around the world. And while Brazil needs no help from Israel in targeting its marginalized populations, it can still import know-how. It is the Israeli-Palestinian relationship itself of colonizer-colonized that is being exported and will to a significant extent inform Brazil’s mobilizations of state violence in support of the ‘cleansing’ of Rio for the pending World Cup and Olympics.

Photos licensed under CC BY-NC-SA 2.0. Mídia NINJA can be found online at http://www.flickr.com/photos/midianinja/

Jimmy Johnson is Detroit-based writer, formerly working with the Israeli Committee Against Home Demolitions. His writing has appeared at The Electronic Intifada, Mondoweiss, Truthout, and elsewhere.