STAND WITH THOSE FACING TEAR GAS IN PRISON

In 2013, the War Resisters League put out a call in Critical Resistance’s The Abolitionist—a newspaper that reaches thousands of people in prisons and jails—for stories of having had tear gas or pepper spray used against them.

Soon we received over a hundred responses and got permission to republish excerpts—some with explicit permission to use name and location for the sake of challenging tear gas abuse in prisons.

Join WRL in demanding that Sally Q. Yates, deputy attorney general of the Department of Justice, take action against human-rights abuses on prisoners involving tear-gas weapons nationwide. Across the United States, the use of chemical weapons—most of them banned in war under the Geneva Protocol—against those confined in jails and prisons has become disturbingly common, and is a yet another example of how militarization is deepening violence on all levels of society. Given the DOJ’s recent recommendations to constrain solitary confinement, this issue should command their attention as well.

Today, we are standing with those teargassed, and demanding an end to prison torture.
Join us!

Film created by Freya Powell from excerpts of letters written from those being gassed on the inside, "On fire like hellfire" 2016, Single channel video, 21:16

The harrowing experiences written in the letters described sound like nothing less than torture:

“I myself have been pepper sprayed about (15) times over the last 8 years of incarceration. I am in a place now where they use chemical agents for a variety of different punishments.” The letter writer went on to list those punishments: Grenades, pepper spray, tear gas, evaporating fog pepper-spray, pepper ball guns, tasers. “All while locked in a cell….I can have (10-20) different inmates tell you horror stories.”
–A man imprisoned in Mount Olive Correctional Complex, West Virginia, 2014.

“They didn’t hit me with the gas until the fight was over and I was already in handcuffs and shackles. The captain sprayed me directly in the face. I immediately began to choke, snot, tears, and saliva spewing from my face. It felt like I was breathing fire. A couple minutes later I began to vomit…. I was not allowed to wash the chemical off until three days later. So for those three days the chemicals continued to burn my flesh.”
–A woman imprisoned by the Colorado Department of Corrections, 2014. 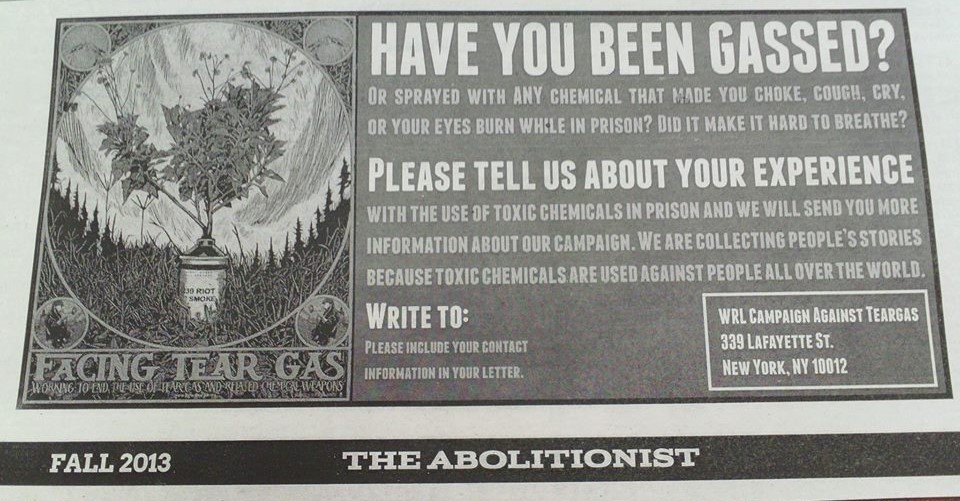 Our aim is to break silence on this issue, towards ending chemical weapons use and torture on the inside and everywhere.

Reports from prisoner support and justice groups and legal projects all over the U.S. have documented the regular spraying of prisoners with pepper spray, often accompanied by other routine torture practices, such as keeping them bound in a restraint chair covered in copious amounts of pepper spray for long periods of time. Prison wardens have the authority to directly investigate these abuses and terminate the use of pepper spray against prisoners. We have found documented cases of pepper spray being used against people in prisons including Louisiana State Penitentiary, and prisons nationally, from PA, WA, IL, FL, VI, VA, TX, CA, MD, AZ, GA, OH, MA, RI, MI, MT, WV, MO, and CO:

COMPANIES WHO SELL TEARGAS TO PRISONS

These practices are linked to a main engine of militarization across our society, SWAT or ‘tactical’ trainings. This link becomes clear when the very same companies mentioned above, such as Combined Systems Inc. and Safariland, hawk their gear at many of the SWAT trainings and weapons expos that WRL campaigns against nationally. 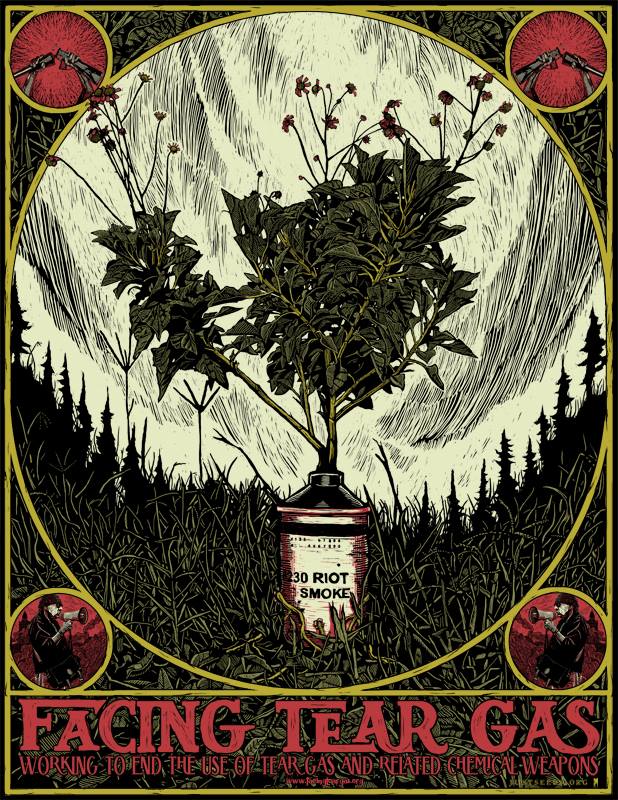