Tuesday the Saudi Crown Prince, Mohammed bin Salman, is meeting with President Trump. Meanwhile, the Senate likely will vote today on ending US support for the Saudi war on Yemen. The prince plans to travel to NYC next week, where protestors this morning called for cancellation of his visit. The Saudi Crown Prince is the chief architect of the 3-year-long bombing and blockade in Yemen.

The NYC protest began at 9:00 on NY City Hall Steps, while another protest is scheduled to begin at 11:00 in front of the White House, where Trump is expected to receive bin Salman. Additional protests of the prince are planned for the rest of this week in Washington, DC:

Protests are being planned in additional US cities where the Saudi Crown Prince is expected.

“For three years now, I have witnessed the total destruction of my ancestors’ homeland and the pain and suffering of family, friends, and millions of innocent Yemenis as my beloved America continues to fuel and support Saudi Arabia’s war on Yemen.” – Rabyaah Althaibani, NYC Protest Co-Organizer

"For more than three years I have seen the world forgetting the war on Yemen. I have seen the people who didn't get killed by rockets and Saudi bombs killed by slow death. Sixty-five percent of the Yemeni people have been working without a salary for two years. They need immediate help. The people are dying from hunger and disease from no electricity, no water, and no gas. Even the environment is polluted by the use of internationally prohibited weapons. I have a hope that the USA is going to stop the war and save Yemeni people's lives." – Somia Alrowmeim, NYC Protest Co-Organizer and MC

"The population of Yemen is sick and starving, and being bombed the Saudi-led coalition with U.S. support. Our elected officials -- Senators Schumer and Gillibrand, and Mayor Bill de Blasio -- must end support for this unconscionable war impacting Yemeni families, in New York and in Yemen." – Kate Alexander, Policy & Outreach Director, Peace Action NYS, Protest Co-Host

"Time is running out for the people of Yemen. We thank Senators Kirsten Gillibrand and Cory Booker for supporting the bill to end US support for Saudi Arabia's war on Yemen. We demand that Senators Chuck Schumer and Bob Menendez follow their lead. Congress should listen to the American people: Stop bombing children." -- Isaac Evans-Frantz, Unpaid Organizer, Action Corps NYC, Protest Co-Organizer

"Mohammed bin Salman's propaganda tour of the United States should not be allowed to obscure the devastating impact of his U.S.-backed bombing campaign and blockade of Yemen, which has killed thousands and put millions more at risk. The best way to mark his visit is for the Senate to pass the Sanders/Lee/Murphy bill that would end U.S. support for Saudi air strikes that Rep. Ted Lieu (D-CA) has said 'look like war crimes.'" 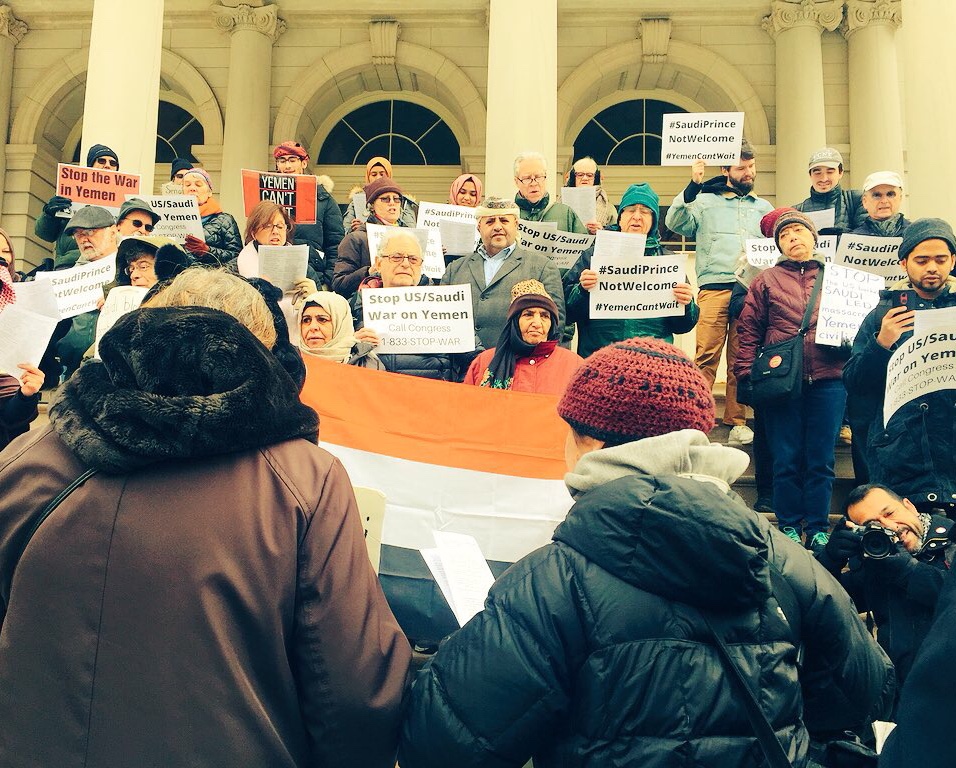 Members of the NYC Metro Raging Grannies and Their Daughters led the protesters in song, and others, dressed as Saudi Crown Prince Mohammed bin Salman and US President Trump, held props representing money and war planes.

“Mohammed Bin Salman employs an army of lobbyists and PR firms to sell himself as a reformer when he is really a war criminal and a power-hungry bully whose ego rivals that of Donald Trump. It is absurd that the US is in bed with this ‘prince’ who mercilessly bombs Yemen, shakes down Saudi businessmen, captured the Lebanese prime minister, concocted a rift with Qatar and even kidnapped his own mother. The Saudi monarchy also jails and beheads dissidents, discriminates against the Shia minority, and forces women to live under a repressive male guardianship system. It is not a regime the United States should be arming and abetting.” -- Medea Benjamin, CODEPINK co-founder and author of a book on Saudi Arabia, DC Protest Co-Organizer

BACKGROUND: The war in Yemen is creating what the UN describes as the world’s worst humanitarian crisis: thousands of civilian deaths, untold hunger, and the worst cholera outbreak in recorded history with over one million suspected cases by the end of 2017. This crisis has been deeply exacerbated by the Saudi-led military intervention and blockade, which has received critical support from both the Obama and Trump administrations in the form of arms sales, targeting assistance, intelligence sharing, and mid-air refueling of Saudi bombers. US bombs have been used in Yemen against markets, hospitals, funeral halls, and residential neighborhoods. This support has never been authorized by Congress.

Despite Saudi Arabia’s reported measures to provide humanitarian relief, humanitarian and commercial access remains highly restricted. It is against this backdrop that the chief architect of the Saudi intervention, Crown Prince Mohammed bin Salman, is visiting the US. Meanwhile Senators Bernie Sanders (I-VT), Mike Lee (R-UT), and Chris Murphy (D-CT) have introduced a bill to end the unauthorized role of US forces in the Saudi-led war on Yemen. The bill is expected to be debated Tuesday or Wednesday.

*The DC events are being organized by CODEPINK: Women for Peace, Peace Action, Just Foreign Policy and World Beyond War.