The War Resisters League affirms that all war is a crime against humanity.  We are determined not to support any kind of war, international or civil, and to strive nonviolently for the removal of all causes of war, including racism, sexism and all forms of exploitation. 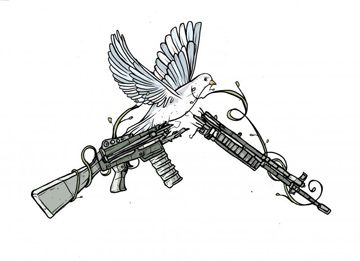 We hope this message finds you at peace despite seemingly endless moments of challenge, hardship and the ongoing horrors of war and militarism. We wanted to take this opportunity to reconnect with you all – our members, allies, comrades, and friends to provide an important update on behalf of the organization.

The War Resisters League was founded in the aftermath of a horrendous European war by those who resisted conscription and their supporters. They united around a powerful affirmation: war is a crime against humanity. Over the course of almost 100 years since that time, our commitment to this principle has been tested by many political struggles and military conflicts in different parts of the globe, yet we have continued to affirm our founding principles. Today, the eyes of the world are again fixed on war in Europe because of Russia’s devastating invasion of Ukraine, and we are challenged again to articulate what it means for people in the United States to resist war.

Linda Marie Thurston, who spent a lifetime forging connections between and among people, organizations, and ideas in peace and justice movements, passed away in her Brooklyn, NY home due to natural causes. She was 62 years young.

Linda was born in Providence, Rhode Island, on August 7, 1958, the oldest child of James Thurston Sr. and Barbara Thurston (née Oliver). She attended Classical High School and excelled academically, where, as she liked to tell it, a bet between guidance counselors led to Linda applying and being accepted to Harvard University. Linda graduated from Harvard in 1980 with a B.A. in Cultural Anthropology where she was a student organizer against South African apartheid and was the president of the Black Community and Student Theater. After working for some years at the American Friends Service Committee, Linda took time out to attend grad school at Temple University where she obtained an M.A. in Sociology in 1994.

Linda was a visionary, intellectual, activist, and social weaver who committed her life towards ending the violence of policing, imprisonment, and militarism, and building systems that promote community restoration, reconciliation, accessibility, and invest in life-affirming resources. Her contributions to the movement to abolish the prison industrial complex are vast and significant. As Director of the American Friends Service Committee’s National Criminal Justice Program, Linda worked with advocates and former prisoners on developing curriculum and organizing conferences, community forums, and workshops promoting prisoner rights and alternatives to imprisonment. Serving in this capacity, Linda edited the 1993 book A Call to Action, by the National Commission on Crime and Justice. As Director of Amnesty International’s Program to Abolish the Death Penalty, she coordinated their strategy to abolish the death penalty, and toured the U.S. to build their campaign. In addition to this advocacy, Linda steadfastly supported campaigns to acknowledge and free U.S.-held political prisoners, including her involvement in co-founding the International Concerned Family and Friends of Mumia Abu-Jamal in 1992. Linda also participated in the founding of Critical Resistance, a national organization working to abolish the prison industrial complex, supporting their work nationally and in New York City in the late 90’s and 2000s and, most recently, serving on their Community Advisory Board.

One of Linda’s skills was effortlessly communicating her capacious vision across a wide variety of audiences: as a radio host at W.I.L.D, giving testimony on C-SPAN, and meeting with religious congregations, to name a few. But even deeper than public speaking, Linda communicated her abolitionist vision through the way she treated others, every single day. She held firmly to the understanding that people were “not all good, and not all bad,” and was able to hold the complexity of what it meant to be human without romanticization nor disposability. And it’s this energy that brought people together around her, and sustained relationships for decades, and in some cases helped cross-pollinate political ideas, such as the necessity to be both abolitionist and antimilitarist. As her cousin, Kristine Keeling, said, "Linda was committed, she was committed to her community, to the disenfranchised, the displaced, and those who struggled to be heard. She moved with grace, integrity and joy, regardless of the heavy mantle she carried."