WHAT: International Association of the Chiefs of Police Conference (IACPC)

WHERE: 2018’s IACPC will be in Orlando, Florida. Last year's was in Philadelphia - Pennsylvania Convention Center, 2016's was in San Diego, and the year before that was in Chicago

WHO: In their 2015 conference 15,335 individuals attended, from 83 different countries, from Albania to Haiti to Iraq, and from Seattle to Texas, with 699 companies exhibting. See more here.

WHAT THEY SAY IT IS: The IACP Annual Conference and Exposition is the largest and most important law enforcement event of the year — more than 14,000 public safety professionals come here to learn new techniques, advance their knowledge and careers and equip their department for ongoing success. “When you bring your team to IACP 2015, your agency will achieve better results and operate more efficiently and effectively.”

From 2017's description: "Every year, the IACP Annual Conference and Exposition supplies you and your department with powerful advantages, bringing together an unmatched educational program, renowned keynote speakers, community-building special events and the largest collection of tactical equipment and technology solutions available for law enforcement. Join thousands of dedicated professionals from federal, state, county, local and tribal agencies at IACP 2017 — you and your team will get the intelligence, strategies and solutions you need to sharpen your edge and better serve and protect."

FOR INFO ON THE RESISTANCE TO IACP, CHECK THIS OUT! 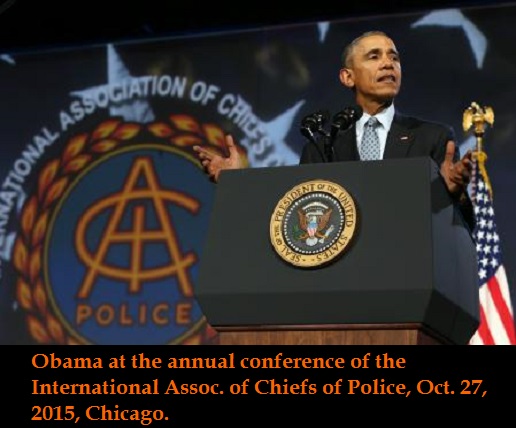 IN-DEPTH: The International Association of Chiefs of Police was founded in 1893 in Chicago, Illinois. Originally intended to serve as a means to apprehend and return criminals who had fled agency jurisdictions in which they were wanted, the association has grown to serve as one of the largest police chiefs organizations in the world.

The International Association of Chiefs of Police (IACP) is a dynamic organization that serves as the professional voice of law enforcement. IACP is also a membership-based annual traveling conference and exposition that supplies police departments with trainings, workshops and strategies.

The International Association of Chiefs of Police (IACP) implements the International Police Education and Training (IPET) program on behalf of and in partnership with the U.S. Department of State’s Bureau of International Narcotics and Law Enforcement Affairs (INL):

IPET Armenia
In 2012, Armenia served as an important test case for the viability of the program.

IPET Tunisia
The most recent and current iteration of the IPET program is focused on media and community relations in Tunisia. The IACP is working with the Tunisian National Police and National Guard to establish a Media and Community Relations Unit within each organization. While in the U.S., the Tunisian officers had the opportunity to work alongside the Boston Police Department’s media unit and Northeastern University.

The IACP Center for Police Leadership and Training is looking for State and Mid-Sized City Law Enforcement Agencies to be partners in an exceptional opportunity for the International Law Enforcement Community: Instituting a Democratic Style of Policing in Iraq.

IACP is working with over 20 state, local and federal partner law enforcement organizations to create an environment where the Iraqi, Kurdish and American participants can train and work together in a manner that encourages the free exchange of information, ideas and the establishment of professional and personal relationships. By shadowing officers in host police departments, and training with them on the street and in the classroom, the Iraqi and Kurdish officers get classroom learning and “hands on” field training. By working and socializing together, we establish trust between the host officers, the IACP staff and the Iraqi participants, laying a foundation that sustains the program in the future through the global reach of technology.

PAST PROTESTING OF IACP: 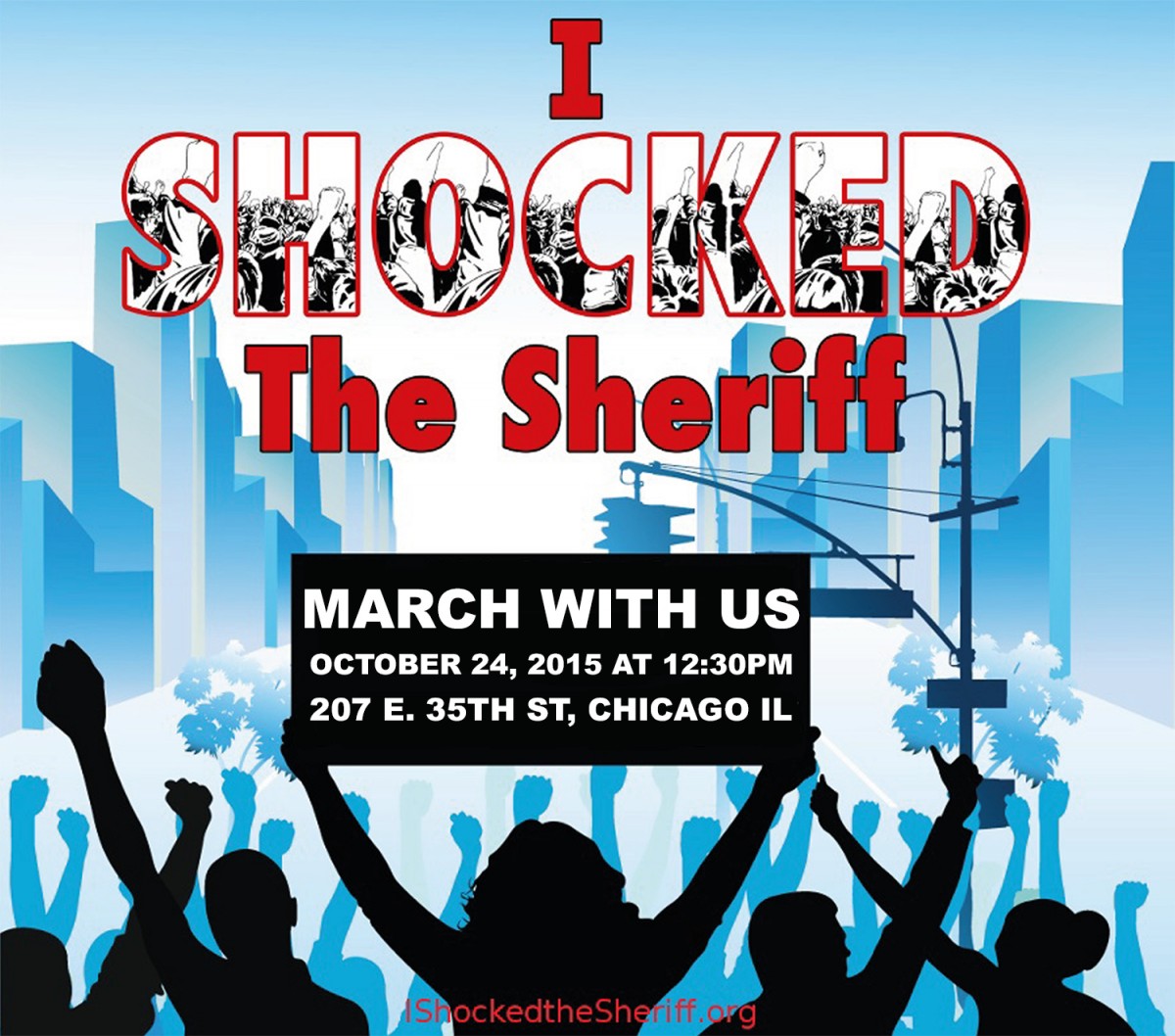 BYP100 led protest "I shocked the Sheriff" outside the Chicago IACPC in 2015 endorsed by Black Youth Project100 (BYP100), Malcolm X Grassroots Movement, Workers Center for Racial Justice, Ella Baker Center For Human Rights, Organization For Black Struggle (OBS), Southsiders Organized For Unity and Liberation (SOUL), International Socialist Organization (ISO), Chicago Alliance Against the Racist Political Repression (CAARPR), Black Alliance for Just Immigration, Project South, Students For Justice In Palestine (SJP), and more. Organizers of the protest at McCormick Place demanding IACP support the decriminalization of drug possession, community-controlled oversight committees representative of the racial, gender and ethnic makeup of those communities which have the authority to “investigate, subpoena, and file charges against police officers for misconduct,” an end to the collection of military grade weapons through the Department of Defense Excess Property Program 1033, and a reallocation of funds that invest in communities.

Read more on "I shocked the Sheriff" long and short terms goal from Rad Fag and check this image from the blockade of Martin Luther King Drive and 26th St for more than three hours: 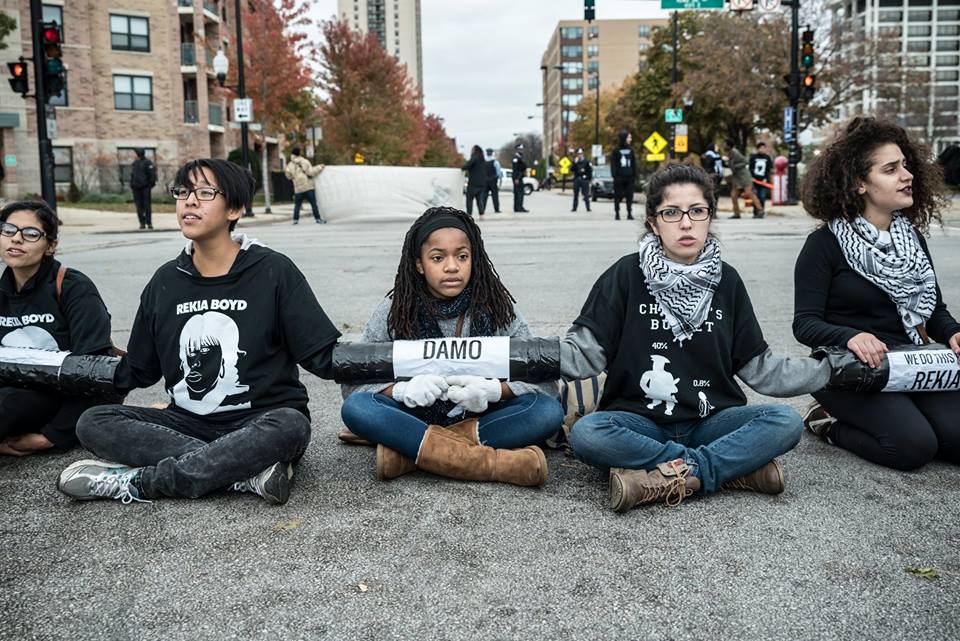