As the days that unfold before us mimic a time over a decade ago when the devastating War on Terror began with US occupation of Afghanistan, we mourn because it is makes us human. For those in Raqqa. For those in Tunis. For those in Yola and Kano, in Ankara, in Beirut, in Baghdad, in Zabul, in Paris, and beyond. But our grief cannot be exceptional. The lives of those living under systemic and perpetual invasion, war and occupation are not disposable and must be mourned and fought for. May our grief propel us beyond the commitments of world leaders using fear and outrage to justify military escalation in Syria. Beyond the global apathy and lack of media coverage for victims of militant groups in Nigeria and Kenya. Our mourning must transcend into calls for action and solidarity:

1. SOLIDARITY = PEOPLE’S STRUGGLE // Solidarity is first supporting people’s struggles for self-determination in the midst of international, state and armed forces’ violence. Those of us at the War Resisters League believe in lifting up those who use revolutionary nonviolence in their struggle for liberation under occupation and war. We see solidarity as lifting up Syrian and Iraqi social movement leadership, from feminists to labour organizers. Solidarity is centering the demands of Syrian, Iraqi, Yemeni, Palestinian, Afghan, Nigerian, Kurdish people and beyond.

2. SOLIDARITY = ANTIWAR // We equate solidarity with calls for de-escalation of military force and an end to all war with no exceptions. War breeds war. War breeds displacement. Launching more drones and cruises missiles, dropping more explosives, these compound the oppressive violence of displacement and mass killing. We know the war-cry pattern well: catastrophe, invasion, catastrophe. Instead of following the likes of Hollande, Putin, and Cameron that bolsters the damage wrought by U.S. and Gulf leadership in the War on Terror, we demand that resources go towards funding community organizing and diplomacy around the world--including restoring social fabrics suffering from austerity and war-making in our own country. We call on the antiwar movement to resurrect! We call for public outcry against militarism to be passionate and visible.

3. SOLIDARITY = REFUGEES WELCOME //  Unlike 27 American governors, we welcome refugees. Moreover, we demand that their lives - and those of asylum seekers and immigrants - be treated as human lives. Thus solidarity means opposition to those intent on closing borders to Syrian refugees, whether they are individual states within the US or entire countries like Poland. Border closures are ploys of the political right, predicated on xenophobia, racism, nationalism, and moral panic. Demonizing Syrian refugees essentially capitulates with the designs of Daesh/ISIS. Syrians remain dispossessed between the multiple brutalities of Assad, Daesh/ISIS and foreign militarism. We call for free movement and making decent lives possible within the US and Europe for those leaving conflict and climate catastrophes. Solidarity transcends borders.

4. SOLIDARITY = NO HATE, NO FEAR // Acts of solidarity entail dismantling Islamophobia.  This could range from speaking out against the public harassment of Muslims - whether committed by private individuals, police or government agencies - to raising funds for rebuilding mosques burned out of hatred. By scapegoating Black, brown and refugee communities the War on Terror has aided campaigns of xenophobic violence to reach across borders. We support Muslim and migrant communities caring for each other and creating community based systems for safety.

5. SOLIDARITY = NO WAR PROFITEERING// Solidarity is stopping the arms trade. War is business, and weapons manufacturers make a killing off of war cries, instability and conflict. Shares of large US weapons companies soared after President Hollande’s call for a “pitiless war”, from Lockheed Martin, to Raytheon, to Northrop Grumman to General Dynamics-- who produce arms from Tomahawk missiles and drones used in airstrikes against Daesh/ISIS to the large F-35 fighter-jet project. In addition to the defense industry, security industries across the west are both legitimized and reinforced with high-alert security statuses and the most militarized police activated to patrol the streets and conduct raids. Fear feeds the counter-terrorism industry, white supremacy and western dominance. Whether it is a one-off attack on a city, or perpetual and systemic military invasion and occupation of a country, the profiteers are the same: arms dealers and security technology companies.

Join us at the War Resisters League, as we call to end violence and militarism: no more airstrikes, beheadings, arms build-up or militarization of borders. We seek antimilitarist solutions beyond waving of colonial flags and closing of hearts.

Join us in our solidarity call for an end to violence and militarism.
No exceptions. No exceptionalism. 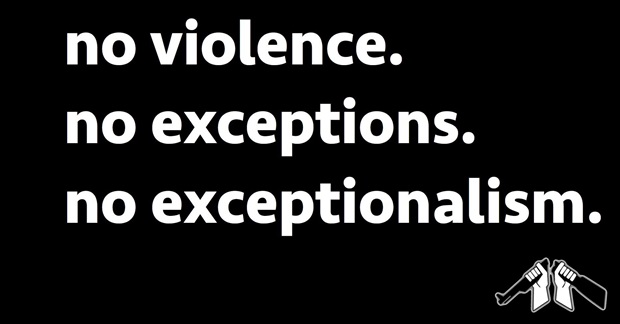 Further Readings//
French Muslims Resist the Lure of Fear by Anna Lekas Miller
We Are in Pitiless Times by Vijay Prashad
It Takes Roots: Statement on the Protest Ban in Paris by Global Grassroots Justice Alliance