The Women's Pentagon Action:
"No more amazing inventions for death"

"We are gathering at the Pentagon on November 17 because we fear for our lives.  We fear for the life of this planet, our Earth, and the life of our children who are our human future...

We have come here to mourn and rage and defy the Pentagon because it is the workplace of imperial power which threatens us all. Every day while we work, study, love, the colonels and generals who are planning our annihilation walk calmly in and out the doors of its five sides. To carry out their plans they have been making 3-6 nuclear bombs every day. They have accumulated over 30,000. They have invented the neutron bomb which kills people but leaves property and buildings like this one intact. They will produce the MX Missile and its billion dollar subway system which will scar thousands of miles of our western lands and consume its most delicate resource---water. They are creating a technology called Stealth- the invisible- the invisible, unperceivable arsenal. The have just appropriated 20 million dollars to revive cruel old killer nerve gas. They have proclaimed Directive 59 which asks for "small nuclear wars, prolonged but limited." They are talking about a first strike...

We are in the hands of men whose power and wealth have separated them from the reality of daily life and from the imagination. We are right to be afraid. At the same time our cities are in ruins, bankrupt; they suffer the devastation of war. Hospitals are closed, our schools are deprived of books and teachers. Our young Black and Latino youth are without decent work. They will be forced, drafted to become the cannon fodder for the very power that oppresses them...

The lands of the Native American people have been turned to radioactive rubble in order to enlarge the nuclear warehouse. The uranium of South Africa, necessary to the nuclear enterprise enriches the white minority and encourages the vicious system of racist oppression and war...

There is a fear among the people, and that fear, created by the industrial militarists is used as an excuse to accelerate the arms race. "We will protect you..." they say, but we never have been so endangered, so close to the end of human time.

We women are gathering because life on the precipice is intolerable. 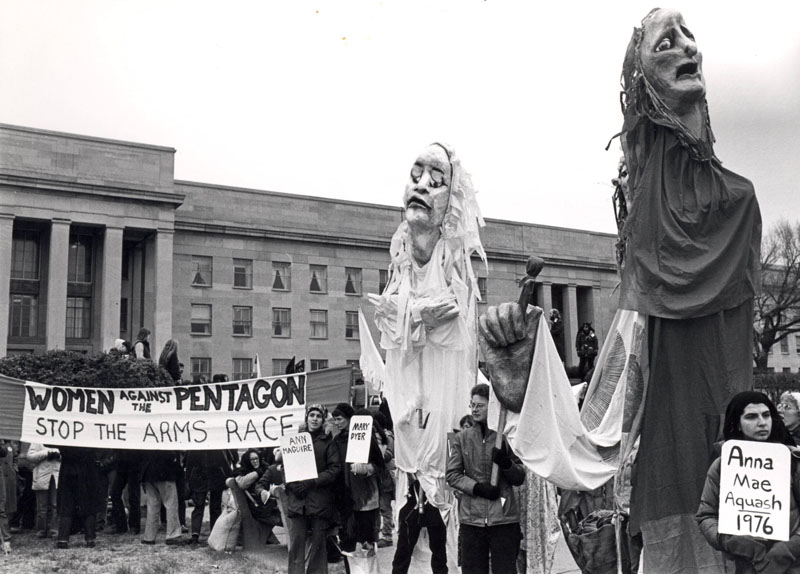 We want to know what anger in these men, what fear which can only be satisfied through destruction, what coldness of heart and ambition drives their days.

We want to know because we do not want that dominance which is exploitative and murderous in international relations, and so dangerous to women and children at home--we do not want that sickness transferred by the violent society through the fathers to sons.

What is it that we women need for our ordinary lives, that we want for ourselves and also for our sisters in new nations and old colonies who suffer the white man's exploitation and too often the oppression of their own countrymen?

We want enough good food, useful work, decent housing, communities with clean air and water, good care for our children while we work. We expect equal pay for work of equal value.

We want health care which respects and understands our bodies. We want an education for children which tells the true history of our women's lives, which describes the earth as our home to be cherished, to be fed as well as harvested.

We want to be free from violence in our streets and in our houses. The pervasive social power of the masculine ideal and the greed of the pornographer have come together to steal our freedom, so that whole neighborhoods and the life of the evening and night have been taken away from us. For too many women the dark country road and the city alley have concealed the rapist. We want the night returned, the light of the moon, special in the cycle of female lives, the stars and the gaiety of the city streets.

We have the right to have or to not have children, we do not want gangs of politicians and medical men to say we must be sterilized for the country's good. We know that this technique is the racist's method of controlling populations. Nor do we want to be prevented from having an abortion when we need one. We think that this freedom should be available to poor women as it has always been available to the rich. We want to be free to love whomever we choose. We will live with women or with men or we will live alone. We will not allow the oppression of lesbians. One sex or one sexual preference must not dominate another.

We want to see the pathology of racism ended in our time. There can be no peace while one race dominates another, one nation dominates the others.

We want the uranium left in the earth and the earth given back to the people who tilled it. We want a system of energy which is renewable, which does not take resources out of the earth without returning them. We want those systems to belong to the people and their communities not to the corporations which invariably turn knowledge in to weaponry. We want the sham of Atoms for Peace ended, all nuclear plants decommissioned and the construction of new plants stopped. That is another war against the people and the child to be born in fifty years.

We want an end to the arms race. No more bombs. No more amazing inventions for death.

We understand that all is connected. The earth nourishes us as we with our bodies will eventually feed it. Through us, our mothers connected the human past to the human future.

With that sense, that ecological right, we oppose the financial connections between the Pentagon and the multinational corporations and banks that the Pentagon serves.

These are connections made of gold and oil. 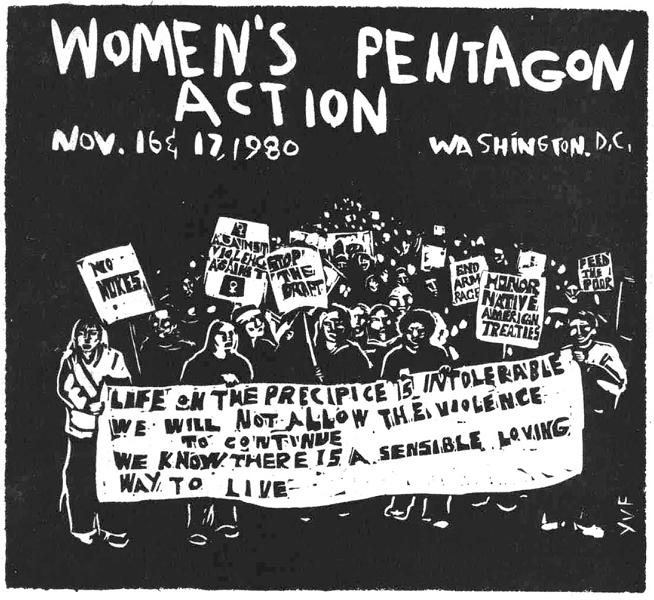 We are connections made of blood and bone, we are made of the sweet and finite resource, water.

We will not allow these violent games to continue. If we are here in our stubborn hundreds today, we will certainly return in the thousands and hundreds of thousands in the months and years to come.

We know there is a healthy sensible loving way to live and we intend to live that way in our neighborhoods and on our farms in these United States and among our sisters and brothers in all the countries of the world."

"Four huge female puppets created by Bread and Puppet Theatre led some 2,000 women in a march past Arlington Cemetery to the Pentagon. There they encircled the building, put gravestones in the lawn, wove yarn across the entrances to symbolically reweave the web of life, and created rituals of mourning and defiance by chanting, yelling, and banging on cans. Over 140 women were arrested for blocking the doors at two entrances. They also blocked the Mall entrance, but no arrests were made there. Most arrestees pled "no contest" and were immediately sentenced to 10 days for first offenders or 30 days—the maximum—for second offenders. Thirty-four of the second offenders who received longer sentences were shackled at the wrists, waist, and ankles and immediately sent 300 miles to a federal prison for women." -- Historic Pentagon Actions: 1980s to Present

"The story of women’s peace activism in the 1980’s is a testament to the transformative potential of public dialog." - conclusion from one of many studies about the action and women's peace work at the time: Peace Activist Women in the US in the 1980’s,
Ginger Hanks Harwood, LaSierra University