On August 9th of 2014, 18-year-old Michael Brown was shot dead by white police officer Darren Wilson, in the majority-black suburb of St. Louis, MO, Ferguson. Brown was unarmed, and according to multiple witnesses had his hands raised when Wilson fired the final shot. The salient features were emblematic of a longstanding, simmering crisis in the US, and the suburb exploded in protest, eliciting a predictable militarized response from police. Activists in Palestine began offering tips for dealing with teargas exposure, and #Ferguson began trending internationally on Facebook and Twitter. Overnight, a town even most Americans had not heard of became a global symbol of resistance to State violence and dehumanization.

When a grand jury failed to indict Darren Wilson, keeping pace with news of police killings of unarmed black men around the US in the intervening months, and the increasing mobilizations in response, something seemed to have shifted irrevocably. People who’d previously held some sliver of hope in the justice system began turning away from it, into the streets. The numbers in marches across the country swelled. Actions under the banner #BlackLivesMatter proliferated; documented on social media, and thus modeled for new people entering the movement, yielding a rapid sort of fractal growth reminiscent of the Occupy movement.

While #BlackLivesMatter has seized headlines off and on for roughly half a year –an impressive feat of movement longevity—conspicuously scant column space has been afforded the de facto renaissance nonviolent resistance has seen, amidst all of it. Many organizers have, quite rightly, sought to avoid getting mired in debates about tactics, which has had the effect of negligibly little overt discussion of the dynamics of nonviolent tactics being deployed on the ground. Yet these actions represent one of the most profound and widespread applications of such resistance in recent history, and have in many cases drawn the very hyper-militarized police responses they’ve sought to challenge – a sort of modern reiteration of the Student Nonviolent Coordinating Committee’s strategy with lunch counter sit-ins in the early days of the Civil Rights movement.

Perhaps more importantly, nonviolence is seeing crucial innovation and escalation in the hands of new generations, in regions not typically hit with such mobilizations – developments that demand serious consideration. Of particular note, tactics are increasingly being tailored to disrupt the normal rhythms of life beyond communities targeted by police violence, redistributing the costs of state brutality and white supremacy. More still, a shift appears afoot reorienting resistance from reacting to specific instances of police violence and impunity, to a generalized,proactive, coordinated confrontation – enabled by new networks and cross-community solidarity. In effect, a move beyond triage, toward proactive demands.

Joshua Stephens (@joshuacstephens) is a board member with the Institute for Anarchist Studies and an activist in anticapitalist and international solidarity movements. 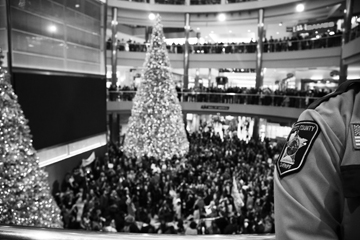 Black Friday sales, the day after Thanksgiving in the US, have been the target of anti-consumerist actions for some time. Typically, these have taken the form of people voluntarily refusing to shop. In 2014, “Black Friday” signified a foregrounding of black life, with shopping centers successfully occupied or shut down in three areas bordering Ferguson, MO, as well as San Francisco. Disruptions were similarly staged in other cities, with crowds seizing a major shopping corridor in Chicago, and doors chained at a number of Seattle outlets. Long- planned low-wage worker actions around the country also took up the movement’s demands, highlighting the intersection of police violence and economic exploitation in black and brown communities. Weeks later, 25 people were arrested at the Mall of America in Minnesota, as several thousand flooded the shopping center’s rotunda, chanting While you’re on your shopping spree, black people cannot breathe (a reference to the death of Eric Garner in New York, from a police chokehold). 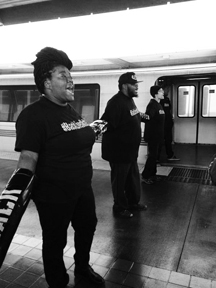 On November 28th, Oakland’s Blackout Collective
shut down the Bay Area BART metro system, locking themselves down in formations stretching from inside train cars, across the West Oakland station platform
(a major hub in the system), in memory of both Mike Brown and Oscar Grant, who was shot and killed while handcuffed on a BART platform New Years Day 2009. In response to the blockade, BART officials evacuated passengers and shuttered the West Oakland station, stopping service for over an hour. Fourteen were arrested. A similar, more impromptu blockade occurred a week later on the tracks of the Park Street Station of Boston’s T system, in conjunction with mass marches. 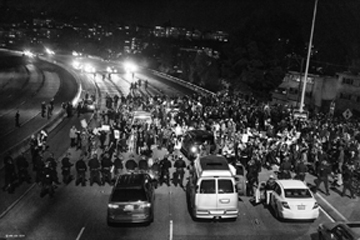 On Labor Day, a coordinated blockade of highways around Ferguson was staged. The action was quickly taken up in other cities, with highways seized and snarled as far-flung as DC, Los Angeles, Boston, Baltimore, Oakland, New York City, Nashville, Providence, Cleveland, and Durham, NC – some for multiple, consecutive nights. Hundreds of arrests resulted. In Jacksonville, FL twelve people blocked a stretch of I-95, while nineteen others shut down traffic on the Hart Bridge, for which they were later arrested. Speaking on condition of anonymity as charges are still pending (some of them quite serious), one participant explained, “I’m not an activist. I am just a man that has been moved to action.” Indeed, he explained, his first foray into activism felt like a matter of necessity. “You are literally waiting for death to strike close to home. Do you keep waiting, or do you demand change?! We chose the latter.“ 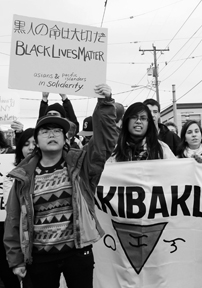 December 15th saw Oakland’s police department headquarters shut down for four hours and twenty-eight minutes (the time Michael Brown’s body was left on the street by police in Ferguson), surrounded by teams from #BlackLivesMatter and #Asians4BlackLives, while teams of white activists shut down adjacent intersections using lock-boxes. The action represented a significant escalation of nonviolent tactics, directly confronting police on their own terrain, and modeled emergent forms of solidarity between communities of color. Timmy Lu joined, moved by the Blackout Collective’s BART shutdown, and their call for solidarity from other communities. “As an Asian person in the US, I understood it was the Civil Rights Movement that reformed racist immigration policies that allowed my family to migrate to the US as refugees, and I felt it was important For Asians to resist being a model minority used to prop-up anti-black racism.” he said. “The action was an experiment in practicing solidarity, accepting local black leadership, and leading in turn to inspire greater action from other Asians.”

Roughly two weeks later, on the final day of 2014, Seventy-five activists “stormed the doors” of the St. Louis Police Department, seizing the offices and issuing its chief an eviction order, on grounds related to the police murder of Michael Brown, including charges the department had transformed the police “into a militarized occupying force” and imposed blight on black communities “in the guise
of protecting and serving.” The US Department of Justice’s recent report on Ferguson bore out their claims. Police responded with pepper-spray, arresting four. 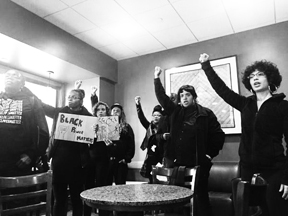 For several months now, activists in Oakland and New York have staged actions during conventional brunch hours, at popular cafes and restaurants, to remind primarily white patrons that a war is being waged on black and brown communities. Activists have typically entered, seized the attention of a room, and announced their purpose, asking patrons to stand and raise a fist in solidarity. On the surface, it’s easy to dismiss this as somewhat trite or silly. But at its core, the tactic is an innovative take on rather time- honored ones, as civil rights struggles go; forcing otherwise exempted populations to bear witness (even figuratively) to institutionalized violence embedded in and implied by their own comfort. It also allows participants to exact an emotionally-charged intervention, without much of the usual risk of violence or exposure to police that such interventions can invite. So far, no arrests have resulted, and the response among patrons has sometimes even been encouraging, Judging by the reactions of business owners, the press, and even Brooklyn’s borough president, these actions–despite being far less structurally disruptive-- have also been some of the most jarring and provocative for public figures.